How To Survive An Eastern European Winter (Video)

How To Survive An Eastern European Winter (Video) 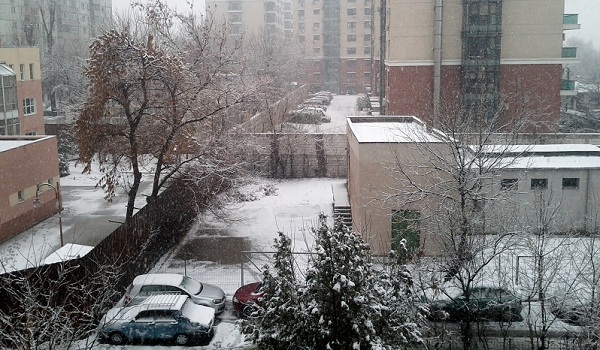 For the past six weeks, I’ve been in Bucharest, Romania, trying my very best to survive what, even for Eastern European standards, has turned out to be a cruel Eastern European winter. Snow and ice have been piled high, covering every inch of ground for quite a while now, and the temperature has consistently hovered around the -10 to -22C (14 to -4 F) mark.

About ten days ago, after meeting a friend in the city center, I actually had to walk back to the apartment where I’m staying in the middle of a blizzard. The taxis either refused to take me because of the road conditions or they wanted to charge me a ridiculous price and so, I just ended up walking instead.

I walked, for well over one hour, in the thick snow and icy rain, slipping, sliding and almost falling every few meters, with wind blowing in my face, icicles forming inside my nostrils, my eyes nearly frozen shut and my shoes offering as much warmth and protection as would a layer of tissues. As my nose dripped, head ached and my body weakened, every second became more challenging than the last to the point where I could no longer take actual steps and was moving forward through the use of tiny, barely-pick-my-feet-off-the-ground shuffles instead.

When I entered my friend’s apartment, I nearly collapsed, and had to force myself to stumble into the bathroom for a hot bath so that my body could thaw and just maybe not give up and die. I then downed a couple of cups of tea, put on my warmest of clothes, took a preventative flu medicine (didn’t want to get sick again) and laid down to rest.

Somehow, I survived, but I certainly learned a lesson that day. It was time to find a way to dress appropriately for this insane winter weather.

And after a little experimentation, I might have found the answer…

This video was inspired by a video post created by fellow traveler Niall Doherty over at “Disrupting the Rabblement” where he shows exactly what he’s carrying in his backpack during his current 4-year adventure. Be warned though, there is some nudity involved.

Any tips to share on how to stay warm during a brutal winter? I’d be most appreciative of any advice you could offer!