How To Deal With The Culture Shock Of Big Cities

How To Deal With The Culture Shock Of Big Cities 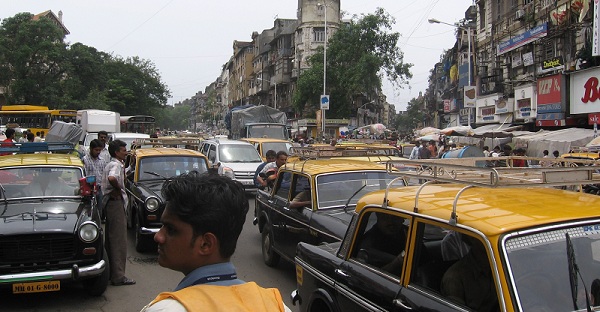 Arriving in a new country, especially if it’s your first time traveling, is almost guaranteed to be an intimidating experiencing. This is even more so the case if you’re starting off in a mega-city such as Bangkok, Mexico City, Delhi or Sao Paolo, among many others.

It’s one thing to ‘force’ yourself to get on that plane, often times alone, to head off to unfamiliar lands. But it’s another thing to suddenly find yourself in the midst of a chaotic, intense and shockingly overwhelming city only minutes after your flight arrives.

No wonder so many travelers are not particularly fond of the world’s largest metropolises! It makes perfect sense when our experiences in these massive cities tend to be of the ‘holy crap, this is crazy, get me out of here!’ sort, especially when our flight arrives at 2am, we don’t have a hotel room booked and we don’t speak the local language at all.

On my first independent backpacking trip, I remember all too well the 2am taxi ride from the Don Mueang International Airport to the Khao San Road area of Bangkok, where I immediately stepped right into the middle of what naturally appeared as a scene of indescribable insanity to my poorly traveled self at the time. The culture shock was instant and harsh and I found myself standing on the side of the road and on the verge of tears. I desperately wanted to hide in a hotel room but I had no idea how to go about finding one.

Tuk-tuks buzzed by me. Bar and restaurant staff yelled out to me. Vendors aggressively tried to sell me t-shirts and fake Ids. It was noisy, crowded, dirty and I was miserable.

Eventually, I walked into the first budget hotel I saw, paid the ridiculously inflated price they wanted to charge me and ran straight up to my room. And then I stayed right there in that room for 24 hours straight, staring out the window, too afraid to step foot outside once again.

And yes, I understand how crazy of a statement that is considering that I had been in Thailand for only one day and had really only seen one street in Bangkok…from behind a window.

But often times, that’s what happens when travelers arrive in such foreign destinations for the very first time.

AN ALTERNATIVE: GET OUT QUICKLY!

In my earlier years of travel, I quickly began to notice a common theme taking place. I simply was not enjoying any of the major cities I was visiting and in the end, it was also affecting my feelings towards the countries as a whole where those cities were located.

Every time I landed in a new mega-metropolis, whether it be Kuala Lumpur or Buenos Aires or Ho Chi Minh City, I always found myself repeating that all too familiar phrase of ‘get me out of here!’ within a couple of hours.

Luckily, that all changed on that one fine day that I arrived in Delhi, India. As I roamed the streets only a short time after my flight landed, the only thing I could think about was my desire to be somewhere else. I simply didn’t want to put up with the intense culture-shock and I was finding it very difficult to enjoy myself at all.

And that’s when I realized that if I found myself wanting to ‘get out of there’, then I should just get out of there. Why was I forcing myself to stay in a city that was so overwhelming? Why should I be walking around the streets frustrated and just waiting to leave?

So, the very next morning, after only 12 hours in Delhi, I made my way to the bus station and boarded a bus to the town of Rishikesh, a small, spiritual town set in the beautiful foothills of the Himalayas, along the holy Ganges River. And as soon as I arrived six hours later, I realized that this had been one smart move. Life in Rishikesh is significantly more peaceful than in Delhi. It’s not very crowded or chaotic, vehicles aren’t even allowed in parts of the town, and I had no problem finding a simple guesthouse with great rooms right on the edge of the water.

Relaxed and finally excited to be in India, I then proceeded to spend one week in Rishikesh, which I then followed with one month of travel through the laid-back mountain villages, towns and small cities of the Kashmir, Ladakh and Himachel Pradesh regions of Himalayan India.

Far from intense, this one month was calm and awe-inspiring, with day after day of incredible mountain scenery, rewarding human interactions and visits to isolated Tibetan communities that have remained relatively unchanged for centuries. This experience was nothing like being in Delhi, but at the same time, it was still India.

By the time I made my way out of the mountains, and after a three day stop in the medium-size city of Amritsar, I felt more than ready to once again tackle Delhi.

And tackle I did. What had been such an extremely shocking environment the first time around, now seemed quite fascinating. I was no longer overwhelmed. In fact, I was remarkably comfortable, even while walking around the densely packed markets of Old Delhi. Now I couldn’t wait to spend at least a week exploring every street and neighborhood I could find as every day turned out to be even more rewarding than the last.

LEAVE THE BIG CITIES FOR LATER

These days, whenever anyone asks me about traveling overseas, I usually offer a piece of advice based upon my experience above.

Just because you are flying into a major city, doesn’t mean you need to stick around upon arrival. In fact, it might be an infinitely better idea to get out of that ‘crazy’ city as quickly as possible and start your trip off by spending some time in a more relaxed atmosphere.

Not only will this help you adjust to the unfamiliar surroundings of a new country, especially if it’s your first visit or even your first international trip, but it will also help avoid negative thoughts and experiences that may affect your travels as a whole. It would be a shame for a traveler to claim that they don’t like India or Thailand or Turkey or Mexico simply because they become too overwhelmed upon arrival in Delhi or Bangkok or Istanbul or Mexico City.

So my advice would be to jump on a bus or a train or even a flight or a ferry to somewhere less intimidating as soon as you arrive. Wait until you’re comfortable in this new country and until the initial culture shock has begun to wear off before you head back to the big city and all of its chaos. It might take a week or two or even a month before you feel ready, but I’m confident that you’ll notice a major difference with this method.

Chances are you’ll actually enjoy the time you spend in that city and instead of screaming ‘get me out of here!’, you’ll be looking for ways to extend your stay even longer.

And as a side note, this method is not only for inexperienced travelers. I still skip past major cities upon arrival every now and then when I visit a new country. Sometimes I just don’t feel like putting myself through a hard-core adjustment phase and so I much prefer to start my adventure in a more relaxed setting.

Does this idea make much sense? Do you think it would help lessen the initial culture shock of arriving in a foreign country?