How To Avoid Being Ripped Off By Taxi Drivers

How To Avoid Being Ripped Off By Taxi Drivers

It happens. Travelers get ripped off. And it happens often.

One of the most common ways of getting ripped off involves taking local transportation and sometimes it seems as if we spend hours every single day trying to negotiate taxi or rickshaw or tuk-tuk fares wherever we go. And somehow, no matter how hard we try, we almost always end up paying infinitely higher prices than locals.

Of course, as soon as we find ourselves being ripped off by taxi drivers or once we learn that we paid much more than other travelers for the same journey, we are oh-so-quick to place all of the blame on the evil taxi or tuk-tuk or bicycle rickshaw driver who took our money.

After all, didn’t we approach the driver with a smile on our face, hand them a piece of paper with our destination scrawled in local script and then, just as our guide book instructs us to do, attempt to reach an agreement on the price before we entered their vehicle?

Yes, that’s exactly the steps we are trained to take and yet, we repeatedly find ourselves frustrated when the driver quotes us an extraordinarily high price for what we believe to be an extraordinarily short journey. Twenty-five dollars for a ride to the market? Come on, that’s a ripoff! It’s a good price sir. That’s ridiculous, I’ll give you five dollars. Five dollars? Impossible. Twenty dollars is my final offer. Are you nuts? No sir, fifteen dollars and we leave now. Fine, let’s go.

Eventually, too frustrated and tired to participate in this argument any longer, we accept the inflated price, climb into the vehicle and then proceed to spend days afterward moaning to every other traveler we meet about how everyone is trying to rip us off.

THE MYTH OF THE BROKEN TAXI METER

After eleven years of traveling, and I do admit that I only figured this out quite recently, I made a discovery that, for the most part, instantly eliminates the chances of me paying non-local, heavily inflated prices for transportation, no matter where I am in the world.

What I noticed is that it is only foreign travelers who approach taxis, tuk-tuks and rickshaws around the world and actually attempt to negotiate a price before even getting into the vehicle. If you take a moment to look around you, the locals in most places do not follow this method. Instead, they simply enter the taxi or step into the rickshaw and tell the driver their destination.

And off they go…with that all-too-infamous broken or missing taxi meter that all of us travelers are constantly reminded of, miraculously working just fine.

When’s the last time you’ve seen a local involved in an angry argument with a taxi driver over the fare? It almost never happens.

Why? Because there is almost always, despite what our guide books tell us, a fare system in place, even in the most undeveloped and chaotic cities of the world. Meters are used with more frequency than we’re led to believe and when there are actually no meters, there are typically government-set prices that drivers are required to charge.

Unfortunately, we travelers automatically assume that such a system couldn’t possibly exist in a place like India or Thailand or Syria and that the goal of every taxi driver must naturally be to rip us off. So we stroll up to the passenger side of the taxi, pop our head into the window and ask “How much?”, immediately indicating to the driver that we don’t know the first thing about how the local system works.

At that point, not surprisingly, the taxi or rickshaw driver might see this as an opportunity to earn some extra money and hence the higher than normal fares that we are forced to pay. They know we’ll agree to some random price in the end and that random price is going to be a lot higher than the local fare. 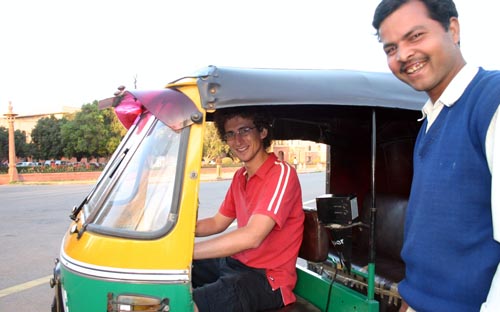 During my recent trip to the Middle East, I found myself at a restaurant one night with a handful of other travelers in the Syrian city of Aleppo. In between mouthfuls of hommus, tabouli and grilled eggplant, the conversation turned to taxi fares. The other travelers all complained that it was impossible to get a decent rate for a ride between two points within the city. They all spoke of paying 300 or 400 Syrian Pounds ($6 or $8 USD) for each ride after negotiating with drivers.

At one point, I asked them why they didn’t just have the driver use the taxi meter. “There are no meters in the taxis” was the immediate reply.

Well, every single taxi in Aleppo, Syria has a working meter and upon discovering this myself while taking a taxi ride with a local friend, I never had any issues with taxi fares at all. Whenever I needed a ride, I simply jumped in the back seat, informed the driver of my destination and paid the metered fare. A typical fare for a fifteen minute drive across the city was a mere 20 Syrian Pounds (40 US cents) and not once did a taxi driver try to tell me the meter wasn’t working or try to charge me a higher price.

Not a single other traveler I met in Aleppo had ever paid a metered fare. 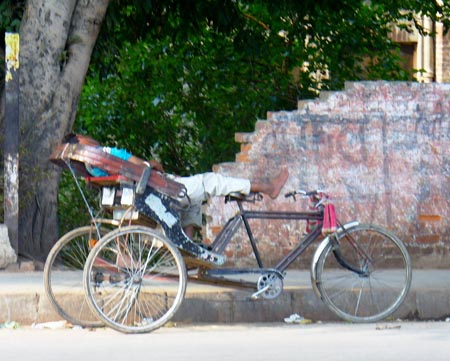 HOW TO PAY THE LOCAL FARE

Whenever I arrive in a new destination, before even stepping out of my hotel, guesthouse or hostel for the first time, or even the airport if I’m arriving by plane, I always make sure to ask a reliable local how the taxi system works. Such reliable people include the staff in the guesthouse, the official information booth at the airport or any other local who has no interest in leading me astray.

Do the taxis and rickshaws use meters? Do they have flat rates? How much should it cost to reach my destination?

With that basic knowledge, I no longer have to stick my head into a taxi window while pointing at a page in my guide book that explains how much I should pay, or in other words, announcing to every taxi driver in the region that I want to negotiate for something that is generally not negotiated for, which will always be a losing situation for us travelers.

By giving the driver a friendly nod and getting into the vehicle without asking ‘how much?’, I’m in a much better position to enjoy a peaceful ride for a local fare. This tells the driver that I already know how much the ride should cost and that this is not my first experience (regardless of whether or not it is) using a taxi in this city.

Not only does this save money, but it saves time and even more importantly, it saves us from all of that unnecessary frustration that we carry around in response to being ripped off by taxi drivers every time we need to go somewhere.

IT WORKS ALL OVER THE WORLD

In the past two years alone, I’ve put this method into place while traveling through India (yes, even in places such as Delhi the taxis and rickshaws have and will use their meters), Thailand, Mexico, Central America and more. And the number of times that my attempt to use the local system ended up in an argument over the fare could be counted on one hand.

Of course, if we attempt the local method in a heavily-touristed area like Khao San Road in Bangkok, then we shouldn’t expect much success. When we are surrounded by hundreds of other travelers all willing to lead themselves straight into the trap of being ripped off, chances are the taxi driver we approach will prefer to wait for the next person to come along. Instead, if we walk five minutes away from such a touristy area, the situation will be much different.

Along with receiving the local fare, we might actually interact with our driver as well, as opposed to holding a life-long grudge against him for leaving us no choice but to accept the inflated price that, in reality, we brought upon ourselves.

Any taxi experiences to share or advice to add? What method do you use to try and avoid paying higher fares while traveling?