How Much Would You Pay This Rickshaw Driver In India?

How Much Would You Pay This Rickshaw Driver In India? 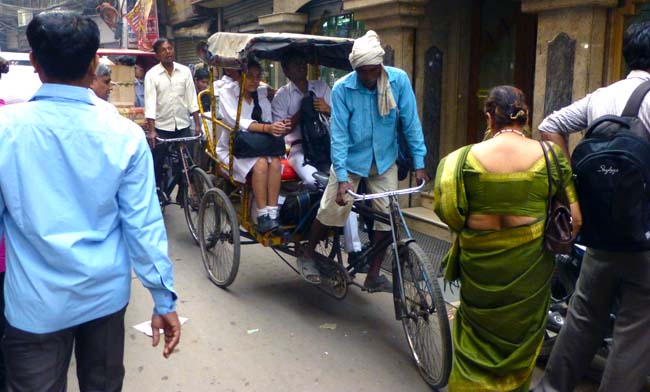 It’s not a quiz. It’s not a contest. I’m genuinely interested in learning how you would handle the following situation.

Three days ago, I spent two hours in the heart of Old Delhi with a friend of mine who happened to be in the city as well. We wandered through the lanes of Chandni Chowk market, listened to the music inside of a Sikh temple and ate lunch at my favorite parantha-wallah. It was my typical routine. Every time I return to India, this is what I do on my first day in order to get re-adjusted to being back in this country. After lunch, I normally head back to my hotel for an afternoon rest as this is about the time when the long flight and time zone change start catching up with me.

The distance between the part of Chandni Chowk market where we finished wandering the other day and Paharganj, the area where each of our hotels were located, is about 4 kilometers (2.4 miles), and while I’ve walked that route on dozens of occasions, sometimes I just feel like taking a bicycle rickshaw. On this particular day, that was the case.

I went up to a rickshaw driver and asked him how much the ride would cost. He told me 100 rupees, a fare that translates to about $1.60 USD. And even though I knew perfectly well that a local Indian would probably pay a lower fare than this, I accepted his rate anyway. I personally don’t like to bargain when the difference I’m bargaining for would be around 50 cents or less.

The ride back to Paharganj began, and within minutes we were stuck in that famous Delhi traffic consisting of cars, trucks, buses, motorcycles, bicycles, bicycle rickshaws, auto rickshaws, pedestrians, bull carts and plenty of other vehicles that fill the streets. And I don’t know if you’ve ever seen how a bicycle rickshaw works, but these poor quality contraptions are not easy to put into motion when you have two people sitting in the back. It takes some strength to pedal these rickety things out of a complete stop, especially considering that the driver is usually not very big or strong due to the difficulty of his job and lifestyle. And here we are in traffic, our driver having to stop and go hundreds of times, not to mention being banged into by rickshaws behind us every few seconds, being yelled at by other motorists and constantly having to swerve out of the way of larger vehicles honking their horns and driving dangerously fast down the road. There is also a never-ending stream of unavoidable potholes, protruding manhole covers and random debris that the driver must navigate as well, leading to plenty of rough bumps and metal-cracking jolts.

Our ride went on, slowly. Ten minutes, fifteen minutes, twenty minutes. Our driver pushed forward as best he could, his face dripping in sweat from the 30C heat as we inched along in the midst of that Delhi chaos.

Eventually, after forty minutes of struggling, our rickshaw driver arrived at a long vehicle bridge that stretches over the railway tracks, a bridge that would lead us to our destination. He began pedaling us up the bridge but after 200 meters the incline was too steep for him to cycle us any more and so, as is the norm, he jumped off his seat and pulled us up the rest of the way. Not only did he have to pull us up, but he still had to dodge the usual intense traffic at the same time. Then, once we reached the center point of the bridge, the driver climbed back onto his seat and started pedaling once again.

A few moments later we reached Paharganj, some fifty minutes after we had left Chandni Chowk. Normally, this ride takes about twenty minutes. My friend and I got out of the rickshaw and we handed over 100 rupees. The driver thanked us, smiled and wiped the sweat from his forehead. And then, just before I turned away, I noticed a helpless look in his eyes as he stared at the 100 rupee note in his hand. It was a look that seemed to say, “What a life I have. To work this hard for this amount of money.”

I hesitated for a second before I walked away. For the next few hours though, I couldn’t get the look on this man’s face out of my head. And I felt quite terrible.

Yes, it is his job to take us to our destination for the price he quoted. Yes, ending up in traffic for thirty minutes and working much harder than anticipated is a risk of that job. Yes, 100 rupees is likely too high of a price already, although definitely nothing to be considered a rip-off.

(I was recently told by a local in Delhi that a cycle rickshaw should cost around 15 rupees per distance that would take 10 minutes to walk. And since it would have taken us 1 hour to walk from Chandni Chowk to Paharganj, the correct price should be around 90 rupees, not much of a difference from what we paid.)

But regardless, I personally think he deserved more, at least from me. Bicycling my ass around for thirty more minutes than planned, in the absurd Delhi traffic, sucks, simple as that. Again, I know it’s his job but it still sucks, especially when the reward for that effort is $1.60.

Keep in mind that the $1.60 is not pure profit for this guy. Many bicycle rickshaw drivers earn less than 100 rupees per day but since many also can’t afford to own their rickshaw, they have to rent one, an expense that can eat up 50% of a day’s earnings. In addition, the remaining money is often sent to the driver’s wife and children back in their home village, leaving practically nothing for them to survive on. Hence the reason why so many drivers sleep in their rickshaws at night. They can’t afford to sleep anywhere else.

That’s why, after thinking about it, I reached the conclusion that I should have paid my rickshaw driver more the other day, maybe another 50 rupees or so. To me, that would have been right considering the situation.

He earned that money and he needs that money, far more than I do.