How Much It Costs To Travel In Lebanon

How Much It Costs To Travel In Lebanon

In comparison to neighboring Syria, Lebanon is an expensive country to travel around. This is not only due to the higher prices, but also due to the availability of excellent restaurants, endless cafes and bars that never fail in enticing travelers to stop in for just one more drink. And that’s not to mention the French bakeries serving delicious cakes! You can basically find anything you want in Beirut and as a result, travelers tend to spend a bit more.

The ultra-budget travelers among us could possibly survive in Lebanon for about $25 USD per day, but this would require you to once again sleep on rooftops and eat little more than Middle Eastern sandwiches. And on this budget, you’re mode of transportation will have to be your own feet, with perhaps the occasional shared taxi thrown in.

For those interested in a little more comfort and activity, be prepared to spend around $50 USD per day for a private budget hotel room, more frequent sit down meals, taxi rides and a daily cup of coffee from one of Beirut’s interesting cafes.

And if you decide to test out Beirut’s famous nightlife, you could easily double your daily expenses just from dishing out money for the entrance fee to a nightclub and paying for one beer!

Here’s a more detailed look at the costs to travel in Lebanon: 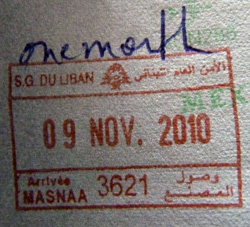 Obtaining a visa at the border is quite straightforward for about 100 different nationalities, all of which are offered a free one-month visa upon arrival. In addition, these visas can easily be extended for up to three months if needed. Most other nationalities can also receive a visa at the border although they may have to pay for it. According to the sign in the immigration office, the fees range from $10 USD – $50 USD depending on the length of your stay.

Budget accommodation in Lebanon is quite basic. Don’t expect spotless bathrooms, outstanding service or much organization for the money you spend. The lack of decent budget hotels was actually quite surprising in Beirut as there really isn’t even an actual hostel-type operation. Instead, there are about five cheap hotels that offered little more than a thin mattress to lay your head. 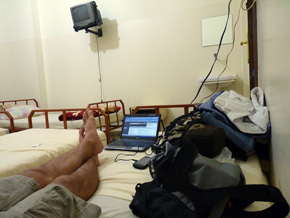 Most hotels do not include breakfast, although they may throw in some complimentary tea and coffee if you’re lucky.

Dining in Lebanon proved to be more tricky than I would have imagined. Budget options, such as shawarma and falafel stands, while not plentiful, are scattered around, while more expensive cafes and restaurants are much easier to find. Here’s what to expect…

If you’re willing to spend a little more, you will have endless options, especially in Beirut where you can find not only traditional Lebanese cuisine, but Mexican, Japanese, Italian, French, Chinese, Indian and more. And if you’re really looking to splurge, you’ll have no problem finding a restaurant where $200 USD will barely cover a dinner for two!

Upscale meal in downtown Beirut – 60,000+ LL per person for meal with wine

In Lebanon, especially in Beirut, vegetarians will have no problem at all finding good food. There are plenty of mid-range cafes and restaurants offering salads, vegetarian soups and other vegetable dishes on their menus. In Beirut, simply head to Hamra Street or the Gemnayze neighborhood for the best options. 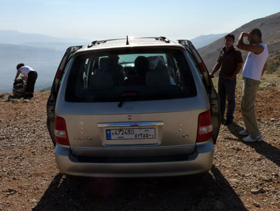 For destinations such as small towns and villages located in the mountains, there may not be regular bus or minivan service and as a result, the only way to reach these places (such as Beit Eddin, the Cedar Forest and Mleeta) are by actual taxi. The best idea is to take a public bus to the closest major town and negotiate a taxi from there as booking a taxi from Beirut for long day trips tends to be quite expensive. For example, you can expect to pay around $10 per hour to hire a taxi from the town of Saida in order to visit some of the interesting areas of Southern Lebanon.

In most towns and cities (including Beirut), walking is definitely the best way to get around, although when you do get tired, you can always flag down a servis (shared taxi) which will take you to your destination for around 2000 LL while picking up and dropping off other passengers along the way. There are also plenty of public buses in Beirut that will eventually get you to where you need to go for a very cheap fare.

*The four hour overland journey between Beirut and Damascus can be done either by bus for 500 Syrian Pounds ($11 USD) or by share taxi for 800 Syrian Pounds ($17 USD). Simply show up at the bus station in Damascus or Beirut (Charles Helou Station) and you’ll have no problem finding the ticket offices or share taxis. Actually, the drivers will find you quite quickly! You don’t need to make reservations ahead of time and transportation runs throughout the day. 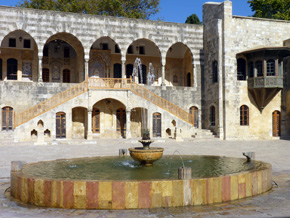 There isn’t much consistency to the entrance fees in Lebanon and you can expect to pay anywhere from 2000 LL to 12000 LL in order to enter any ruins site, museum, palace, caves, Cedar forest, castle, etc. All sites will accept payment in either Lebanese Lira or in US Dollars.

For those who need to spend a decent amount of time working or blogging or just checking emails, you’ll find plenty of cafes, restaurants and bars in Beirut that offer Wi-Fi. Just sit down, order a drink for around 5000 LL and nobody will bother you. However, the speeds and strength of the connections definitely vary from barely existent to quite decent, so sometimes it may be difficult to really get anything accomplished. The two best places I found were Saifi Urban Gardens in Gemnayze, which is a quaint and quiet outdoor cafe that serves cheap food and drinks, and Brisk, a cafe on Hamra Street that offers freshly prepared, ultra-healthy salads and sandwiches for 4000 – 7500 LL and whose friendly staff don’t mind at all if you spend a few hours using their Wi-Fi.

Actual internet cafes aren’t as common in Beirut as I expected, with the two most popular and reliable cafes located on Bliss Road right in front of the American University of Beirut. An hour of fast internet costs 3000 LL at each.

Outside of Beirut, most towns will have at least one decent internet cafe but available Wi-Fi signals become quite rare.

Earning money in Lebanon is definitely a possibility and I met a handful of travelers who had found some sort of work here. While many were teaching English (and earning about $10-$15 USD per hour), others were working at cafes, bars or even making their way as yoga or meditation instructors.

Wages are not nearly as high as you would think given all of the wealth that is present in Beirut, so Lebanon might not be the best of places for travelers looking to reboot their bank account. But if you’re less concerned about the amount of money you earn and more interested in the cultural experience, then any job you could find in Beirut would surely prove to be most rewarding.

Of course, I was only in Lebanon for a short time and didn’t really search for work opportunities, so I’m sure that there are other possibilities out there that I simply didn’t discover. (If anyone knows of any, please let us know in the comments!)

If I’ve left something out or if you have any questions about the cost of traveling in Lebanon that I failed to answer, please leave a comment below or send me an email!