How I Carry My Money While Traveling

How I Carry My Money While Traveling

By this point in my travels I think I’ve tried it all when it comes to carrying around my money and credit cards while on the road.

Sitting here right now I can only chuckle and shake my head as I recall my inexperienced and frightened traveling self carrying around a money belt during my first trip abroad. That money-carrying option lasted only six months, until I realized that my money belt actually made my life more complicated. I happily discarded it one day while in the town of Mae Sariang in Thailand.

With the money-belt gone, I immediately switched back to the standard method of money-carrying – the wallet. And over the following two years I went through a variety of wallets, mostly cheap ones found in local markets around the world, in an attempt to find one that fit my needs perfectly. Of course, this mission was never successful, although, I still preferred any old wallet over a money belt. But the wallet was bulky, especially when keeping it in my side pocket in the hopes of deterring pickpocketing folk in some of the countries I visited.

Anyway, I certainly didn’t quit my search for a better option.

While working on board a cruise ship in Hawaii, a fellow crew member and good friend of mine once told me that he had faced a similar money-carrying issue as myself. His solution was remarkably simple – a rubber band. I loved the idea and immediately ditched my wallet. My bulky pockets vanished and my money and credit cards never got in the way of my movements. Unfortunately, this only lasted for 2 days, at which time the rubber band broke.

Luckily, all I needed to do was find another rubber band. And even though they broke on a somewhat regular basis, I stuck with this method of money-carrying for just over one year. I eventually gave it up after spending an unsuccessful 2.5 hours searching for a new rubber band one day while in Montego Bay, Jamaica, with my cash and credit cards bouncing around like wild, misbehaving children inside of my shorts pocket.

By the end of those 2.5 hours, I simply wanted nothing to do with rubber bands and so I made the bold decision to abandon all types of money-carrying equipment, to rebel against every method that had ever failed me. Now, when Earl the Rebel would go out, he would just grab his pile of cash and credit cards, chuck it into his pocket, any pocket, and proudly flaunt the chaos and disorganization that resulted.

For two years I carried on in this manner.

UPGRADING TO A HIGH-TECH SYSTEM

It was not until I was backpacking through the Hindu Kush mountains of Pakistan that I started to question the usefulness of my ‘pile of chaos’ method. After all, I was about to cross the border into Afghanistan and certainly such a trip warranted a money-carrying system far more secure than any I’d ever tried before. So a few days before making the overland journey to Kabul, I bought a tough velcro wallet, two rubber bands AND a small chain in the ‘thieves market’ in the Pakistani city of Peshawar.

This high-tech wallet system did prove useful in Afghanistan. My cash and cards remained secure at all times as everything was in one bundle, attached to my belt with that chain, allowing me to quickly and safely pull out money while standing on a street corner buying a bag of raisins.

However, the problem occurred when I flew to Delhi a few weeks later, where I decided not to use the chain any more. And on my very first night, someone pick-pocketed my wallet as I walked through a market.

With wallet gone (along with several hundred dollars in cash and all of my credit cards), I didn’t know what to do. So I bought a cup of tea from a street vendor using the change I found in my other pocket. And then I drank that cup of tea.

And as I sipped away I noticed a man buying a hand towel from a street stall next to me. When it came time to pay for his towel, this man pulled from his pocket something that I knew existed, but had never thought to use myself. The answer to all of my problems shone brightly in my face in the form of a well-polished, silver money clip. 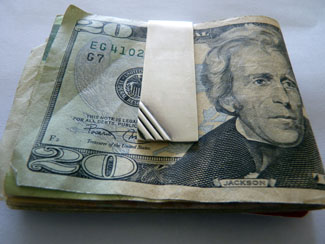 My first money clip – a narrow, thin, yet sturdy, clip – was purchased in a shop in the town of Savannah, Georgia the day after returning from India. And from the moment I inserted my money and credit cards into this clip, I knew that my long search for the ideal money-carrying system was closer to an end than ever before.

This clip had just enough flexibility in its curve to effortlessly handle both a small pile of cash as well as a large stash of bills and credit cards and so, together we went across the world, this money clip and I, visiting places such as Hungary and Croatia, Argentina and Uruguay, Myanmar and Thailand and Egypt and Jordan.

For 3 years we traveled the globe, during which time we were inseparable, with my long-dreamed-of goal of keeping my money well-protected and organized at all times finally having been achieved.

It was not until 2009 that our bond came to an end. We were at the beach on the island of St. Thomas and as I added a five-dollar bill into my money clip after paying for a Corona, the clip just snapped, too weak from years of dedicated service to carry on any further. Heartbroken, yet thankful for the time we had spent together, I had no choice but to lay that money clip to rest in the white sands of Emerald Beach, leaving it free to relax to the soothing sounds of the gentle waves forever.

I have a new money clip now, but it’s not nearly as reliable as my old one. This one often refuses to hold my money tight if I only have a few dollars to hold and sometimes I’ll reach into my pocket and discover that my credit cards are sticking in every possible direction. With that said, we somehow manage, and I still find that a money clip is the most useful method of carrying money while traveling around the world.

But the reason I’m writing this post is because sometimes, the challenges of my current money clip become too much to handle. Today is a good example. While trying to pay for a half dozen bagels at the supermarket this morning, I pulled out my money clip and found that it had failed me yet again, leaving my cash and credit cards and driver’s license all tangled up in one giant mess. Money soon fell to the floor, credit cards were scattered on the counter and I stood there helpless, never before having felt so unorganized in all my life.

The young woman at the cash register looked straight into my eyes at one point and tried to comfort me with her smile. She then shook her head ever so slightly, as if to provide an answer to the question bouncing around my head at that very moment.

That question was…“What is the point of using a money clip if that clip doesn’t actually clip anything together?”

How do you carry your money around while traveling? Have you found the perfect solution?