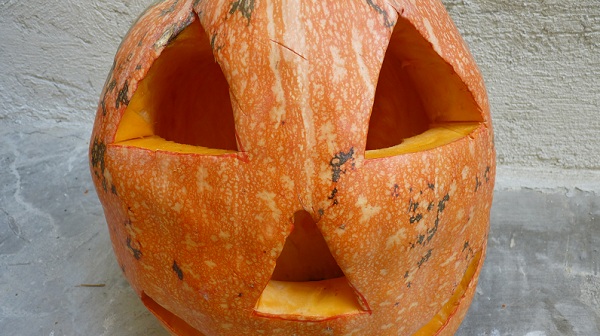 The fact that I ended up celebrating Halloween in Transylvania was a complete accident as, after twelve years of traveling, I barely remember when most holidays take place. I had actually forgotten that Halloween was nearly upon us when, just about ten days ago, a fellow traveler I met in Belgrade happened to ask what my Halloween plans were while in Romania.

Fast forward to 6pm on October 31st and I find myself, along with fellow travelers Jerry (Mexico) and Margunn (Norway), walking out of my guesthouse in the medieval town of Sighisoara, located in the heart of Transylvania. The three of us were the only guests in the guesthouse and after a quick chat over hot tea in the communal kitchen, we had decided to venture outside in search of a memorable Halloween experience in the land of Dracula.

Our adventure began with a cautious stroll along the impossibly dark path that follows the Tarnava Mare River, where we encountered mere shadows of other human beings, the vague outline of their mysterious figures floating past us in complete silence.

We then crossed the river using the footbridge located below the Old Town, with only the distant moonlight to guide us across. And as we reached the other side, we noticed that the town seemed quiet, too quiet, with not another person around, something that we were definitely not expecting on Halloween in Transylvania.

We wandered the town for ten minutes, eventually choosing to walk through the doors of a small restaurant located on the edge of a small plaza, one of only two restaurants that appeared to be open. And while there were no pumpkins, no costumes and no indication whatsoever inside of it being Halloween, there were a few grumpy staff members who proceeded to serve us hearty portions of chicken goulash and polenta and who kept our mugs filled with plenty of Ursus beer.

After an hour and half, with stomachs satisfied and courage superficially increased, we returned to the streets, seeking that Halloween excitement we had come to find. But alas, our search was fruitless. The town of Sighisoara remained empty, with no sign of activity, no gatherings and not a party anywhere to be joined. We stood on a lonely street corner, with the lip-cracking wind smacking against our faces and our minds dreaming of the warm beds awaiting us back on the other side of the river.

Without saying a word to each other we lowered our heads and began to walk in the direction of our guesthouse, heading back, forced to accept that Halloween night in Transylvania would be a bust.

A SUDDEN CHANGE IN HALLOWEEN PLANS

Upon reaching a confusing intersection of side streets and narrow lanes, the three of us all hesitated, not exactly sure of which direction to turn. We looked all around us, even behind us, wondering exactly when we had lost our way. But then, as we struggled to decide our next move, it was Jerry, our Mexican companion, who broke the silence.

Jerry suddenly suggested that instead of returning to our guesthouse, we should wander up the hill and into the citadel, the walled medieval part of town. Not only that but Jerry also felt that we should continue even further, by climbing the 160+ steps that led to the very top of the hill, where the lonely Church on the Hill and a massive Lutheran graveyard were located. After hearing this suggestion, Margunn and I argued and fussed and complained about the cold for several minutes, but Jerry would hear none of it, remaining persistent in his attempts to add some spice to this evening.

And soon enough, we gave in, not so much because we wanted to hike fifteen minutes uphill to the graveyard at 9:00pm but more so because we no longer wanted to be standing on this street corner shivering.

THE GRAVEYARD ON THE HILL 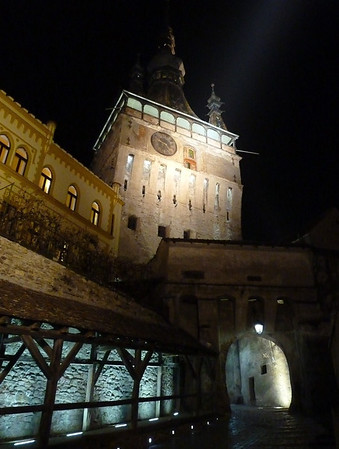 A few minutes later, we entered the large gate under the citadel’s imposing Clock Tower that marks the entrance to the fortified town of Sighisoara. We proceeded to walk through the town itself, as quietly as possible, as our steps were the only noise to be heard throughout this maze of cobblestone streets. It appeared as if we had the town to ourselves, with the actual residents remaining warm and safe inside their homes, and other travelers not daring to venture into the hometown of Vlad the Impaler (Dracula) on Halloween.

Creeping along, we turned left and we turned right, we passed a creepy tree and an ATM machine. And then, at the far back end of the town, we entered the seemingly infinite covered wooden stairwell that led from the town itself up to the topmost section of the hill.

We climbed up the creaky steps, speaking no words as our hearts pounded out of our chests every time the bushes next to us inexplicably rustled and the faint sound of a blender was heard coming from a house below. We were in no rush at all as none of us knew what to expect once we reached the top.

Of course, once we did climb that final step, we were not surprised to discover that we also had the highest point in town, this hill, all to ourselves as well and after a quick walk along the dirt path that circled the shining white Church, there we stood, all alone, in front of our final destination. There before us was the Lutheran graveyard, set inside a forest of both trees and impenetrable darkness, and surrounded by the type of black metal fence, which was some two meters high, that is clearly meant to keep people out. Yet despite the sword-like spikes on the top of this very fence, we knew right then and there that nothing was going to deter us from properly celebrating Halloween in Transylvania.

So, over the fence we all climbed.

The dried leaves crumbled beneath our feet, the branches cracked in the wind and our breathing created a misty haze over the tombstones that only seemed fitting. We slowly inched forward, not sure what to do, or where to go, but riding high on the thrill of being in such a place on this very night. 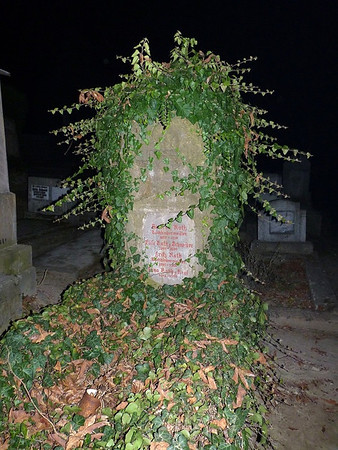 With every noise we heard we stopped moving and looked at each other, as if any of us could determine whether that noise was a sign of real danger. Should we turn around and run straight back to the fence? None of us knew…and so we just continued heading deeper and deeper into the graveyard.

At one point, we each started taking photos and before we knew it, our confidence had grown even more. So, we took even more photos, pointing out the ghosts and ghouls we thought we saw in almost every shot, and no longer paying attention to our surroundings or the fact that we had just broken into a spooky graveyard.

As we approached one particular set of tombstones, we noticed several black cats, one perched on top of a grave, one in a tree, one bouncing all over the place, and soon enough, one sitting comfortably on my head. I’m not sure where that falls on the spectrum of luck, but the only natural thing to do was take some photos of that too.

And then, some ten minutes after we had pulled out our cameras, we were brought back to reality upon hearing the dogs. We heard barking, wild and ferocious barking, but we couldn’t determine from where it came. At first, we tried to ignore it by wandering even deeper into the forest graveyard (great idea I know), deeper and deeper into the unknown, but every now and then another evil bark was heard and we would immediately freeze up, once again unable to decide whether this would be a perfect time to bolt.

When a few minutes would pass without hearing the dogs, we would naturally return to taking more photos until the next round of barking commenced, a process that repeated itself for over an hour as we continued to tiptoe around the graveyard and occasionally exchange high-fives with each other for being so brave on Halloween.

However, eventually, a time came when the wind seemed to greatly increase in strength, the barking became more frequent and the trees and tombstones began whispering (so it seemed). And this is when we reached the conclusion that it was now time for us to retreat. In an instant, we all turned around and sprinted back towards the fence, hopping over tombstones, tripping on branches and feeling as if our lives were suddenly in great danger.

Each of us chose a different section of the fence to climb back over, and it was by no means an easy climb at all. As soon as I tried to rush myself, I got my foot stuck on one of the metal spikes and nearly landed on the ground face first.

But I made it, as did the others, and soon enough, we all met up in front of the Church on the Hill, having successfully escaped from the Lutheran graveyard of Sighisoara on this most haunted of nights. 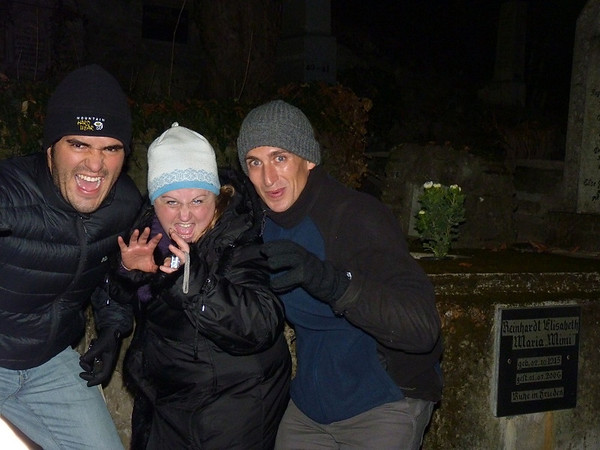 With a quick stop at the Dracula’s Restaurant inside the citadel in order to catch a glimpse of the only known image of Vlad the Impaler (thanks to Gary from Everything-Everywhere.com for letting me know about this painting), we once again crossed the cobblestone streets, wandered through the main gate under the Clock Tower and returned to the part of Sighisoara that lay below the hill.

Once on safe ground, standing right in front of the restaurant where we earlier ate, the three of us exchanged one final round of high-fives, and yes, we took a few more photos. And then we easily found our way back to the footbridge this time, walked along the river and down the street to our guesthouse, where we quietly settled into our beds, our Halloween night in Transylvania having thankfully come to a safe end.

*Note: The only reason I say ‘thankfully’ is because the next morning, Jerry had an interesting conversation with the owner of our guesthouse. It turns out that when the graveyard is closed every night, four Rottweilers and four Dobermans are released in order to protect the area until morning. And apparently last year two people were killed when they climbed the fence, tried to explore the graveyard and were promptly attacked by the dogs. Now you can understand how thankful I truly am to have made it out of that graveyard alive on Halloween.

So how was your Halloween? I’d love to know what kind of craziness (or lack of) you were up to as well!