My Galapagos Trip Was An Experience of a Lifetime

My Galapagos Trip Was An Experience of a Lifetime 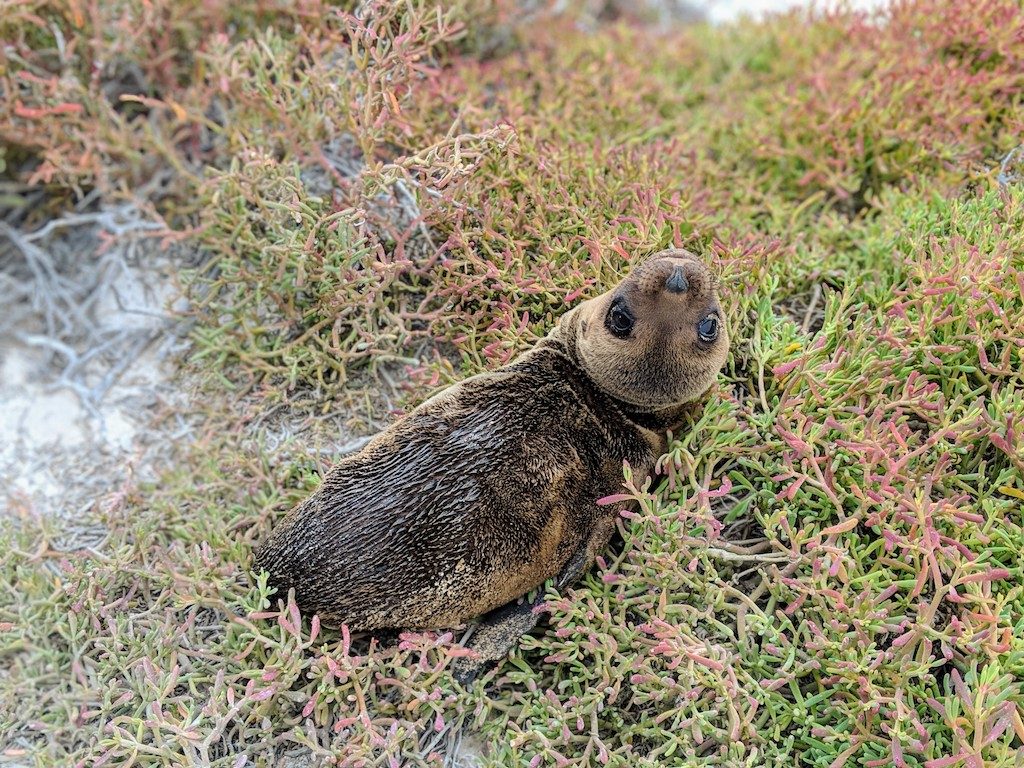 As I stood outside the tiny airport on Baltra Island, I was quite eager to get this adventure started. I could barely even chat with the 12 other people around me. My Galapagos trip with Andando Tours, on board the S/S Mary Anne sailing vessel, had now become a reality.

Eight days later, I was right back in front of that very same airport once again, and I could still barely chat with those around me. This time, however, it was because I simply didn’t want my Galapagos trip to end.

What happened in between is quite a tale.

It’s a tale of expectations being far exceeded. They were exceeded not because the initial expectations were low but because no matter what one’s expectations, there is no way to fully prepare yourself for the awesome experience that is the Galapagos Islands.

When an adorable baby sea lion scratches its belly for two minutes straight, when a bright red crab hangs out on a lava rock right next to a huge multi-colored land iguana, when two albatrosses engage in a beak to beak mating ritual, when a white tip shark swims right by…that’s a typical day while exploring these islands.

And that’s not to mention the giant tortoises hanging out in the pond, the sea turtles floating around in pairs or the hammerhead sharks elegantly lurking next to your boat.

Oh, let me not forget about the boobies – both blue-footed and red-footed and of the Nazca variety too. Black tip sharks, marine iguanas, pelicans, spotted rays…frigate birds, octopus, Galapagos penguins and short-haired owls. Finally, there were yellow warblers, pink land iguanas, doves, egrets, red-billed tropicbirds, mockingbirds and I’m sure I’m forgetting some others. 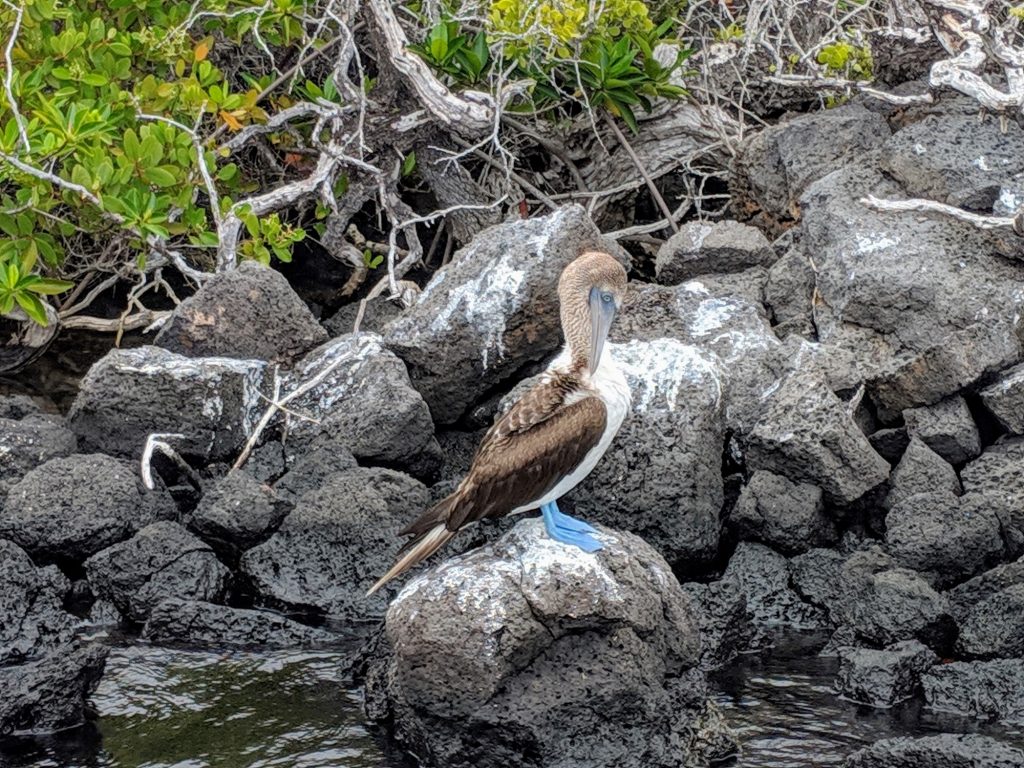 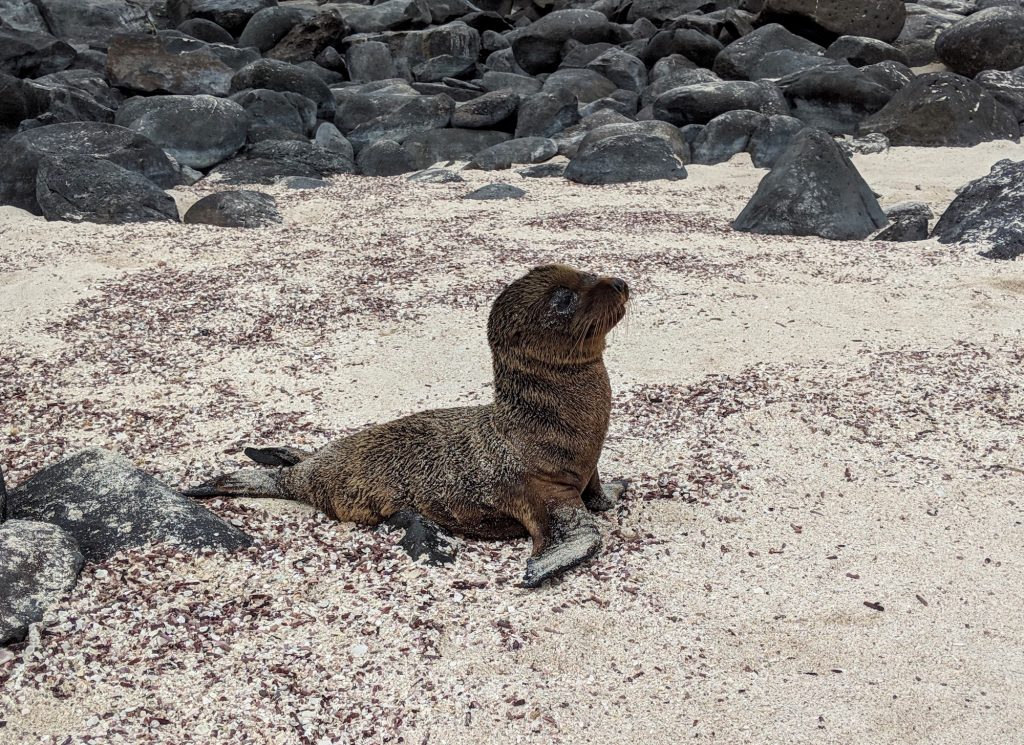 In short, there’s wildlife everywhere, to the point where I had to watch my steps for fear of stepping on an iguana, a sleeping sea lion or a Nazca booby egg. I’d be watching a turtle and easily miss the pile of 42 lava lizards on the rock next to me. I’d look at the lizards and miss the rays flapping their ‘wings’ just above the water or the baby hawk playing with the teenage frigate bird, which our guide points out is something he has never seen in 30 years.

It went on and on…there was too much to see, everywhere, all the time, on every single island.

It seems that many vessels alternate between an eastern and western itinerary and the one I embarked on was of the eastern variety. And while I have no idea what I missed out on (apparently there is a better chance of spotting whales on the western itinerary), I can’t see how anyone would be anything but impressed to the core with the eastern version.

Over the course of 8 days, we visited the islands of Santa Cruz, Genovesa, Santiago, Bartholemew and Chinaman’s Hat, Rabida, Dragon Hill, South Plaza, Santa Fe and Espanola (here’s a list of all the Galapagos Islands). We would anchor at each destination and take our small dingy boats to shore or to our kayaking or snorkeling locations. We would sail long distances at night and during the day, we sometimes stayed in one place and other times moved to a different part of a particular island. 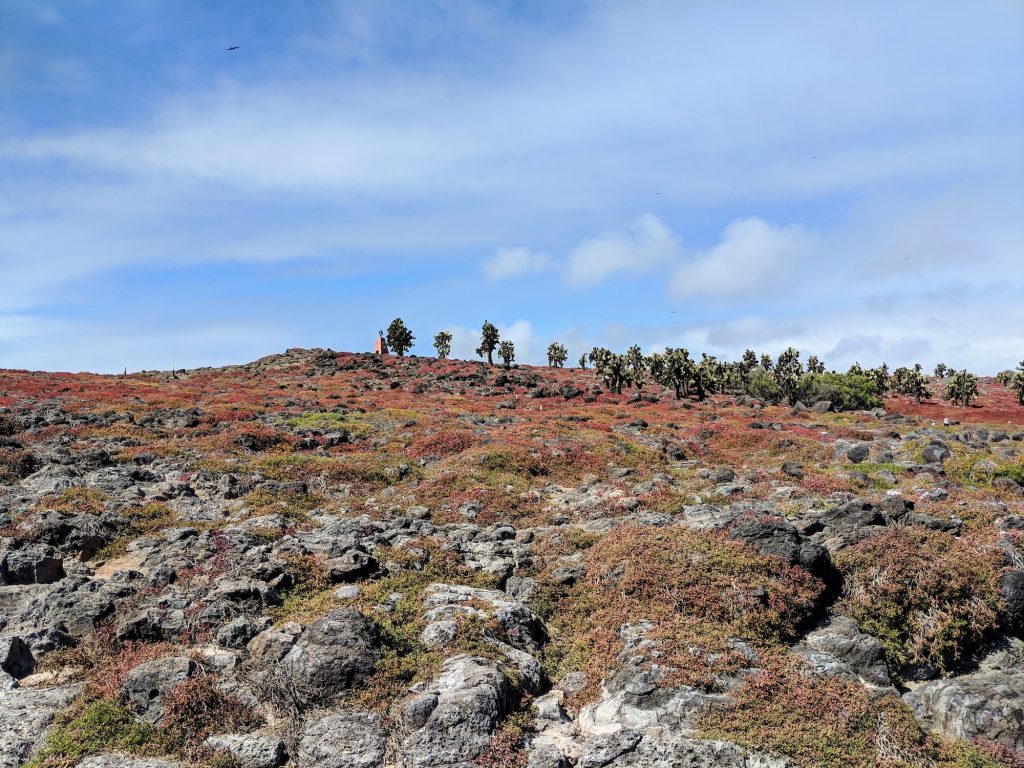 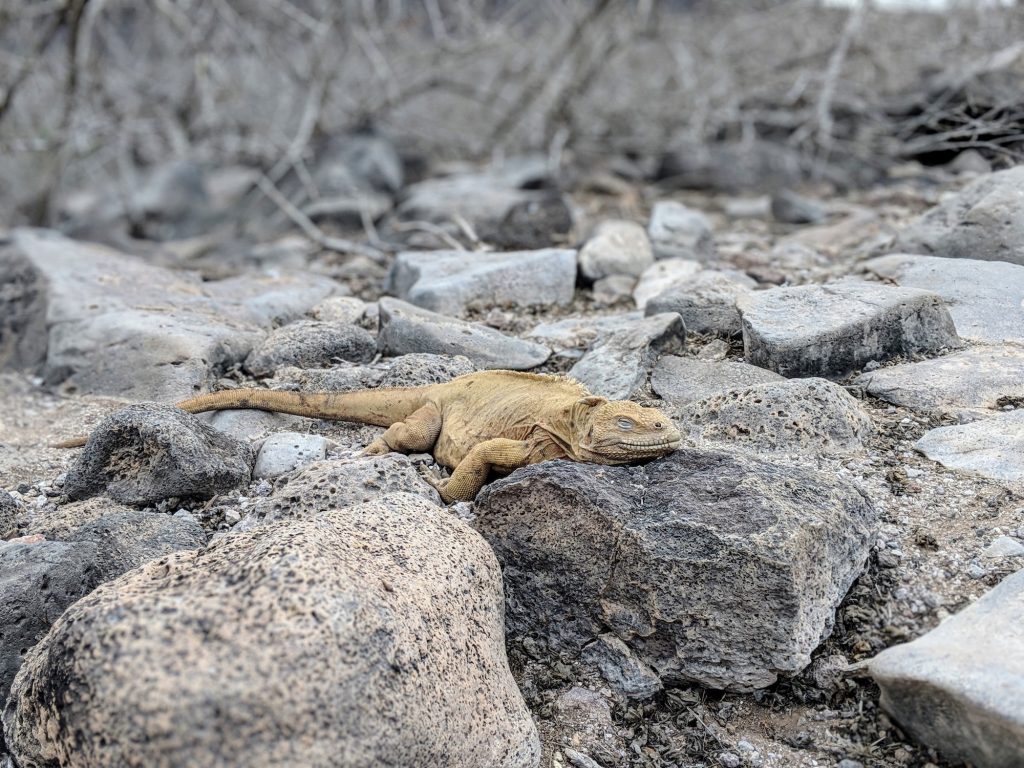 On this itinerary, we were far away from civilization. The main town in the Galapagos is the 15,000 person community of Puerto Ayora and we spent one day there in the middle of the trip. Apart from that, we didn’t visit the two other islands that have permanent communities on them. Instead, we only visited islands that had no human settlements (and no internet!) and no more than a couple of other boats in each place we anchored.

It was paradise, pure wonder and so very otherworldly at all times.

Our sailing vessel, the the irresistible S/S Mary Anne, held 14 people in cozy cabins, with a classic charm and a laid-back atmosphere that none of those luxury yachts we passed could possibly match. Having once been a racing boat in Germany some twenty years ago, the 66-meter Mary Anne, with her 3 masts, seemed right at home in the Galapagos Islands.

As the only Galapagos trip that can be undertaken by wind power alone, this sailing vessel certainly stood out, especially when those sails were hoisted. Out of every other ship we came across, none matched the character of our dear Mary Anne. (We knew this because passengers on other boats told us they kept wanting to take photos of ours!) 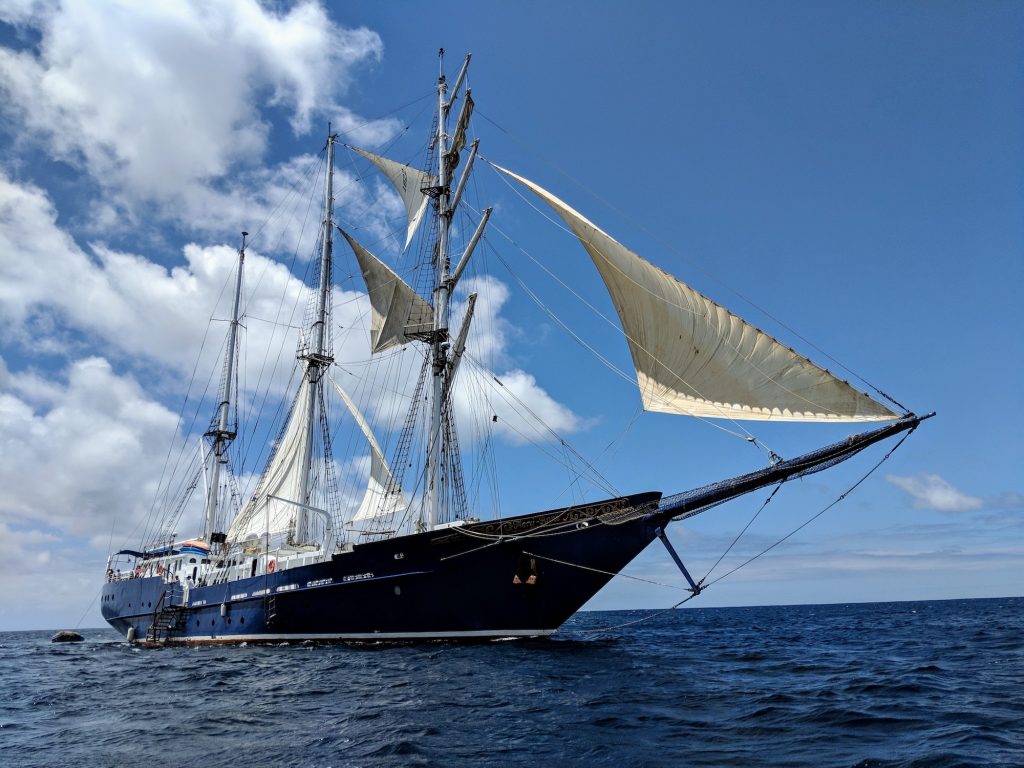 Don’t get me wrong, the entire experience was of the highest quality, with excellent food and service and attention to every detail. But our group, in fact, any group that heads up the steps of this ship, consists of real travelers eager to discover each island, eager to put on our shoes and head for the trail or hop into our kayaks for a good adventure or put on our snorkeling gear and jump straight into the cool ocean to see what the next underwater world will reveal.

And that atmosphere is why I would recommend the proud Mary Anne to anyone looking for a unique way to experience this mind-blowing destination.

That’s how breathtaking these islands are when seen first hand. That’s how much awe is created upon every sea lion sighting, every bird sighting and every shark and pufferfish and angelfish and stingray sighting. The same goes for every sighting of a bizarre-looking plant or tree or natural formation or volcano or picture-perfect white or red sand beach.

I like animals. But I never could have imagined that I would want to follow the flight of herons and frigates or stare at at a red-footed booby for an hour straight. If you told me that 1000 sea lions would be fascinating, I would have told you that by the 10th sea lion I would be bored. How wrong that would be. Show me 2000 sea lions during one Galapagos trip and I’ll happily observe them all! 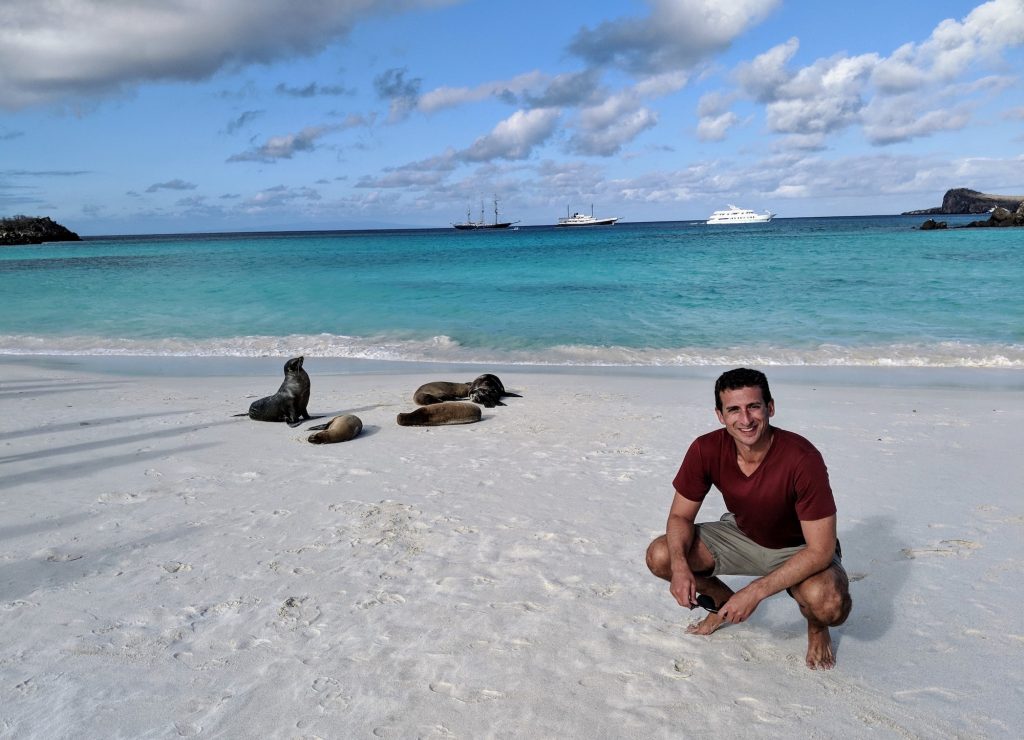 When I was out there snorkeling off of South Plaza Island and I broke away from my group, a large male sea lion suddenly appeared. He looked me in the eye and then swam only one meter in front of me. I turned around and swam after him. He twisted underwater and so I twisted too. We swam with each other for a good 2 minutes, playing around in a most acrobatic routine. And while his acrobatics were no doubt far superior to mine, he seemed to take delight in my attempt to synchronize. For me, it was pure joy.

When I swam around a large school of angelfish, I found myself only one meter away from a two meter long white tip shark. And while they are not known as a danger to humans, its long body and serious face certainly caused me to hold my breath and pause. But then, after that quick pause of fright, I happily turned and swam after him, following right behind for quite some time (until he swam into a dark cave and then I thought it was a good idea to turn around!).

When a baby sea lion popped out of the bushes and ran after a red and black land iguana, I pulled my head back in shock as the sea lion bit onto the iguana’s tail. The iguana pulled away and ran over a rock but the sea lion followed and grabbed its tail once again. They were simply playing together, as the crabs and birds and lava lizards all looked on.

There were endless moments of amazement. 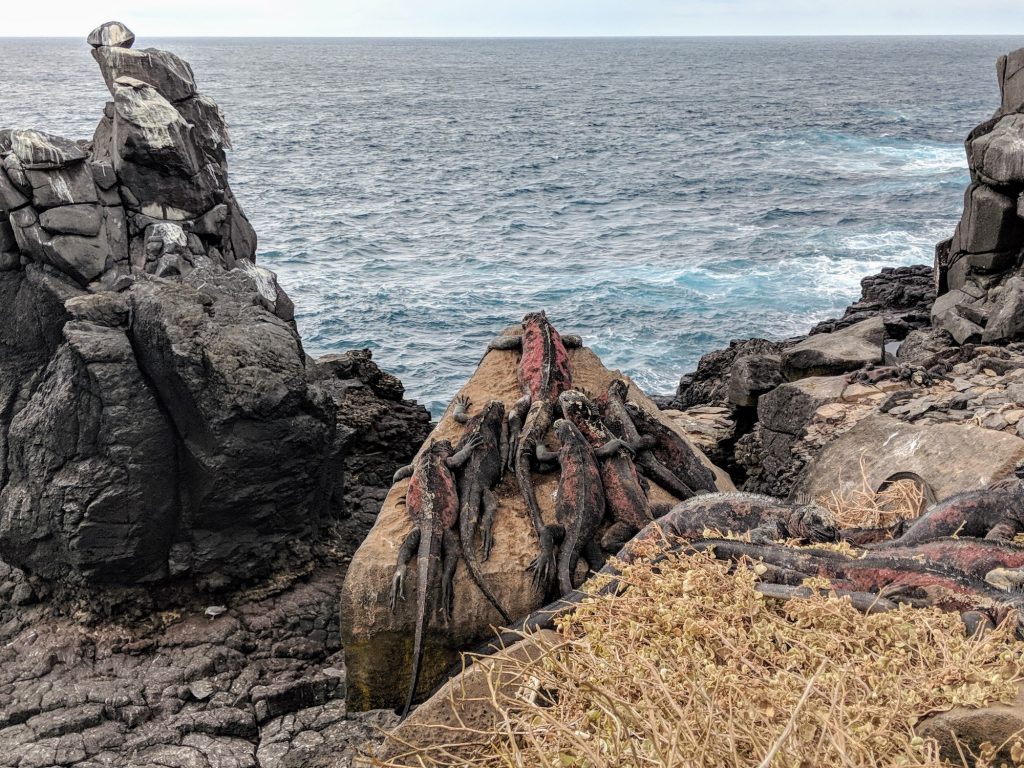 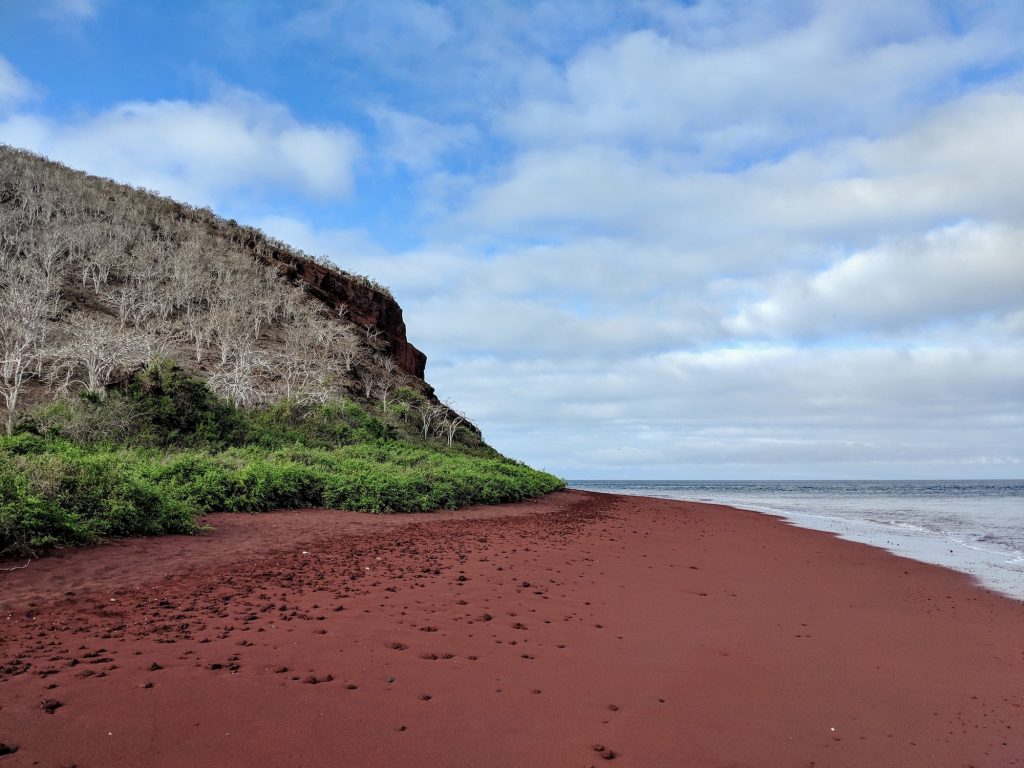 There were endless lessons to be learned as well.

Our guide, Fernando, was incredible, putting his 30 years of vast Galapagos and conservation knowledge to use as he explained, in fascinating fashion, every detail about every ecosystem, every bird, reptile and mammal, every plant, flower and tree, every volcano crater, lagoon and beach, every conservation program and research effort.

These islands reveal far more than what you could possibly read in a book.

From the various new species of iguanas that were created over a 10,000 year period to the learned behavior of the finches to the special role of cacti, we learned so many intricate details about how these islands came to be, how these animals came to be and how it all has and will continue to change due to both natural and human factors.

That education is something I won’t forget.

And it’s why I’m smiling so widely right now thinking about the stunning red sands of Rabida Island and the wacky albatross dances on Espaniola, the thousands of boobies building nests on Genovesa, the hammerhead sharks in Black Turtle Cove and the snorkeling off of South Plaza Island where we encountered hundreds of types of marine life.

I’ve been traveling nonstop for over 19 years now and I can state, without hesitation, that this was without a doubt a trip of a lifetime in every single way.

And that’s why, outside the Baltra Airport on that final day, I didn’t want to leave. This Galapagos trip couldn’t possibly be over. Or at the very least, I wanted to spot one last sea lion or lava lizard before I took off.

Well, I didn’t see either. However, moments before boarding the flight back to Guayaquil, a tiny Darwin’s finch flew through a window and right into the gate area. And you know what, that sendoff was more than perfect for me.

Please go to the Galapagos if you can.

Have you been to the Galapagos? Any questions about my trip?

Previous posts: How I Booked 13 Flights Around the World for $2200 and Let’s Talk About Tourist Crowds