It’s quite easy traveling without a guidebook. After all, within minutes of publishing my first post from Istanbul, I received both comments and emails from readers offering me tips on what I should do, where I should go and most importantly, where and what I should eat during my stay.

Seriously, why do I need a guidebook when I receive such specific instructions as these:

“Hi Earl— hop on a boat from Eminönü to Kadiköy on the Asian side, get off the ferry and cross the street, walk around the building that is directly across from the docks, then cross the street— the whole time, keeping your back to the docks. Turn right and take your first left (should be by the big bookstore with a picture of Victor Hugo on it).

Walk straight up the hill to the second main pedestrian only street. Along this street you will find a row of restaurants, three of which are called Çiya. Go to the Çiya on the corner (that isn’t called Çiya Kebap) and sit down for the most delicious experience in Anatolian cuisine.”

After reading those lines over and over again, written by Samantha in the comments of a post from last week, I decided that I needed to follow her advice. And so a few days ago I went on my own culinary tour of this grand city.

It all began while waiting to catch the ferry from Eminonu on the European side of Istanbul over to Kadikoy on the Asian side, when I naturally became a little hungry thinking about the day ahead. And so I forked over 70 kuruş (50 cents) for a piece of simit, a light bread covered in sesame seeds and sold by street vendors, and 1 TL (70 cents) for a glass of freshly squeezed orange juice. I must say that despite the rain that started to pour down, the day was off to a most excellent start…

The 20 minute ferry ride across the Bosphorus was pleasant, although the heavy cloud cover kept me from seeing much until we actually pulled into the pier in Kadikoy. And as soon as I walked off the ferry, I opened up my notebook and began following the walking instructions exactly as Samantha had written them…so I thought. It turns out that I didn’t follow the instructions very well and after wandering around for an hour (which I quite enjoyed), I finally decided to seek out some help.

It took a few attempts of asking for directions, but eventually I found the small cafe-dotted hill I was searching for and started walking up and down each of the pedestrian-only lanes until I found my place.

How can I describe this restaurant? Well, apart from standing on a rooftop and yelling “AMAZING!” at the top of my lungs, I’ll just say that Samantha was right when she ended her directions with…

“Seriously, do not miss the opportunity to eat at Ciya!”

I’m quite happy that I didn’t miss such an opportunity as the food I ate at this place was not only some of the best Turkish food I’ve eaten in the past 10 days, but some of the best food period that I’ve ever eaten in my life. Yes, it was that good.

Everything from the Ezo Gelin Soup (red lentils, mint, garlic, onion and spices) to the Babaganush (mashed roasted eggplant, tomato, garlic, pepper, topped with chicken and a butter and red pepper sauce) was simply divine.

Every mouthful was so full of flavor that I found myself eating ever so slowly, not wanting this meal to end. Eventually, however, I did force myself to eat that last spoonful of soup and the last forkful of eggplant, which left me feeling so satisfied, yet so disappointed that there was no more left to eat. 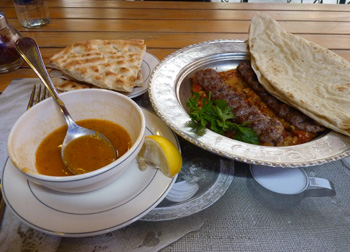 After sipping my after-meal tea and waiting for the rain to let up, I decided that since I enjoyed Samantha’s first recommendation so much, I better try out her second one as well. Off I went once again through the streets of Kadikoy, trying to find my way back to the ferry pier.

On a side note, it was hard to pin point exactly, but something about the Asian side really appealed to me. It seemed laid-back but lively, a bit rougher around the edges but friendlier at the same time. Perhaps it was again the fact that I did not see a single other tourist during my time in Kadikoy, an observation that, oddly enough, seems to put me even more at ease than usual. All I know is that I loved the atmosphere of Kadikoy and wish I had been able to spend more time over there.

Anyway, enough of that…despite my strong fondness for the Asian side, I was still more than happy to get on the next ferry back to the European side. After all, if I could manage to follow Samantha’s next set of detailed directions, I would soon be enjoying what she described as “some of the best baklava in the city.” 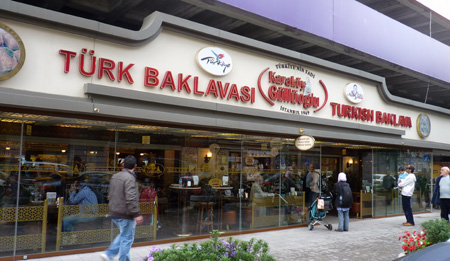 I’ll just come out and say it. Yes. It was the best I’ve ever eaten. Simple as that.

And as a result, I went a bit overboard. After trying one piece I got a little too excited and proceeded to have the man behind the counter fill up a box with 2 pieces of just about every type of baklava they had for sale. 600 grams and 18 TL ($12 USD) later, I walked out of Gulluoglu with my box of goodies, ready to head back to my room and enjoy these treats in private.

The first piece I ate upon returning to my room was the chocolate baklava and while it certainly looked a bit unfortunate, its taste was nothing short of sweet perfection!

In fact, every single piece of baklava I ate proved to be that tasty. As the sugary syrup ended up all over my hands and face, I would just close my eyes and meditate upon the bursting flavors that brought each bite to life.

Out of the 21 pieces of baklava I bought, I ended up eating 12 of them in about 30 minutes, after which time I decided it would be a wise idea to give away as many of the remaining pieces as possible. I have a feeling that if I continued to eat the baklava by myself, I wouldn’t have been able to get out of bed the following morning.

I already paid a price for the 12 pieces I did eat as I wasn’t feeling too well for about 36 hours afterward. Apart from an expected stomach issue, I also felt as if the blood in my body was just oozing around, too thick from all the syrup and honey to properly flow to where it needed to go.

THE FINAL STOP ON THE TOUR

Somehow, even after all of that baklava, my tour was not yet finished as I found myself quite hungry at around 10pm that night. And so I went for a 20 minute walk in search of dinner and ended up capping off this splendid day of stuffing my face with some of the best food Istanbul has to offer, with a simple, but delicious tavuk doner durum (chicken pita) from a tiny kebab shop I came across. Then, before heading back to my room, I stopped by another orange juice vendor for one last glass of that healthy, freshly squeezed goodness in an attempt to flush out some of the baklavian toxins that I could feel circulating throughout my body.

I’m not sure if it worked, but I did manage to make it all the way to my bed without falling into a binge eating-induced coma, something that I’ll admit I was a bit concerned about at the time. Instead, stuffed and happy, I fell asleep wondering where I would eat the following day in order to continue my culinary tour of Istanbul.