Flying Across the Atlantic With Condor Airlines

Flying Across the Atlantic With Condor Airlines 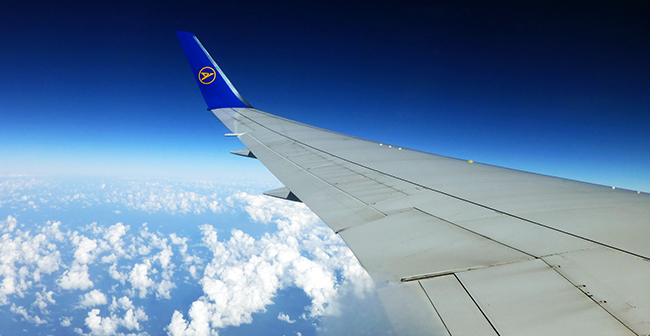 Despite having promised myself dozens of times over the years to never book a flight, bus or train that required me to set my alarm for anything earlier than 6:00am (early morning is not my favorite time of day), I continue to fail miserably at this simple task.

So last night I tried to do something different before my early morning flight out of Bucharest. I didn’t sleep at all, instead choosing to remain awake until 3:45am, drinking glass after glass of vin fiert (boiled wine with pepper, orange slices and cinnamon) with my friends while talking about such topics as gall bladder cleanses, sales techniques and peacocks.

And then I showered, finished packing and hopped into a taxi at 4:30am, making my way to the Otopeni International Airport. Eighteen hours later, I arrived in Fort Lauderdale, Florida, feeling remarkably well-rested and energetic.

I remember almost nothing of the first leg of my journey, Lufthansa Flight 1423 from Bucharest to Frankfurt, Germany. I guess I boarded the plane at around 6:00am and I do recall exchanging a quick ‘Guten Morgen’ with the flight attendant who was greeting the passengers at the entrance to the aircraft. But after that, all I know is that I woke up when the plane hit the runaway in Frankfurt. In between, I can only assume that I did what I normally do while in such a deep sleep, which is drool all over the place. Neither my shirt nor chin were wet when I awoke but I had been asleep for so long that they probably had enough time to dry.

Still exhausted, I stumbled around the Frankfurt Airport for a couple of hours, quite surprised to find a severe lack of eating options, a mere 30 minutes of available free WiFi and terminal buildings with almost no seating at all. My hope of sitting down at a cafe and getting some work done for a couple of hours remained a mere hope as I was forced, instead, to buy a crappy sandwich and eat it while leaning up against a wall. (This airport was quite a disappointment for an airport that is Europe’s third busiest.)

As a result, I couldn’t wait for my ten and a half hour flight to Fort Lauderdale to begin, which is saying something considering that my flight was with Condor Airlines, an airline that does not suffer from a shortage of negative reviews online.

Eventually, I passed through the security check near the gate after giving a demonstration of how my XShot camera extender works to a security officer (he must have thought it looked like a small, yet dangerous, piece of weaponry). And after a short bus ride to the aircraft, which was parked away from the terminal building, I stepped foot onto the Boeing 767-300 that would take me across the Atlantic Ocean.

I then promptly sat down in my window seat, 31A, next to a friendly German guy, and of course, after we exchanged quick greetings, I immediately fell asleep once again.

However, when I awoke from this second nap of the day, I was a bit upset to learn that only one hour of the ten and a half hour flying time had passed, but at least there was a hot lunch sitting on my tray table, a lunch that looked far more impressive than I was expecting given those not-so-positive reviews I had read.

And yes, the lunch was quite decent and in comparison to most other airlines, it was actually well above average. (In fact, when compared to US-based airlines, this was an amazing meal!) Once the lunch ended, the many screens inside the plane began showing a movie (it was quite fitting that the first film was “The Best Exotic Marigold Hotel” since I’ll be in India next week), drinks were served, reading material was handed out and I was having a grand ol’ time on board.

Sure, the seats were a tad smaller than on other airlines but I can’t say it was uncomfortable at all. The staff on board were extremely friendly and helpful, snacks and two full meals were served during the flight, passengers could help themselves to drinks (non-alcoholic) at any time, the blankets were warm and the pillows comfy.

Apart from the time I was walking down the aisle to the bathroom in order to brush my teeth and ended up stepping on the bare foot of a man who was sound asleep in his seat, I’d say this flight was a complete success.

And I even got to fly over Happy Valley-Goose Bay, Canada for probably the twentieth time in my life (maybe I should visit this destination in person one of these days as I have a feeling it would be quite a ‘middle of nowhere‘ kind of place) and right over my home city of Boston as well, which is, at about 32,000 feet (9700 meters), about the closest I’ve come to actually being back there in about four years or so.

So that’s how it was to fly with Condor Airlines, an airline that is part of the Thomas Cook Group, and an airline that offers some intriguing long-distance routes around the world at fares that range from competitive to very cheap ($300 one way from Frankfurt to Fort Lauderdale). I certainly don’t have a single thing to complain about from this journey and I have no doubt I’ll be flying with them again at some point.

For now, I shall spend the next twelve days visiting family and friends here in the US before crossing the Atlantic Ocean one more time next Thursday, this time with Air India, on a direct flight from New York City to New Delhi.

Have you ever flown with Condor Airlines? Any other good airlines out there that many people don’t know about?