Exhausted But Not Ready To Sleep

Exhausted But Not Ready To Sleep 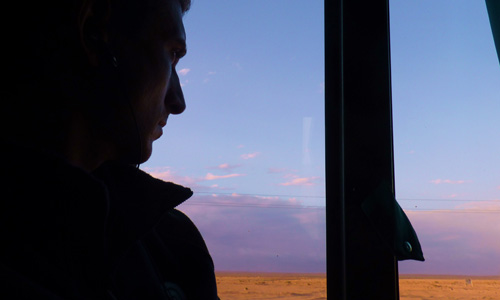 As I stumbled onto the bus, all I could think about was finding my seat and passing out. I had reached that point of exhaustion where my brain was able to do little more than perform it’s most basic functions and and even an attempt to speak resulted in a jumbled collection of incomprehensible caveman sounds.

The time was only 3:00pm but the day had already been quite full of activity. From the moment I woke up at 7:00am, I had spent much of my time climbing around castles, with the time in between spent sitting in a vehicle that meandered through curvy, sleep-inducing mountain roads. The problem was that every time I fell asleep, we arrived at our next destination and it was time to explore once again.

I’m not complaining. My time spent climbing all over the spectacular ruins of Misyaf Castle, a medieval structure rising high above a small Syrian village dominated by fig and pomegranate orchards, was time well spent. Apparently, Misyaf Castle is not listed in many guidebooks and to be honest, even though this site is definitely guidebook-worthy, I hope it continues to be left out of future editions. Having an entire castle all to myself is not something that happens often in life.

The other highlight of the day involved my return to Krak de Chevaliers, the castle where a small group of us had been chased around a week earlier by a security guard who tried to close the castle while we tried to enjoy a few extra minutes inside. This time, I had a full 3 hours at Krak and as one might imagine, this second visit was even better than the first.

After Krak de Chevaliers, I traveled straight to the town of Homs, where I bought a bus ticket for the two and a half hour trip to the desert oasis of Palmyra.

And as soon as I boarded that bus, the exhaustion took over. I found seat #31 and plopped myself down, preparing for what I imagined would be a blissful two and a half hours of deep, deep rest and relaxation. Waiting until the bus pulled out of town, where it began it’s journey along a quiet desert road, I finally took one last glance out the window before closing my eyes.

NO SLEEP TILL PALMYRA

I didn’t sleep at all on this trip. In the end, my eyes refused to remain shut despite my overwhelming exhaustion. I tried to recline my seat. I tried to lie down across two seats and stretch my legs into the aisle. But nothing worked and after each attempt I found myself staring out the window at the desert landscape once again.

Why couldn’t I sleep?

The reason is simple. I was in Syria. I was rolling through the Syrian Desert and there was no way my mind would allow me to miss a moment of it. Everything my eyes fell upon forced me to try and make sense of the unfamiliar world outside. Whether it was the infinite stretches of sand, the beautiful rock formations in the distance, the isolated mud hut villages and Bedouin encampments, the herds of sheep or the odd person walking alone across the desert with no starting point or destination in sight, I needed to catch a glimpse of it all.

When we travel, even what at first appears to be just a barren landscape, will reveal to us all sorts of questions, answers, challenges and lessons if our eyes are open wide enough. And on this bus journey, which could have easily been through the Bangladeshi countryside, the Australian outback or the heart of Nicaragua, as much as I wanted to sleep, my brain was smart enough to refuse me this wish. As a result, I observed a part of Syria that I would have otherwise missed and upon leaving the region, would have still never even known existed.

The desert, as it so often does, proved to be full of life beneath it’s surface. Children played outside, shepherds led their herds to water, small army outposts consisting of a handful of soldiers living in tents appeared in the most improbable of locations. I was also left scratching my head each time I noticed another barely visible dirt road that stretched far into the unknown without any sign of civilization in any direction at all.

And by the time the sun began to set behind the hills and sand dunes, creating that purple, all-encompassing glow that only the desert seems to know, I was wide awake, ever so thankful that I didn’t miss a single minute of this seemingly uninteresting bus trip.

How do you view the world when traveling? Do you try to observe as much as possible and not miss out on anything?