Everybody Needs Some Stuff – A Few Gift Ideas

Everybody Needs Some Stuff – A Few Gift Ideas 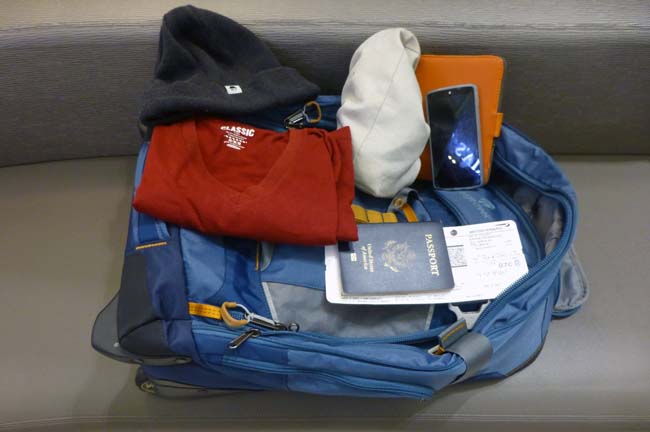 Everyone needs some stuff. You don’t need a lot of stuff, but it would be quite difficult to go through life without any stuff at all. And while my goal is still to travel with under 10kg of stuff as often as I possibly can, that still means I own at least 10kg worth of stuff.

George Carlin said that “A house is just a place to keep your stuff while you go out and get more stuff.” Luckily, I don’t think that applies to those who live out of a backpack.

During 2013, I continued using some stuff that I have been using for a long time and I’ve also discovered some more stuff that has made my life a little easier or more enjoyable. Again, it’s not a lot of stuff that I own, but it’s some stuff.

And since the holiday season is now here, right here in fact, I figured I would share a quick list of some of that stuff just in case you need any gift ideas for someone you know who likes to travel, which might even be yourself. Certainly we should give ourselves gifts from time to time, right?

I just bought myself a gift here at the Los Angeles International Airport. It was a burrito, one last taste of Tex-Mex food before I board my flight to Romania in a couple of hours. And since it was a special ‘end of the year’ gift, I even paid $1.79 extra for guacamole. Actually, that’s complete nonsense. Well, I am at the airport about to board my flight to Romania and I did just eat a burrito with guacamole, but the new phone below was the real ‘end of the year’ gift for myself. The burrito was just something I couldn’t stop myself from buying. It’s tough being a burrito addict.

XShot Camera Extender – I’ve mentioned this brilliant camera tool quite often over the past year and I’m still using my Pocket XShot all the time. And with their new XShot Pro version that’s coming out, which is even sturdier, I’m excited to give it a try and continue taking unique photos (such as these photos from my travels) that wouldn’t be possible to take without it.

Eagle Creek Load Warrior Wheeled Duffel 22 – Here’s the thing…I realized recently that sometimes I need a different type of luggage instead of a backpack for those shorter trips where I don’t really have a need to carry my things on my back. And as I was thinking about that, I was contacted by Eagle Creek, and they offered to send me one of their suitcases to use. So I chose the Load Warrior Wheeled Duffel 22 and it’s turned out to be quite a neat little piece of luggage. It’s lightweight, it can be taken as a carry-on, it has 45 liters of space and it has just the right amount of compartments, at least for me. I’ve used it over the past three weeks here in the US and it’s been quite an excellent travel companion I must say. It’s nothing flashy but it’s practical and that’s exactly what I need. (*I accepted the Eagle Creek luggage on the condition that I would give it an honest review. I would never accept anything if a positive review was either required or expected.)

Panasonic Lumix ZS20 – I haven’t changed my stance on this one. In my opinion, the Lumix ZS20 is a perfect travel camera for those who don’t take photography too seriously. Excellent photos, solid video, small size, 20x zoom, ridiculously low price for what you get…not a bad combination. There’s the newer Lumix ZS30 as well that also gets excellent reviews.

Telecomsquare Mobile Wifi Router – Yes, it is a bit pricey to carry around one of these devices (about $13 USD per day), however, if you are going on a shorter trip and need to make sure you have access to the internet at all times, this tiny mobile Wifi router from Telecomsquare is an ideal device. I’ve now used it in several countries, including twice in India, and it’s worked in every city and town that I’ve visited, as well as in the middle of nowhere. This has allowed me to work at any time and in any location without worrying about finding a reliable Wifi signal.

Macbook Pro w/ Retina Display – Yes, as I mentioned earlier this year, I made the switch from a Windows laptop to a Macbook Pro. The post I wrote about the change turned out to be one of the most controversial posts I’ve ever written, with readers weighing in with all kinds of thoughts. While it might not be for everyone (and I understand every reason why people argue against buying one), I personally love my Macbook Pro as I get a lot more work done on this machine and I enjoy doing that work a whole lot more as well. And to me, that makes it worth every dollar I spent on it.

Google Nexus 5 Smartphone – My older Nexus S phone died about a month ago and so I picked up a new Nexus 5 from the Google Play store. It’s a fun phone to use, it’s an ideal size for me and its features are very impressive, with incredibly accurate results. And at $349 for an unlocked 16 GB version, it’s an excellent value.

Crocs Modi Flip Sandals – I still love my Crocs, more specifically, the Modi Flip Flop. Super lightweight, comfortable and durable, it doesn’t get any better than that for someone who wears sandals often while traveling all the time.

And how about some book stuff…these are my four favorite reads from the past year:

The Pirates of Somalia by Jay Bahadur

Incognito: The Secret Lives of the Brain by David Eagleman

Predictably Irrational: The Hidden Forces That Shape Our Decisions by Dan Ariely

Have a wonderful, and safe, end to 2013! And as always, I truly appreciate you following along with this blog during the past year, whether it was for the whole year, a few months or even if this is the first time you’ve ever visited. I am already looking forward to more interaction with all of you next year!

(I’ll be back after New Year’s, ready to announce the dates and destinations for a few more Wandering Earl Tours.)

And I’m curious, where are you spending the final week of 2013?