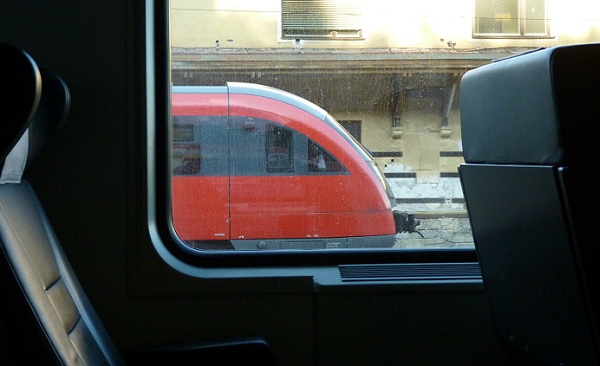 The second leg of my train trip around Europe involved a somewhat shorter, and no less comfortable, international journey than the first leg. Starting off at Vienna’s Meidling station, I found myself on a Maribor-bound train sitting in a near-empty compartment, something that came as quite a relief.

The day before, when I had visited the ticket office at the train station to reserve my space, I was informed that, with my Eurail Pass, all I needed to do was show up. Apparently, I did not need to book an actual seat ahead of time.

While this information did come straight from the ticket office itself, I was still a little weary as I had been required to book a seat for my earlier train trip from Lucerne to Vienna. Well, of course the ticket office was correct and I had dozens of empty seats to choose from. And when the ticket collector came around, all he did was stamp my Eurail Pass, allowing me to sit back and relax.

Unfortunately, however, I was able to relax so much that, maybe thirty minutes after leaving the station, I fell into a deep sleep, only to wake up some two hours later. And when I did awake, the train was already in Slovenia and about to arrive in the town of Maribor, where I would be required to change trains.

Changing trains seemed like it would be quite easy, right up until I glanced at the official clock at the Maribor train station. Our train from Vienna was arriving six minutes late, and while that may not seem like much, I only had five minutes to catch my second train. But alas, the Slovenian train system is quite organized and, knowing that our train was about to arrive, they kindly waited for us transferring passengers, of which there were maybe twenty.

The second and final stage, from Maribor to the Slovenian capital of Ljubljana, took a mere one hour and forty-five minutes. The train car I ended up sitting in was naturally as empty as all the previous ones and as comfortable as well, despite the fact that, from the outside, the Slovenian train appeared somewhat shabbier than the Austrian trains.

And while the Slovenian scenery also differed greatly from that of it’s neighbor to the north, I was unable to really pinpoint the differences through my exhaustion-induced haziness. But by simply glancing at the architecture, and even the people that I observed in the streets and gardens of the towns we passed, I definitely sensed that I was now in Southeastern Europe, a part of the world I had never been to before.

While this is my own adventure and my posts are always my own words based upon my own personal experiences, I must make a note that Eurail.com has provided my Eurail Pass as part of their Blogger Project for 2011.