As if walking twenty minutes across Ljubljana (basically from one end of the city to the other) at 7:30am, in temperatures that refused to rise above freezing, and with my backpack strapped to my back, wasn’t tough enough considering my strong dislike for waking up early, you can imagine how I felt when I soon found myself standing on Platform 6 at the Ljubljana train station, waiting for a train that simply was not arriving.

The official departure time had been 8:15am, but as 8:15am rolled around, as well as 8:30am and 8:45am, no train had appeared. And there I stood just staring at the ground, along with fifty other people whose bodies were frozen solid and who all appeared to be in the same state of indescribably horrific pain as a result of the strong wind blowing in our faces. All I could do was wonder how rare it must be for a train originating in such an efficient country as Austria (the train was coming from Innsbruck) to be so late. 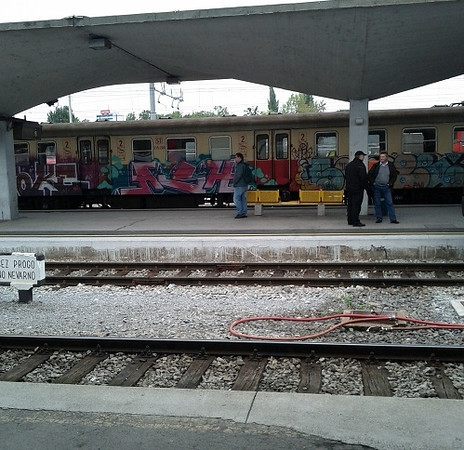 It was not until 9:20am that the train slowly pulled alongside the platform, at which time all fifty of us passengers jumped on board in a massive rush.

This was a small train of only five cars and so I simply opened the sliding door to the first compartment I came across that had an empty seat. Five minutes later the train began to move towards Zagreb, Croatia and I smiled at my fellow passengers in the compartment, which included an elderly Slovenian man and two young Slovenian women.

My friends, I must tell you how lucky I was to have chosen this compartment. For the next two and a half hours I would end up not only chatting with two lovely Slovenian women, but receiving a most thorough and eye-opening education about….the natural beauty and cosmetic product company known as “Lush”, which I’m sure many of you have heard of.

Yes, yes, yes. It turns out that these two women were both store managers of Lush locations in Slovenia and they were on their way to their annual, week-long company meeting/social get together that was taking place in Belgrade, Serbia.

And so, after introducing ourselves and getting to know each others brief personal story, I proceeded to sit in that train compartment in a state of complete fascination as I discovered an entirely new world, a world that consists of Fairy Jasmine Bath Bombs, Sex Bombs, Shimmy Shimmy Massage Bars and even Pow-Wow Lip Scrub, which is made from Pop Rocks candy and is meant to be licked off by one’s kissing partner. (No, they did not have any Pow-Wow with them for me to sample.)

In order to hold my attention as much as possible, these two women would often take a break from talking about sensual lotions and shower gels, and they would point out the window, giving me a basic, but interesting, description of the towns and villages we passed. Of particular note was the wine region of the Lower Sava Valley, a region I wished I had visited during my stay but which I will certainly reach the next time I’m in Slovenia.

As you might imagine, this constant conversation made the trip from Ljubljana to Zagreb pass quite quickly. And I must say that, overall, this certainly was another fantastic European train journey. The train car itself was surprisingly warm, the immigration procedures entering Croatia were super-easy as the officers board the train and check your passport without you ever leaving your seat and the combination of inspiring Southeastern European scenery and friendly fellow passengers once again reminded me why I enjoy traveling so much.

However, it must be said that by the time I arrived in Zagreb and had to say my goodbyes to the two Lush store managers, all I could really think about was finding a Lush shop in Croatia. I desperately wanted to purchase one of their Irresistible Bliss Solid Shampoo Bars (that supposedly lasts for 80 uses – can you imagine!) and, well, quite possibly a You Snap The Whip Body Butter, just in case I meet a special someone while on this trip.

While this is my own adventure and my posts are always my own words based upon my own personal experiences, I must make a note that Eurail.com has provided my Eurail Pass as part of their Blogger Project for 2011.