The Day I Saw a Headless Man in India (How Would You React?)

The Day I Saw a Headless Man in India (How Would You React?) 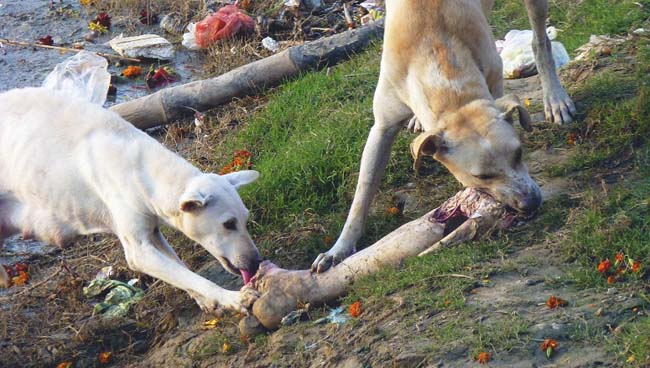 There I was, sitting on a metal chair inside of the ‘Upper Class Waiting Room’ at the train station in the Indian city of Gwalior. My Wander Across India tour group and I had about an hour before our train to Varanasi would depart and I was perfectly content to just sit there and stare at the walls to pass the time. I stare at the walls, lost in thought, quite often during my visits to India, most likely because this country constantly feeds me experiences that require an abnormally long time to process.

At one point during that hour-long wait, I needed to use the bathroom, and so I walked out of the waiting room and onto the platform. I turned left and started walking towards a sign that had a picture of a urinal on it. As I walked towards that sign, I remember looking around at some of the people I was passing. The platform was quite crowded, as many Indian train station platforms tend to be, but I distinctly recall seeing one man to my right who was resting with his head on his duffel bag, and a few feet further along, another man dressed in all white who was sleeping soundly next to the wall on my left.

I entered the bathroom, waited in line for about two minutes for a urinal to be free, relieved myself and washed my hands. And then, with little else to do, I began to walk back towards the waiting room.

And as I walked along the platform once again, I naturally passed the man who was sound asleep moments before, dressed in all white. But as I came upon him this time around, I instantly froze, very much unable to take another step as I stood only five feet away from him. Chills ran through my body, my eyes suddenly opened wide and refused to blink and my brain clearly had no idea how it should react.

The man’s body was lying on its back, but his head had been sliced off and was propped, with eyes open, on top of his knees. There was little blood on his white clothes, and little on the platform as well, but you could tell that whatever had happened had happened quite recently as his face, apart from no longer being attached to his neck, looked fully alive. A few people slowly began to gather. Three police officers were on the scene, standing ten feet off to the side, one drinking chai, as they nonchalantly chatted to each other. A random man walked up to the head, grabbed it by the hair, lifted it up a few inches, then put it back down before walking away. A different man started laughing out loud. Another man took a photo with his phone.

And still, there I stood, the feeling of nausea growing stronger, yet with my eyes unable to turn away. I stood there for about three minutes.

Finally, as the crowd around the body became larger, I managed to pull myself from the scene and after one last glance at the head, at the eyes, at the neck that had been sliced so cleanly through, I forced myself to continue down the platform. But I must have looked back at least twenty times before I reached the entrance of the waiting room.

Needless to say, I spent the rest of the wait before our departure to Varanasi staring at the walls once again, quite disturbed. I also spent a significant portion of the night on board that Bundelkhand Express train wrapped up in a blanket in my little bed, trying to handle the image of the man’s body and head that was constantly flashing in my mind.

And with each of those flashes, I felt a sudden urge to vomit, an urge that luckily passed each time without becoming a reality. I did manage to drift off once in a while but the first thing that popped into my head as soon as I would snap out of my light sleep was always the same thing.

Even now, a few days later, the man’s face is as clear as if it was right in front of me, and I have a feeling it’s going to stay that way for a long, long time.

This is India. No, it’s not full of headless bodies. But yes, it is full of unique experiences that can have a major impact on a traveler.

India jolts me, it shakes up my brain to the point where I must constantly think about life, I must constantly re-evaluate everything I know, or think I know, about how life is supposed to work. I am forced to process sights and situations that my mind does not normally process. And as difficult as it can be to process some of these experiences, I do believe that such a jolt is healthy. It ensures that our way of thinking does not become stale and that we think about things beyond our typical daily lives every now and then.

And regardless of whether the experiences that give me such a jolt are unimaginably disturbing or unimaginably beautiful – most of the life-changing experiences I’ve had in India have indeed brought smiles to my face – all of those experiences have eventually led me to think long and hard about my own life as well, as most intense and deep experiences tend to do.

Am I living the life I truly want? Am I happy? Am I being as good of a person as I can be? Are my priorities in order?

And, with my Wander Across India tour having now come to an end last night and a quiet two-week period in Goa about to begin tomorrow, these are indeed the questions that I will spend much time contemplating in the days ahead.

Yes, it is all thanks to the image of that headless body and that body-less head right there on that train platform in Gwalior, that image that seems to have no intention of disappearing from my mind any time soon, that image that has woken my brain from another sleep. And of course, I could just try to push that image out of my head, but I think I’ll choose to dwell on it instead, to accept the challenge that such an experience presents, and ultimately, to see how I answer the above questions that now sit before me.

How would you react if you saw something similar? What are some intense experiences you’ve gone through during your travels, whether disturbing or beautiful?