Chewing Qat (aka “Getting High”) In Yemen

Chewing Qat (aka “Getting High”) In Yemen

If there’s one word that I heard more than any other during my stay in Yemen, it is the word ‘qat’. And the reason that word is so important is because, at approximately 2pm every single day, the entire nation stops everything they are doing and focuses on qat and on qat only.

Qat is a plant that is grown all over Yemen, on what seems to be every square inch of land, whether in the valleys or on the mountainsides, that could be used to grow a plant. When the leaves of the plant are fresh, they are chewed, an activity that leads to a state of increased excitement with the possibility of mild euphoria as a bonus. This state is the result of a stimulant similar to amphetamine that is found in the plant and which, using the best description I’ve heard, acts as if you’re drinking endless cups of very strong coffee. Qat, and the substance it contains, is actually illegal in many countries and its use is mostly limited to Yemen, Somalia, Ethiopia, Djibouti and a handful of other countries in the same geographical area.

In Yemen, people chew qat while walking, sitting, talking, driving, working and just about anything else they might be doing. And when I say ‘people’, I am referring to what appears to be the entire over-18 male population of the country as well as many women, who also chew the leaves according to their husbands at least.

It’s quite traditional for Yemeni males to wear a jambiya every day, a curved ceremonial blade that is displayed in the front by wedging it into a thick belt. And when qat time comes around, most males suddenly have a huge bag of leaves hanging from the handle of their knife so that they have easy access to their qat.

This is not just some hobby. Every male I met admitted that they were addicted to qat and that the only way they could stop chewing it was if they had no money at all and couldn’t afford even the cheapest variety, which runs about 500 rials ($2 USD) for a huge bag.

Did I try it out? Of course I did. Not a day went by when a local person didn’t give me a gift of qat to chew and you know how it goes…when you receive a gift of qat, it’s certainly rude to refuse.

HOW DOES CHEWING QAT WORK?

Morning – Go to the Qat Market to buy your daily supply, choosing the best quality that you can afford. Qat typically stays fresh for one day so most people buy a new batch every day. 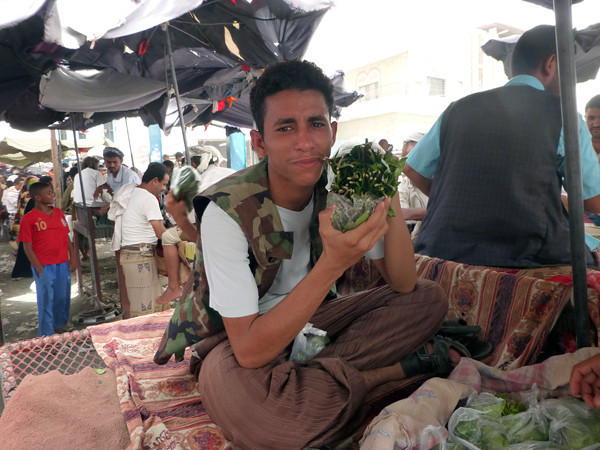 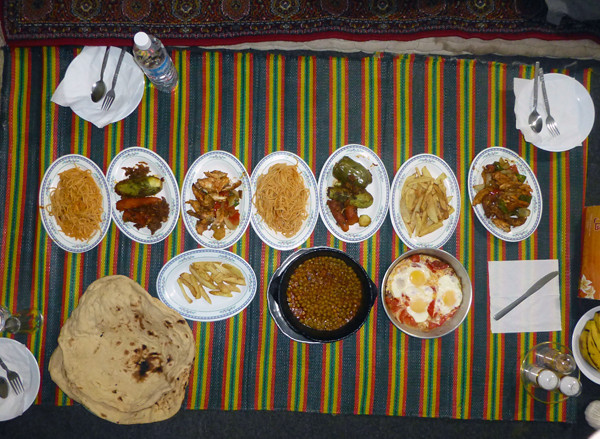 2:00pm – Pull out your bag of qat, find a comfortable mufrage (sitting room designed specifically for chewing qat that can be found in every home, restaurant and hotel and may sometimes be located outside) and get into the proper qat chewing position. See below photos for an example… 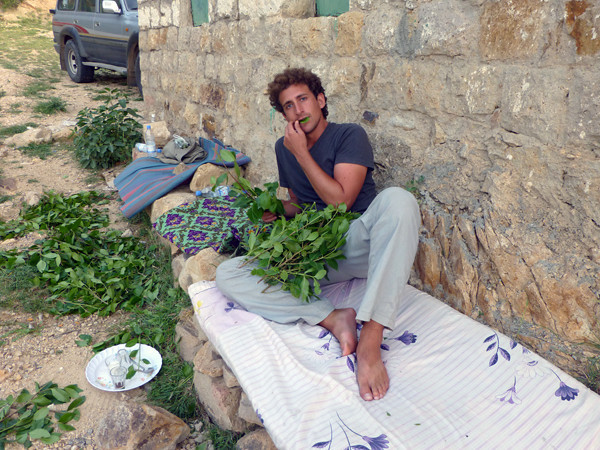 3:00pm – Keep on chewing qat, crunching up those leaves and growing that bulge. 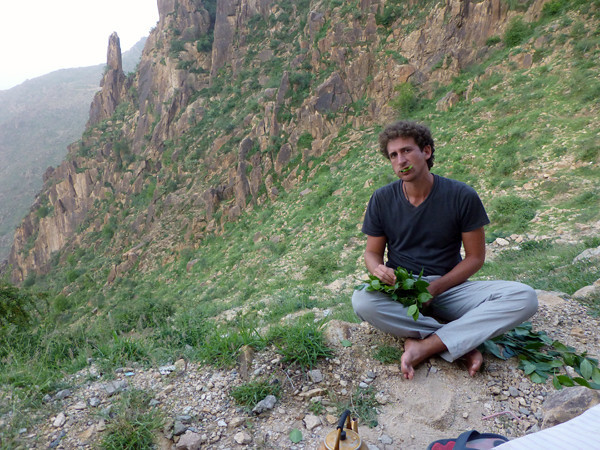 6:00pm – The weakest qat chewers will now spit their mushy ball of chewed up leaves out of their mouth while the stronger ones will continue going for many hours more. 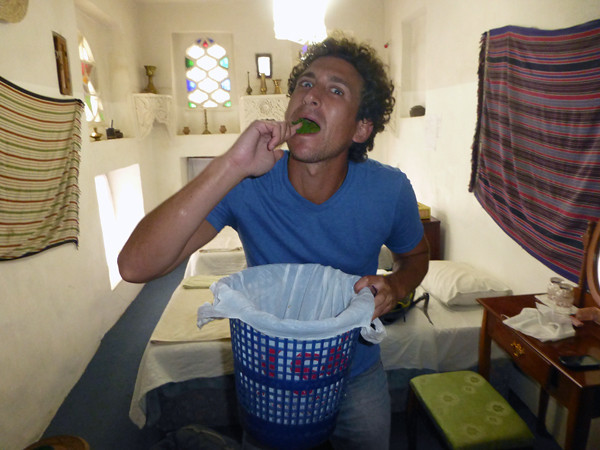 Some time in the night – The qat session finally comes to an end and you spit out the remaining qat from your mouth. You drink a cup of black tea and then you sit there on the cushioned floor of the mufrage, trying to engage in some conversation with the others around you until dinner is served or it’s time for sleep.

WHAT ARE THE EFFECTS OF QAT?

As mentioned above, qat users get a bit excited and as a result, they will often become extremely talkative and hyper, spitting out words in such a rapid and animated fashion to anyone who will listen. However, it also seemed to me that just as many users I met were perfectly content to sit in silence, staring at the wall and minding their own business.

Behind the scenes, your blood pressure and heart rate increase, you lose your appetite and to top it off, you become constipated. Long term effects may include cancer of the mouth, depression and psychosis, all fun stuff.

It was okay. Seemed like quite an effort for such a little buzz. The qat made me a bit spacey and somewhat hyper, and I had a good time as a result, but it took four hours of chewing leaves to get there. However, with a 65% unemployment rate in Yemen, I can understand the appeal. A quick high would leave most people with very little to do all afternoon and evening. Qat fills in the day.

But for me, all that chewing was a painstaking process as the inside of my mouth became sore and raw, the stuff kept me awake at night and I’m quite sure that it messed with my digestive system. And that’s after only chewing qat for one week.

Would I do it again? Sure, simply because that’s the thing to do in Yemen and in the end, it is a social activity. Had I not chewed qat I probably would not have had the same interactions and conversations with locals that I ended up having. Qat honestly helped bridge the tourist gap, allowing me to take a few more steps closer to the culture I wanted to learn about.

I could definitely have done without the constipation though.

Have you ever tried qat? Would you try it?