Cambodia: Sitting In A Puddle On A Train

Cambodia: Sitting In A Puddle On A Train 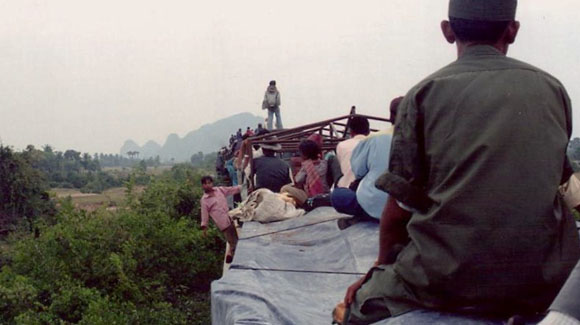 “Hello,” the young man shyly whispered after tapping me on the shoulder several times.

“Thank you,” he then said before turning around and victoriously running back to his group of friends who showered him with endless high-fives and pats on the back. My morning nap had been interrupted but I couldn’t help but smile.

I glanced around and sure enough, I was still surrounded by the same 150 Cambodians as when I had fallen asleep. We were all waiting for the same train, the only train of the day. And the train was late.

The train was scheduled to leave Kampot at 9:00am for the six hour trip to the capital city of Phnom Penh. Regular buses covered the distance in only three hours, but I had been in the mood for something different. And still sitting in Kampot when I could have already been in Phnom Penh was definitely different.

12:00pm…1pm….2pm….all came and went as I passed the time in and out of sleep, eating what appeared to be skewers of grilled chicken buttocks and engaging in basic Khmer conversation with the friendly people who approached me out of curiosity.

But alas! At 3:10pm, the loud, undeniable whistle of a train! As I stood up in anticipation, I observed a rusted locomotive pass by, followed by cargo car after cargo car. All I could see was a quarter-mile long train of cargo cars.

“Wrong train,” I concluded and quickly sat back down. But then I noticed something strange – everyone else around me was gathering their belongings and gravitating en masse to the edge of the train.

My conclusion was immediately proven incorrect as I watched a teenage boy climb up the side of one of the cargo cars, using the holes and dents in the metal to propel himself towards the top. He swung his legs over the edge and landed on the light blue tarp that covered whatever goods were being transported. The boy then reached over the edge with a blanket and helped pull his mother, sister and father up the side as well.

I looked to my left and I looked to my right and observed dozens of people climbing up the sides of over ten different cargo cars. Five year old children, elderly men and women and even a woman with two babies strapped to her back carried on as if this was the only known method of boarding a train in the world.

Not wanting to remain in Kampot for the rest of my life, I walked over to one of the cars and tried to map out a climbing route. I looked up and saw the widely smiling face of a young man hanging over the edge looking straight down at me. He motioned for me to throw my backpack up to him and without hesitation I did. And then he motioned for me to climb, as he clapped and shouted encouragements (I assume they were encouragements!) in Khmer as other passengers poked their heads over the edge and joined in.

Without too much trouble, I reached the top and tried to stand on the unsteady blue tarp, full of crooked hills and deep valleys resulting from the what appeared to be haphazardly organized cargo underneath. Walking on it was like walking on a bouncing trampoline and I chose to crawl over to where my bag had been placed instead. Five minutes later the train left the station.

Unique scenery this ride most certainly did provide. More scenery than anyone could ever possibly want from a train ride. Once the train inched out of the station at a speed of approximately 5 miles per hour, it remained at that speed for the entire duration of the trip.

The train moved so slowly that throughout the evening, passengers casually climbed down the side of the train, jumped off, relieved themselves in the nearby forest and then jogged back to their car and climbed up again – all while the train was moving!

At one point, a train conductor actually came around, stumbling over the tarp himself, in order to collect the train fare. However, he walked right by me without asking for any money. Due to an out-dated Khmer Rouge-era law, foreigners were not to be charged for government-operated transportation. This certainly wasn’t a generous gesture of the Khmer Rouge, but instead, a way to ban foreigners from moving around the country. Why nobody had changed the rule in the years since the reign of the Khmer Rouge had ended, I have no idea.

As soon as the sun set, the darkness left everyone with no option but to lie down and stare at the star-filled sky. It was the only option, that is, until the stars suddenly disappeared and the rain began to fall…and fall hard.

Almost every passenger had nestled into one of the more comfortable ‘valleys’ in the tarp, so it didn’t take long for all of us to find ourselves sitting in waist-deep puddles. At one point I tried to shift my position slightly, but this caused a not insignificant amount of water from my personal puddle to pour over onto the man next to me. So, for fear of drowning a small child, I just sat there motionless, occasionally letting out a slight burst of laughter at the situation.

The rain fell for about an hour, which was more than enough to ensure that I would remain soaked through my clothes until whatever time we might finally arrive at our destination.

That time turned out to be 2:00am. The scattered lights of the outskirts of Phnom Penh eventually gave way to the city center and as soon as the station was in sight, the people around me began packing up their belongings and inching towards the edge of the car.

And naturally, nobody waited for the train to come to a complete stop before tossing their bags and boxes onto the platform and climbing down themselves. I stood up, squeezed as much water out of my shirt as possible and grabbed my backpack.

Then came the gunshots from within the train station. Three shots were fired and then after a few seconds, two more. People instinctively hid behind walls, laid down on the ground or ran as fast as they could down empty train tracks away from the station.

Two dozen police officers immediately rushed onto the platform to prevent anyone else from climbing down from the top of the train. Two more gunshots were heard from inside the station. I dropped my backpack back on the tarp and took a seat once again.

I had finally reached my destination, but in Cambodia, as I’ve now learned is the case with every adventure we embark on in life, reaching your destination does not indicate that your journey has come to an end.

Have you reached this conclusion as well? Do the journeys we begin ever end?