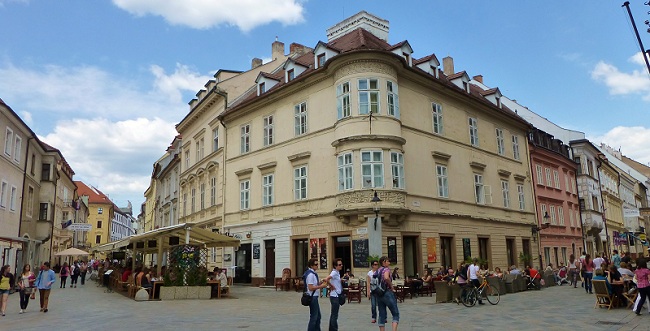 Last week I spent four days in Bratislava, Slovakia. It’s a small capital city, very small, in fact, with a population of only 450,000 or so. It’s the kind of city that always feels like a town, with a relaxed atmosphere and a lack of things such as heavy city noise, maniacal traffic or crowded streets.

Take a stroll along the Danube River, head through Hviezdoslav Square and into the nicely renovated Old City – where you’ll find a collection of interesting baroque palaces, Gothic Cathedrals, medieval towers and welcoming plazas – and walk up through the narrow medieval lanes that lead to the imposing Bratislava Castle, and you’ll enjoy yourself. It’s just all so very pleasant, everywhere you go.

Bratislava, Slovakia is almost entirely walkable, it’s attractive and it has an interesting history, good food (garlic soup and chicken with peaches are my favorites!), dirt cheap and excellent beer, as well as plenty of parks, forests and lakes nearby. It’s also only 60 kilometers from Vienna, 60 kilometers from the border with the Czech Republic and just a short 20 minute drive from Hungary. Not a bad location at all.

In fact, as I sat in the quiet backyard of my friends’ house each night during my brief stay, sipping wine and looking out over the Danube River, with the Bratislava Castle as well as Austria and Hungary in the distance, I found myself taking a strong liking to this place. I don’t think I could live here for too long as it may be too quiet for me, but a country town feel with access to everything you could need from a city sure makes for an appealing destination to spend some time in. 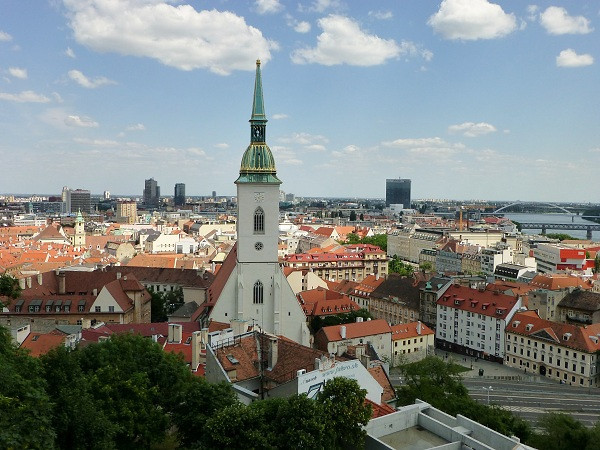 On a side note, I can’t tell you all how happy I was to find myself able to read and understand a decent amount of the Slovak language during my stay. This was due to a relationship I had several years ago with a girl from the Czech Republic when one of my side hobbies was trying to see if I could pronounce words such as zmrzlina and spolubydlící in less than 29 minutes.

And since the Czech and Slovak languages are very similar, this proved quite useful during this recent visit to Bratislava.

Simple things such as ordering food in restaurants, reading signs around the city and differentiating between the face wash and shampoo in my friends’ shower, were made so much easier as a result.

Actually, I might have messed up with the face wash. In fact, I know I did.

You see, on my first morning in Bratislava, as I prepared to shower, I spent a few minutes staring at the nine bottles of soaps and shampoos on the shelf inside the bathroom. And because I wasn’t wearing my contact lenses or glasses at the time, I had to take each bottle off the shelf, put it close to my eyes and try to decipher the purpose of the liquid inside.

I used the shampoo. I used the body wash. And then, I gave my face a thorough cleansing with the face wash.

The next morning I did the same and on my third and final morning as well. And on that final morning, after I dried myself off and put in my contact lenses, I decided to write down the name of the face wash I had been using as it seemed to be quite a good one to me.

So I grabbed the bottle off the shelf and began reading.

Well, wouldn’t you know it. Now that I could see more clearly, I realized that I had previously failed to notice a few things, important things mind you. I had assumed it was face wash after trying to decipher some of the Czech/Slovak words on the bottle. However, I had failed to read the words “Wash Lotion” that were written in English. Not only that, it was actually written “Intimate Wash Lotion”.

Further, not only was the ‘face wash’ called “Intimo”, but under that very word were two more words that I had severely misread before I had taken that first shower.

Very different meanings there, although there’s no denying that my face did feel quite smooth. Anyway, as a result, from now on, I’m quite sure that I will always put my contact lenses in my eyes before I step foot into any shower.

On a brighter note, due to this little incident, I’ll shall certainly never forget my trip to Bratislava. I shall also look forward to visiting my friends there again and exploring more of the countryside next time around. Of course, if I want my friends to actually invite me again, I should probably send my friend a new bottle of “Intimo” considering how much of her current bottle I used on my face.

Have you been to Bratislava, Slovakia? Is it a place you’d be interested in visiting? Any face wash recommendations?