Blind For A Night: A Most Unusual Meal In Bucharest

Blind For A Night: A Most Unusual Meal In Bucharest 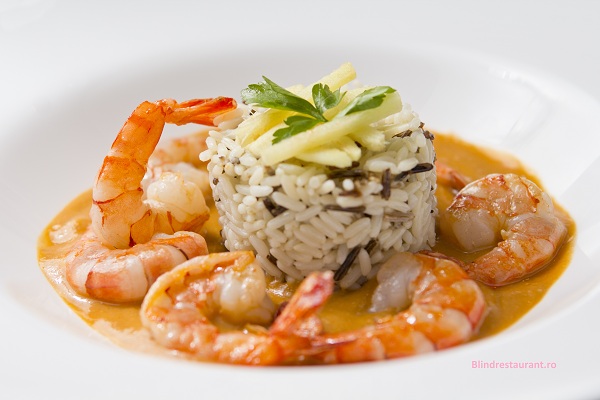 At first, the restaurant looked normal enough. It was somewhat small, with only 8 tables or so, but it was comfortable and seemed to have a cozy atmosphere. The only problem was that I had no idea what kind of restaurant I was sitting in.

My friend had invited me out for dinner the night I arrived back in Bucharest a couple of weeks ago but she refused to tell me where we were going or what kind of food we would be eating. It was to be a complete surprise.

And so, after a short taxi ride to a quiet residential neighborhood, my friend led me to a long, unmarked gray building, which we entered through an ordinary looking door. Immediately, a friendly waitress brought us over to a table by the window and we sat down.

My friend and I each ordered a hot tea and we began to catch up. Of course, with this being a surprise meal and my friend offering no hints whatsoever, my eyes did wander around the room from time to time, trying to find some kind of clue about what I was about to experience.

After a few minutes, I began to realize that the name of this restaurant was nowhere to be found inside (and I had not seen the sign outside either as my friend blocked it from my view) and even the decorations in the room gave no indication about the theme or cuisine to be served.

We continued to drink our tea and talk for a while, and it wasn’t until fifteen minutes had passed that things began to seem strange. First of all, it occurred to me that we never received any menus apart from the drink list and that nobody at any of the other tables were reading menus either. Then, a male waiter suddenly appeared from a random door, approached our table, asked if he could take our jackets to the cloak room and then requested that we turn off our mobile phones.

And then he left…leaving me confused while my friend just sat there and laughed.

The male waiter soon returned, but this time he confused me even more because he was wearing a massive night vision apparatus on his head. Yes, you read that correctly. With a big smile on his face, he asked both of us to join him over in a darker area of the room where he proceeded to give us each a plastic apron, the use of which he highly recommended. So naturally, I put the apron on.

Then he instructed my friend to place her hands on his shoulders and me to place my hands on her shoulders. And off we went, around a corner and towards another room, which had been hidden from our view. It’s a good thing we were all holding on to each other because as soon as we entered this new room, we encountered complete and impenetrable darkness.

Stumbling through this darkness, we started taking left turns and right turns, following this lunatic with the night vision gear to wherever it was he was taking us. For all I knew he was leading us into an ambush where we would be attacked by a crazed army of night-vision junkies who would stab us with their swords, toy with our brains and leave us alone in this dark room until we bled to death.

Although, as we continued walking, I did hear some voices around us, and even some laughter, all of which proved to be somewhat comforting at the time. By the time the waiter had led us across the room, still in complete darkness, and literally placed each of us into a seat at what felt like a table, I started to relax. However, I did have some odd thoughts running through my head, such as…

Will I have to get naked? Will there be torture involved with this meal? Why am I friends with this person?

But once I felt the top of the table and realized that there were plates and forks and knives in front of me, I finally stopped wondering if I would be killed by a machete-wielding waiter while in the midst of taking off my pants.

“Are we really eating in such darkness?” I asked my friend. She didn’t answer me, so I asked the question again. This time she apologized because she had been nodding ‘yes’ without realizing that I couldn’t see her. We hadn’t even begun to eat and we were already running into issues.

This was all a part of my introduction to the concept known as “The Blind Restaurant”, which I think is one of the coolest restaurant ideas I’ve come across. It’s actually not about being in the dark. It’s about being completely blind. At no point could we see anything at all, not while eating our salads, not during the main course and not during dessert.

With the sense of sight completely removed, one faces a dining and social experience that is completely free of visual judgments. The concept might sound quite basic, but in practice, it’s much more intriguing than you would imagine and, for one and a half hours, I thoroughly enjoyed the unique sensation of relying on my other senses.

Sure, I spilled some wine as a result of not being able to see. I might have dropped some pasta onto my lap as well and even miscalculated the location of my mouth once or twice, resulting in pasta sauce and ice cream finding their way into my nostrils, but I don’t think I’ve ever laughed as much during a meal as I did that night.

And at one point, I even thought about taking off my shirt and placing tomato slices (I think they were tomato slices) on my chest, knowing that nobody in this place could see a thing. Luckily, I remembered the guy with the night-vision gear just before I unbuttoned my shirt and I decided to keep my clothes on in the end.

As for the food, it was quite good as well. Here’s a photo of the salad…

And a photo of the main dish…

While we’re at it, here’s a photo of the interior of the dining room…

Not a bad looking place, right?

Once we finished the dessert, we simply had to raise our hands and wait for the waiter with the night-vision gear to collect us from our table and lead us out of the darkness. After returning to the world of light, we were then invited to once again take a seat in what turned out to be the ‘waiting lounge’ where we could finish our bottle of wine.

We sat there for thirty minutes chatting with the waitstaff about the restaurant’s concept while learning that there are other similar restaurants throughout Europe and in the US.

I personally love the idea of a “Blind Restaurant” as I really enjoy participating in activities that are a bit out of the ordinary or that involve doing things we simply don’t ever think about doing. Spending time and eating in such complete darkness definitely fits into that category.

And as you can see, there is no torture involved. But I am willing to bet that self-mutilation, in the form of having your face pierced in several locations by your misguided fork, is an all-too-common occurrence.

Have you been to such a restaurant before?