The Best Worst Museum in the World

The Best Worst Museum in the World 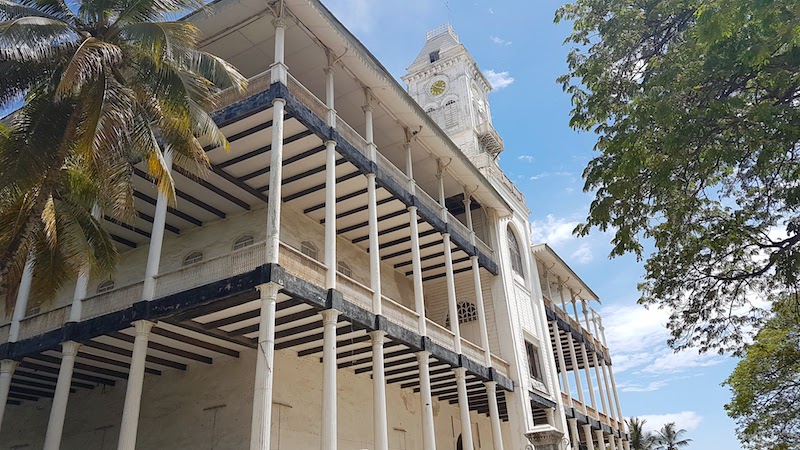 We pushed open a massive wooden door and found ourselves in a small, dark room. A middle-aged man was sound asleep in a plastic chair behind a dusty wooden desk. He woke up to the creak of the door as it closed and without hesitation grumpily blurted out, “Tickets here”.

He told us that two tickets cost 16000 TSH ($8 USD), which seemed to be an arbitrary number. The tickets themselves had no price on them and there wasn’t any sign or price list, but I handed over the money anyway.

After all, this was THE House of Wonders in Stone Town, Zanzibar.

With tickets in hand, and armed with the basic knowledge that this was the ceremonial palace of the second Sultan of Zanzibar, built around 1883, we pushed through the second wooden door and straight into the heart of the museum, ready to educate ourselves even more.

At the time, we had no idea whatsoever that we were entering the best worst museum in the world.

It all began as soon as we stepped into the main hall, as this is where we discovered… absolutely nothing. Okay, there were a few things in there but it would be hard to claim that it amounted to much of anything.

I can honestly say that after spending almost 30 minutes inside the House of Wonders, we still had no idea what this place was all about. Even by looking at some items on display related to Swahili culture, we didn’t really learn anything. We didn’t even see anything that could be classified as a ‘wonder’, at least not in the conventional sense.

But, This Worst Museum Was Awesome!

Instead of me trying to do the impossible – describe this museum – let me simply show you:

It all started with a very nice exterior…

And then it went downhill quickly…

Did you see the colorful umbrella?

That was a typical room full of…nothing.

About a week before coming to Stone Town, when we were on the beach in the village of Jambiani, we met a British couple that told us we needed to visit the House of Wonders during our stay in Stone Town. They also warned us that it was a special place because of how un-special it really was. We had no idea what on earth that meant at the time but now that we’ve been to this mighty fine specimen of a museum, we understand exactly what that couple was talking about.

The House of Wonders in Stone Town was by far the best worst museum that I have ever had the full pleasure of visiting in my 18 years of traveling this world.

In a way, while it lacked any ‘wonders’ in its display cases, the whole darn place was a wonder, when taken as a whole. A truly brilliant wonder if I must say so myself!

I was like a kid running around that museum, giggling and skipping and taking photos and letting my jaw drop in complete and joyous awe over and over again as I turned each new corner, and continued to find pretty much nothing.

That’s why, if you’re ever in Stone Town, please go to the House of Wonders. Hand over the $4 to the ticket man (or whatever he decides to charge you that day), push open that wooden door and fully enjoy the all encompassing feeling of not enjoying. It can’t be described any other way.

Naturally, I highly doubt that the organization or people who run this museum are aiming to achieve what I have described above (the best worst museum) but in a way, whatever inefficiencies, lack of organization or lack of funding they face, the result, ironically, is simply beautiful. And I’m not too sure if they should change a thing.

I leave you with a couple of last photos:

Any of your own nominees for the best worst museum in the world? Let’s hear them!