Over the past few years, every time I visit my friends in NYC, a most interesting phenomenon has taken place. We’ll be sitting around one random morning, perhaps in the living room of my friends’ apartment or maybe at the funky, yes, I said funky, Tillie’s Brooklyn Cafe, a few blocks away, and we’ll be discussing the usual topics that we discuss during my yearly visits. These topics include our desire to become stand up comedians, our goal of one day owning our own hostel and whether or not walnut raisin cream cheese should legally be allowed to be smeared onto an onion bagel.

However, whatever the topic, there always comes a moment when our conversation, after twisting and turning in every possible direction, suddenly leads to one idea that always seems so brilliant at the time.

And then, 2 hours after that moment of brilliance strikes, the three of us find ourselves in a rented car driving out of NYC through the Lincoln Tunnel and eventually, on to the Garden State Parkway. We’re on our way to Atlantic City, once again.

For those not too familiar with Atlantic City, it can be described as a mini-Las Vegas that is located along the east coast of the US. Ultra popular up until the early 1990s, this city has struggled over the past two decades, and especially in the past 8 years, with the growth of other nearby casinos and dozens of proposed large-scale projects being scrapped due to the recent financial problems in the US. The result is a current day gambling town that consists of somewhat outdated beachfront casinos, a mile-long Boardwalk full of fried dough stands, Chinese massage parlours and what is an incredibly suspicious number of psychics and a local community that appears to suffer from some of the most extreme poverty I’ve seen anywhere in this country.

Atlantic City lacks the kind of ‘WOW’ factor that even those who dislike Las Vegas can’t help but notice in that town. There is none of that Vegas nightlife or intensely energetic atmosphere or visually impressive setting in Atlantic City, which shouldn’t be the case given its coastal location and unique Boardwalk. It’s as if this town somehow ruined a perfect opportunity to continue growing as a major destination.

Of course, my friends and I do decide to spend two days here every year so the city must be doing something right I guess.

This year’s adventure began at 6:30pm, the moment we checked-in to our hotel. And after a quick two-minute visit to our room, we went right back outside, not so much because we were in the mood to start gambling, but because we were in desperate need of some leg-stretching due to a serious map-reading error on my part during the drive down from NYC which caused the normally two and a half hour journey to take over four hours instead.

So we took a brisk walk along Atlantic City’s famous Boardwalk in order to loosen ourselves up and to release all of that tension from being stuck in a car for so long. Then, after an hour of walking, we suddenly looked at each other, nodded in unison and entered the first casino we came across.

And that’s when I immediately lost $20 at the Taj Mahal Casino.

We then moved next door to Bally’s, where we all proceeded to lose $40 within twenty minutes.

A quick stop at Caeser’s Palace Casino and we had all lost $40 more. 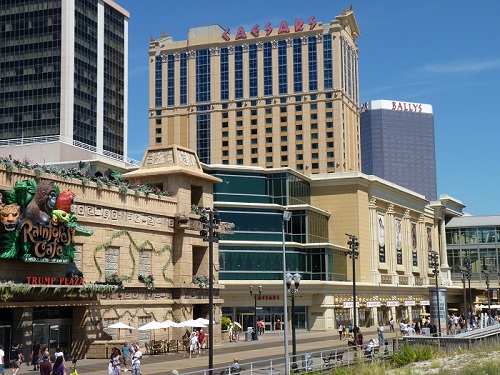 With our gambling off to a horrendous start, we all decided to step away from the casinos for a while, which we did by wandering away from the Boardwalk and around the streets of the eerily deserted, and shockingly run down, town of Atlantic City itself.

We did manage to find a small, friendly Mexican restaurant where we ate a silent dinner, all of us nibbling ever so slowly on our quesadillas, not wanting to think about what lie ahead once we finished our meal. But by the time we did finish those quesadillas, as well as our second round of drinks, the three of us began to notice that recognizable, yet inexplicable and very dangerous, boost of confidence, the kind that only appears on a gambling trip. You know the one, that feeling of such invincibility that causes you to run down the street while still wiping cheese and sour cream from your mouth and to then march straight into the Tropicana Casino, walk directly up to the craps table and immediately pull out $100, ready to turn that amount into $1000.

Unfortunately, or perhaps luckily, on this particular night, my confidence fell short in the end and after standing at the craps table for fifteen minutes with that $100 in my hand while doing nothing but trying to get a piece of lettuce out of my teeth, I just shrugged my shoulders and walked away.

And so my first night in Atlantic City came to an end. By 11pm my friends and I were back in our hotel room watching the terrible Laurence Fishburne film, “Predators”, and by midnight, I was sound asleep.

With another full day and night to spend in this city, we all made sure our second day got off to as late a start as possible in order to limit our money losing potential. In fact, it was well after noon before we finally decided to walk to the tiny local diner on Atlantic Street where we always eat breakfast at least once during our yearly trips to this town.

There’s really no better way to make yourself not feel like gambling than to stuff your face with a three-egg omelet and a pile of hash browns. And I am happy to report that this method was once again successful as the only thing I wanted to do after this meal was to sit on the beach and take a nap, which is exactly what I did.

Eventually, however, after an hour on the beach, that false confidence that only the flashing lights and cheesy sounds and gigantic billboards of massive casinos can create, began to creep into my head yet again and the only thing I could think about was winning, and winning big. Thirty minutes later I found myself back inside of the Tropicana Casino and five minutes after that I was back out on the Boardwalk, having lost another quick $20 bucks.

As you might be able to tell by now, I’m not much of a gambler, and in fact, neither are my friends. The idea of playing craps or blackjack for hours on end does sound slightly appealing but the unappealing thought of possibly (or probably) losing $200 is significantly more intense. As a traveler, it’s difficult not to put things in perspective. Two hundred dollars lost at a casino is two weeks worth of traveling in India or one month’s rent in Thailand or 400 tostadas from my favorite tostada joint in Playa del Carmen.

So it takes a lot to get me to part with my money, which is why I was so surprised when even the above eye-opening monetary comparisons still could not keep me away from the craps table on my second night in Atlantic City.

Of course, as I write this now, I most certainly wish that I had been able to convince myself to stay away as, which I’m sure you could have guessed by now, I wasn’t the most successful of craps players that night. Granted, I had a wonderful time chatting with the team of dealers who turned out to be quite an enjoyable bunch to be around, but, as nice as those guys and gals were, I think I’d probably be willing to give up the friendly chit chat in order to have the money I lost right back in my pocket.

Well, so it goes.

Once again, by midnight, my friends and I were back in the hotel room, however, this time, instead of watching a movie, we decided to juggle bottles of water and build forts out of chairs and blankets. Then, four minutes later, once we became bored of those activities, we went to sleep and another trip to Atlantic City came to another sad end.

Actually, it was only sad until about halfway through our drive back to NYC the following morning when we discovered a satellite radio station that played nothing but short clips from standup comedians, including one of my favorites, Steven Wright. Soon enough, our gambling losses were forgotten and by the time we rolled back into Brooklyn, we couldn’t have been in a better mood, which is why it shouldn’t be a surprise that we have already planned our gambling strategies for next year’s visit to Atlantic City.

Have you been to Atlantic City or any other gambling destinations? Surely there are a few gamblers out there in the crowd…and hopefully you’ve had much better success at it than I have!