Announcing my “Wandering Earl Tours” for 2015

Announcing my “Wandering Earl Tours” for 2015 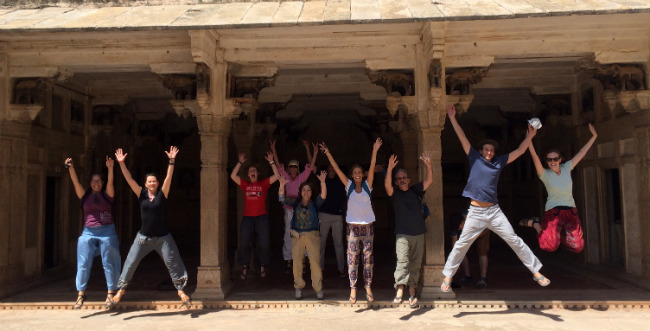 It began as a simple idea back in 2012. I decided to offer a tour to India.

Without much planning, actually, no planning at all, I randomly announced that first tour right here on the blog. It sold out in less than 48 hours.

Then I spent the next couple of months running around, organizing and planning every aspect of that tour right up until the last minute. November arrived, the tour began in Delhi and just like that, Wandering Earl Tours was in action.

Things seem to have gone well since then as requests for more tours starting coming in. Now I’ve run three trips to India already. Not to mention trips to Romania, Istanbul, Mexico and Southeast Asia as well.

And now the plan is to offer even more tours next year, some to the same destinations, and some to a few new ones too.

Keep in mind…these are not normal group tours. They are laid-back, small group excursions that give you an in-depth experience you simply can’t have on any other organized trip. I also focus on offering the absolute best value I possibly can at all times.

The feedback so far has been extremely positive and I’ve even already had several repeat travelers who have joined more than one tour!

February:
– Wander Across INDIA
(my 4th tour to this country, it shall be another incredibly rewarding adventure)

March:
– Wander Across SE ASIA (Thailand/Cambodia)
(my first SE Asia tour was such a success, I immediately organized a second one)

April:
– Wander Around ISTANBUL
(one full week in one of the most fascinating cities on the planet)

June:
– Wander Across KYRGYZSTAN
(few people visit but those that do fall in love with this stunning, friendly country)

– Wander Across VIETNAM
(with so many requests for a Vietnam tour, it was time I put one together)

– Wander Across ROMANIA
(medieval towns, castles, mountains, traditional culture & more – it has it all)
[/jbox]

Some of these trips I will lead myself. Others, I actually won’t. I still create all of the itineraries and work out all of the details for every tour, all based on my own travels. But for some, I happen to know people that would do a much better job leading a particular trip than me.

An example is my recent SE Asia Tour two months ago. I got dengue fever while in Bali and couldn’t lead the trip so I handed it over to my friend Sakai. Sakai is an expert on Thailand and Cambodia, he speaks the languages and has lived there for many years.

And while I was hoping the feedback from that tour would be good, it actually ended up being better than good. Way, way better.

“I use the word amazing a lot to describe this trip. It is the best trip I have ever taken. I believe the itinerary you put together is most of the reason for this. It was a great balance of organization and optional activities. For me, an awesome first trip to Asia!” – Jen. W

“Awe. Some. Enough said. Sakai knows his stuff (local languages; best places away from the super frequented ones). He entertains. He’s helpful. And just overall a good guy. I consider myself lucky to have met him. Does not happen often.” – Paul H.

“Sakai is awesome! Speaks the languages and has a lot of connections, knows big time about history and culture of the area. Also super fun and flexible, but makes sure everything is done, I didn’t worry at all during the whole trip.” – Vanessa R.

You get the idea. Sakai knows Thailand and Cambodia. The tour was awesome. Now, I want him to lead my Southeast Asia trips.

So, here we go. The above tours are what I’ve put together for the first half of 2015. And it goes without saying that I look forward to having you join one of these tours if you happen to be interested.

Have a read of the tour documents (by clicking on the links above) and just follow the instructions inside if you do want to join!

Also, if you have any questions at all, just send me an email. I’ll always reply as quickly as I can.

Enjoy your week wherever you may be and here’s to all of your future travels!

“What a trip of a lifetime for all…truly outstanding…everything just flowed. I am definitely going on another journey if you’ll have me!” – Albert R.

“My trip with Wandering Earl was fantastic! We hit the sights I had wanted to see…along with a ton of places and experiences I never would’ve come up with on my own. I am hoping to get on another Wandering Earl tour in the near future!” – Leah F.

“Traveling with Earl was everything I thought it would be and more! His genuine enthusiasm was contagious, and he went above and beyond to submerse the whole group in as much culture as he could. He quickly became not only my tour guide but my friend, and I’m already planning on traveling again with him in the near future!” – Michelle M.