An Animal Rescue Center Every Traveler To India Should Visit

An Animal Rescue Center Every Traveler To India Should Visit 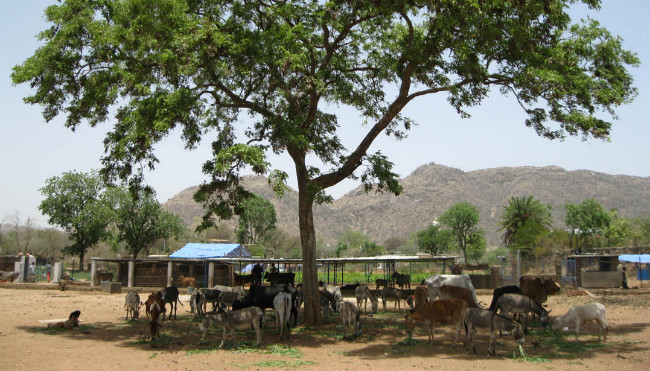 On the outskirts of Udaipur, a city of 500,000 people set ever-so-picturesquely along the shores of three lakes in the middle of India’s Rajasthan state, sits a gate, a simple iron gate, midway down a bumpy dirt road. This gate is kept locked at all times but if you wait in front of it for a moment or two, someone will soon approach from the other side, someone who will unlock the gate with a smiling face and kindly ask you to enter.

You take a few steps forward and just like that, you’ve entered a world that you probably wouldn’t expect to find in these parts.

Welcome to Animal Aid Unlimited, an animal rescue center, sanctuary, and treatment operation for mistreated and injured animals of Udaipur. Set up in 2002 by Jim Myers and Erika Abrams, along with their daughter Claire, this operation has treated over 40,000 animals to date, including dogs, donkeys, cows, monkeys, pigs and birds, rescuing approximately 10-15 animals per day from the streets. Some of those animals are treated and released and others live out the rest of their days at the center if they are not able to fend for themselves. At any given time there are around 400 animals being taken care of on the premises.

One of the women on my current India tour had heard about this place in a book she had read and so, a handful of us decided to head out there one afternoon. And we ended up staying for almost two hours, simply intrigued by the entire operation. From the spotless, well-organized grounds to the efficient and well thought out systems in place for grouping and taking care of the animals to the dozens of staff on duty, ranging from veterinarians to vet nurses to massage therapists to foreign volunteers…it was a remarkable oasis in the midst of the desert where animals of all kinds live so incredibly well.

Upon arrival, Raj gave us a tour of the entire grounds, a tour that took us up close and personal with newly arrived dogs and donkeys with broken legs and open wounds, dogs infected with mange, cows that had been hit by cars, paralyzed animals, monkeys that had been electrocuted, pigs that had been mistreated and on and on. And while you might think that this would all be extremely difficult to witness up close, we all found the opposite to be true. It was simply wonderful to witness so many animals that would have been left to die on the streets, now walking around, laying down, hobbling along, looking and behaving as if they are so happy to have ended up here instead. This sanctuary offers them a worry-free life where they can interact with and receive attention from caring people every day, including any travelers that decide to visit. Animals were constantly approaching us, eager to be played with and truly excited by our presence despite any ailment or injury they might have been suffering from.

Of course, we could not help but ask about every animal we passed and about how they came to end up at the sanctuary. And as you might imagine, there were some brutal stories of abuse to be heard. But as I mentioned, to see these animals living here and being treated so well, created a sense of relief that far outweighed any sense of shock or horror that I might have felt at first.

As you might be able to tell, I was blown away during our visit, especially after witnessing the passion, over and over again, that was so visible in the eyes of every staff member, all of whom dedicate their lives to helping as many animals as they possibly can. Just watching Sooraj, the massage therapist/healer, interact so carefully and lovingly with some of the paralyzed dogs, some of which started to walk as a result of his treatments, was enough to convince me that this is one impressive animal rescue center that deserves some attention.

Yes, I know that there will be some critics who will state that the money used for this program could be used to help people who are also suffering in this country. And that is true. But so could the money we spend anywhere and in my opinion, if the founders, the 40+ staff and all the volunteers at Animal Aid Unlimited are indeed so passionate about improving the lives of helpless animals, then I think that’s exactly what they should continue doing.

I’m certain that one visit here, after spending a few minutes interacting with playful Tony, a dog whose leg was chopped off and whose face was hacked with a machete, or with laid-back Lance, the donkey whose legs had been tied together before being rescued, or with a cow that had been hit by a car but is now walking again, will convince you of the same. On Animal Aid’s website, you can also get an idea of what kind of care this center provides, with plenty of before/after photos of all types of animals who were injured or abused.

Here’s a couple of examples (BE WARNED! The photos are quite graphic, but wait until you see how well each dog looks now!)…

It’s simply amazing to see the recovery of these animals in the photos above. Imagine what it must be like to see it first-hand at the center!

India. So much to experience in this country. And if you’re the kind of traveler that enjoys doing things that are a little different to what most travelers get up to, this is an opportunity to do just that when you’re in Udaipur. Whether you spend a few hours, a full day or even a longer period of time as an actual volunteer at Animal Aid Unlimited, you’ll have a chance to be a part of something special, an organization that involves great people doing great things, in this case, for the thousands of helpless animals in this city.

I want to give a huge thank you to Raj, Sooraj and Claire, all of whom were wonderful hosts during our visit…keep up the amazing work!

ANIMAL AID UNLIMITED
Location: Near TB Hospital in Badi village (8km from Udaipur)
Visitor info: Visitors are welcome until 5pm any day of the week and it’s just a short ride by auto-rickshaw or taxi to the location. And of course, volunteers of all ages and backgrounds are welcome as well. The organization doesn’t provide accommodation for volunteers but they do offer a great deal of assistance for those who sign up, helping you find a place to stay and assisting with everything else you could possibly need.
Website: www.AnimalAidUnlimited.com
Facebook: https://www.facebook.com/AnimalAidUnlimited

Anyone looking for a great volunteer opportunity in India? Any thoughts about the work this organization is doing?