An Afternoon Meeting With A Queen

An Afternoon Meeting With A Queen 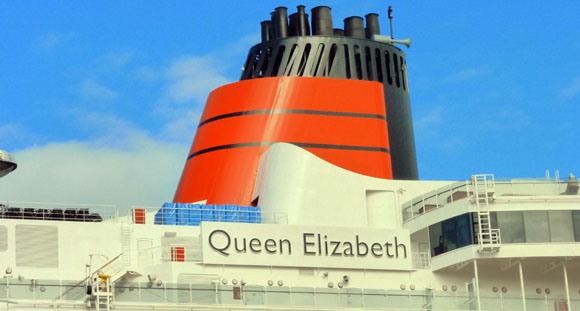 Walking down George Street towards Sydney’s Circular Quay, I stopped dead in my tracks the moment my eyes unexpectedly fell upon her. And before I was able to continue moving in her direction, I needed several deep breaths and a nod of reassurance from myself that I could handle being any closer.

Only somewhat convinced that I would not break down in tears or begin begging for her to take me back, I approached cautiously, with the hair on my arms standing on end, my heart pounding uncontrollably and with the undeniable magnetism of this seductive Queen slowly engulfing me.

I wanted to turn around and run, but my feet refused to do so. And before long, I had no choice but to admit what was happening.

Exactly as I had feared, as I stood there, right next to the Queen Elizabeth cruise ship docked in Circular Quay, I was overcome with an intense feeling that I was home.

For nearly five years I worked on board cruise ships as a Tour Manager, the final two years of that ‘career’ spent working for Cunard Line and more specifically, on board the Queen Mary 2 ocean liner. Back in 2008, I made the decision to leave ‘ship life’ behind, and since then, have only had minimal contact with the industry.

But last weekend, while talking with a friend here in Sydney, I learned that the Queen Mary 2 and its sister ship, the newly built, Queen Elizabeth, would be docking in the city a couple of days later. I quickly fired off a few emails and soon discovered that most of the crew members I had once worked with were now working on board the Queen Elizabeth.

And so, on the day of the ship’s arrival, I made the pier at Circular Quay my destination. Unfortunately, with only two days notice, I was unable to secure a visitor’s pass to actually go on board and so I had no choice but to hover around the ship and wait for some of my old friends and co-workers to hopefully make their way outside.

After twenty minutes of waiting by the terminal building exit, I began to think that my visit would consist of nothing more than a glimpse of the ship itself as not a single crew member I recognized walked out of those doors. But before I decided to give up completely, I climbed the stairs up to the second level of the terminal building, which offered a direct view onto Deck 5 of the ship, an outside deck that passengers use to embark and disembark the vessel.

And as I eagerly scanned Deck 5 for familiar faces, I suddenly noticed a wave in my direction. It was a wave that I will never forget. The man attached to that small hand turned out to be Gurung, one of the Nepalese security guards, and kindest people on the planet, with whom I worked during my two years on board the Queen Mary 2. 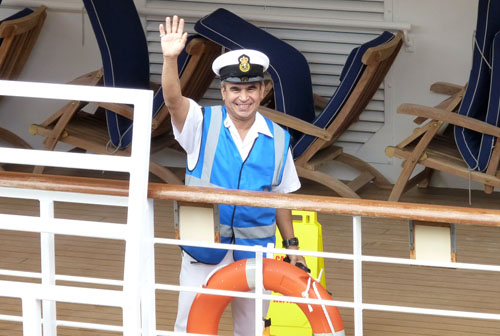 Somehow, despite the crowd of at least one hundred observers standing all around me and despite the fact that I hadn’t seen Gurung in over 2 years, the forever-smiling Gurkha instantly recognized me. Sure, we had worked together, but when you consider that Cunard employs at least 3500 crew members on it’s three ships in total, you can understand why one smile and wave from Gurung simply astonished me.

For a few minutes, up until Gurung had to return to his duties, I was beaming with happiness as we yelled out to each other (he was on the ship about 50 feet away from me), asking each other questions and trying to catch up as best we could considering that he was on duty and everyone around us was listening.

THE LURE OF SHIP LIFE

With a little help from Gurung, who used his two-way ship radio to inform the current Tour Manager and friend of mine that I was outside, I soon found myself catching up with Susanna, an Italian girl who actually began her ship career as one of my tour staff several years prior.

It did not seem as if an entire two years had passed since I’d been gone, but as if I had just returned from another 6 week vacation in between contracts instead. And as our conversation was interrupted dozens of times as Susanna was forced to deal with Tour Department issues on her radio, on her mobile phone and with the tour operators standing on the pier, it was admittedly difficult for me not to step in and help her out. A part of me wished I was still working on board.

And then, when the ship’s Human Resources Manager, a very kind British fellow I had worked with, suddenly appeared and with a wide smile across his own face began trying to convince me to return to ship life, I must admit that I found myself feeling quite homesick.

Forget about the money, forget about the travel that such a life offers. I stood there homesick for the community that exists on board cruise ships, a community where crew members from over 80 nationalities work and live together, sharing experiences that nobody else can begin to understand, all inside of a multi-cultural floating world unlike any other that exists on the planet. Sure, I could work on a yacht or volunteer my services on bayliner boats (such as those by Boat Quest) around the world, but working on board these mega-ships is what has always appealed to be the most.

I feel homesick even writing about it now. 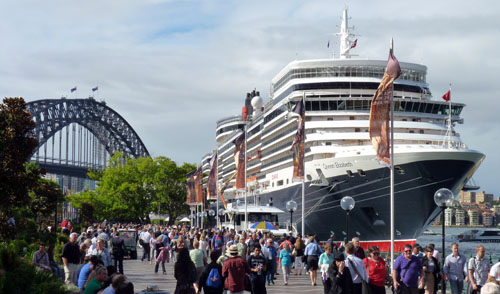 After two hours of catching up with Susanna and a few other crew members I recognized, I eventually had to say goodbye. With some real hesitation, I forced myself to start walking away from the Queen Elizabeth, while fully confused as to whether or not I would rather be walking up the gangway and on board the ship instead.

My mind began racing with visions of returning to ship life and with questions such as, ‘did I leave ships too soon?’ and ‘should I return for one, or maybe two, more contracts?’ bouncing around my head. Such is the temptation of life on board and even after two years away, the temptation to return is as strong as ever.

For now, however, I do plan to maintain my current course in life. And one of the reasons why I am heading to Chiang Mai, Thailand in a few days is because of the large group of travelers and bloggers that currently live there. It is a rare opportunity for me to be part of a community once again.

With that said, it’s always comforting to know that a return to ship life is only a mere phone call away.

If you happen to be interested in entering the rewarding and addictive world of ship life yourself, be sure to check out my useful eGuide, “How To Work On Board A Cruise Ship”. It will help get you there in no time at all.