All Is Well In Istanbul, Thanks To Shakira

All Is Well In Istanbul, Thanks To Shakira

Here I am…in Istanbul, where my first two days have been filled with visits to some of the major landmarks of this great city, many of which are within a mere 300 meters of where I happen to be staying. I spent time wandering through the too-impressive-to-describe Sultan Ahmed Mosque (Blue Mosque), the massively-domed, basilica-turned-mosque of Ayasofya (Hagia Sophia) and the mind-bogglingly endless labyrinth that is Kapalıçarşı (Grand Bazaar), entering each with an intense level of curiosity that was quickly transformed into an overwhelming sense of sheer awe.

However, whether that awe and wonder were actually the result of the history and inspiring atmosphere that surrounded me or of the fact that Istanbul itself was no longer a distant and hopeful destination, I do not know. All I do know is that it felt damn good to be exploring a new land once again.

But of course, there is much more to exploring than simply enjoying the sights and so it came as no surprise that when I climbed into bed at 6pm on my second day in Istanbul, too exhausted to remain awake, I realized that something was indeed missing. It wasn’t an extra pair of boxer shorts or a rain jacket (which would be nice given the daily downpours) that I longed for, but rather, a deeper connection to this city. It is true that I had been here for only 48 hours, yet I was eager to reach that level of comfort that helps turn one’s outer observations of a destination into inner exploration and growth.

I knew that connection would come eventually, but I ended up falling asleep in fear of wandering around the Middle East for a few months as only a quiet and distant outsider.

As luck would have it though, Istanbul did not want my day to end on this note and only a few hours later, at 9pm, I suddenly woke up, incredibly hungry and restless.

TIME FOR A WALK 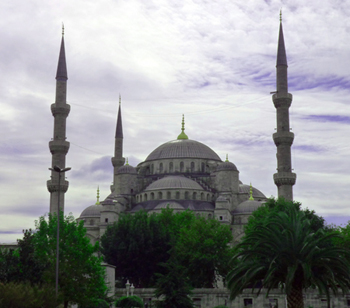 I ventured outside once again, strolled around the Blue Mosque, picked a random street and began walking. For a long time I walked, quite rapidly in fact, glancing around at the people and places I passed but not once slowing down. At this point, I realized for certain that I was stuck in that initial stage that travelers go through upon arrival in a new place, that stage where we have yet to ‘click’ with our destination. We’re not necessarily overwhelmed or unhappy, but we tend to walk around in a state of extreme self-consciousness, lacking confidence in our ability to immerse ourselves in the culture around us.

This state may cause us to avoid crowded places, such as restaurants, local gathering spots or anywhere that we know would offer a unique glimpse into the daily life of a city. We often remain silent, barely speaking to or interacting with anyone. We sometimes walk abnormally fast, put things off until another day, spend too much time on the internet at our hostel/hotel and ultimately try to convince ourselves that despite all of the above, we are loving every minute of our adventure.

In reality, we’re simply trying to avoid sticking out as ‘that tourist’, but we end up engaging in behavior that makes us much more ‘that tourist’ than if we simply followed our inner tour guide. We become suffocated by the thought that people will whisper about us, stare at us, wag their fingers at us…the uncomfortable foreigner so clearly out of place and on their own. And so we practically run past that seemingly interesting and popular local cafe, inexplicably shaking our head as the waiter calls out to us and left to wonder why we’re being so foolish.

Well, I was perfectly aware that my first two days here were fully controlled by all of these silly fears. I won’t even begin to try and deny that! It was only natural, but I was ready to find a way to shed those fears that were keeping me from connecting with Istanbul. Therefore, after having walked halfway across the Old City on that second night, in what must surely have been a record time of about 29 minutes, I suddenly stopped, turned around and headed back towards the small, bustling local restaurant that I had passed earlier.

This time, as I approached the restaurant, I actually slowed down, made eye contact with the waiter and summoned all of my strength to greet him in Turkish. I then took a deep breath, stepped inside and began to tackle my fears.

It took only a few minutes. Well before my delicious plate of stuffed eggplant and bell peppers was served to me, I had already found my groove. My confidence had quickly grown enough for me to begin muttering the ten Turkish words I’d been practicing and to ask endless questions about everything on the menu. No longer did it bother me that locals were indeed looking in my direction and even laughing at my apparently odd decision to drink a hot tea before my meal. Instead, I greeted all those around me and simply joined in the laughter.

I continued to get even more comfortable and I felt the difference. The connection between traveler and destination that I had sought, had finally begun to form. After an hour or so, I was completely relaxed, knowing full well that I was now prepared to explore this culture more deeply.

All it had taken was one meal in a restaurant. One moment of not caring that I am a foreigner in a foreign land. Once I accept the fact that, no matter what, we are all tourists or travelers or whatever word you wish to use, and that there is no avoiding it, I find that traveling becomes much easier and infinitely more rewarding.

Who cares if we look silly? Truthfully, we probably do look silly to those around us. So instead of using that knowledge to keep our distance from a particular people and culture, why not use it to connect with them instead?

The highlight of my evening meal came when the television screen in the corner of the restaurant started showing a Shakira video. As she began shaking her hips, as only she can do, I felt a tap on my shoulder. As I turned around, I found the elderly woman next to me (who I had earlier learned was from Lebanon), pointing at the screen and asking me, “She Shakira?” 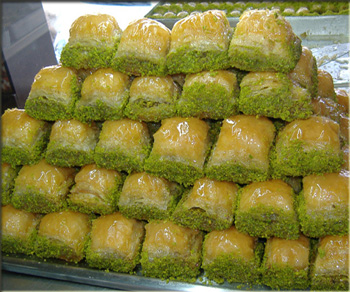 After I confirmed that it was indeed Shakira, she quickly turned to her husband and with a huge smile on her face said something in Lebanese that included “Ahh, Shakira!”, to which her husband excitedly clapped his hands twice and repeated “Shakira, Shakira, Shakira” over and over again.

Now I really have no idea if this Lebanese couple was simply a huge Shakira fan or if they had made a bet as to who the scantily-clad woman on the television was, but either way, it was a spectacular moment. And once their excitement died down, we all ended up ordering some more tea and sharing some baklava. Then, before they eventually left, they invited me to visit them once I make my way to Beirut.

On my walk back to the section of Sultanahmet where I am currently staying, as I practically skipped down the street with happiness, I popped into a pastry shop for some more baklava (Okay, I went into 3 baklava shops. It’s important to compare quality!), spent some time chatting with a grilled corn vendor and found myself helping a Turkish couple, who were visiting Istanbul for the first time, find their way to their hotel. I ended up interacting with Istanbul more in those thirty minutes than I had in my first two full days!

And when I climbed back into bed shortly after midnight, I was a much different person than the one who had taken an uncomfortable nap earlier in the evening. At this point, without being controlled by needless fear, I knew that nothing was going to stop me from diving into every aspect of Turkish culture and loving every minute of it, regardless of the outcome.

The adventure had officially begun…