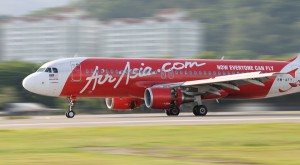 This is a new idea that came to me while flying from Syria to Thailand a few months ago upon completing my recent set of rewarding Middle East travels. Given that I’ve been spending so much time flying all over the planet as of late (25 flights in the past 5 months), I decided to start sharing summaries of my ‘travel days’, days in which I travel from one destination to another by air. The idea is to not only tell the tale, but to hopefully share any tips or lessons that I learn along the way that might prove useful to other travelers making a similar journey.

The taxi ride from the city center to the airport took about 30 minutes, and Rawiz, my taxi driver, gave me a most interesting farewell to this country where I had spent much of the previous two months. Rawiz spoke to me about the Jewish population of Damascus and before long, I received what has to be the most comprehensive summary on the matter. (The short story is that there is still a small Jewish community in the city, even though most of the Syrian Jews immigrated to the United States when the Syrian government lifted restrictions on their movements about 6 years ago. According to Rawiz, Muslims and Jews get along quite well in Damascus and he claimed to have several Jewish friends himself.)

Arriving one and a half hours before your flight out of Damascus is more than sufficient no matter where you happen to be flying. To put it simply, the airport is tiny. Only ten minutes passed from the moment I walked through the doors of the airport until the moment I sat down at the gate. There was not a single person in line at the check-in counters, security or immigration.

And so, with seventy-five minutes to kill, I wandered around the departure terminal (which took exactly 4 minutes) and then plopped down in a chair for some good old people watching until it was time to board the plane.

All you’ll find inside the terminal building of this airport are a handful of souvenir shops and one stall selling bottled water, soda, nuts and chips.

Gulf Air, the principal airline of the Kingdom of Bahrain, often offers cheap long-haul flights to many destinations around the world and their website is always worth a look if you’re headed anywhere that requires you to pass over the Middle East. The only potential issue is that many of their flights involve long layovers in Bahrain and unless you obtain a visa ahead of time, most nationalities won’t be allowed to leave the airport. But apart from that, I’ve found Gulf Air to be a good value airline and have now used them on several occasions. 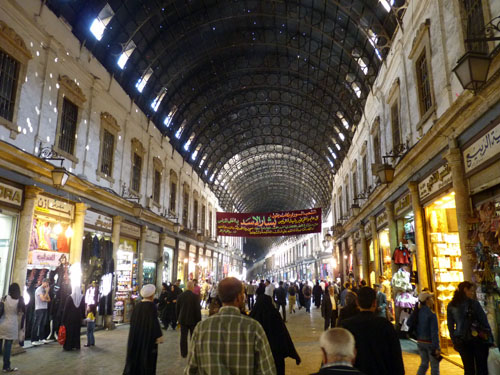 Luckily, my layover in Bahrain was only 5 hours this time around and with free Wi-Fi offered throughout the airport, the time passed quite quickly. (Plug outlets are difficult to find but are located in the corners of most gates, right next to the internet computer stations.)

Apart from getting some work accomplished, I also had a quick chat with a Filipino guy who was on his way to Riyadh, where he worked as a construction laborer. Interestingly enough, he had also spent time working on board cruise ships as a cabin steward when he was younger and so we both reminisced for a while about life at sea.

When the time arrived for me to board my flight to Bangkok, I must admit that the sound of Thai voices and the sight of Thai people that greeted me on that Airbus-320 had such a calming effect on me. Only minutes after sitting down in my seat, I found myself engaged in a friendly chat with the bubbly Thai guy next to me. This was perhaps one of the happiest planes I’ve ever been on, with widely smiling people everywhere I looked.

Of course, the conversations died down for a minute when the Bahraini woman in front of me chugged two beers, a glass of whiskey and three cups of red wine in the first hour and a half of the flight and then became violently ill while her husband informed the concerned Thai stewardess that his wife had never drunk alcohol before in her entire life. This was not a pleasant scene but before long, the overall positive mood of the flight returned. Such is the power of the Thai smile.

And six hours later we arrived in Bangkok.

After passing through Thailand’s efficient immigration lines, I had 3 hours to spare before my flight to Chiang Mai. So I headed straight for the domestic terminal where I simply walked up and down the huge departure wing for over an hour in order to stretch my legs. I thought about turning on my laptop but I learned that while the airport does have Wi-Fi, you need to obtain an access code from one of the Information Desks and this only entitles you to 15 minutes of free internet. Each gate also has free Internet Kiosks but I’ve always been quite wary of using such kiosks after reading this interesting post over at FoxNomad.com.

I also withdrew some Thai Baht from the ATM while waiting for my flight, and was surprised to discover that all ATMs in Thailand now charge a fee of 150 Baht ($5 USD) per transaction. So it definitely pays to take out a decent amount of money the first time or else those extra fees will start to add up quite quickly.

Suvarnabhumi Airport also offers a huge variety of cafes and restaurants (most of which are open nearly 24 hours per day) and an abundance of comfortable seats and benches to relax in. The airport is also quite well-organized, with official, and typically friendly, Information Desks located everywhere and clearly marked with blue and white signs. 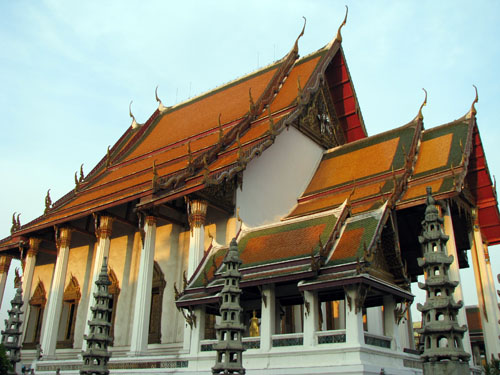 While AirAsia offers what may appear to be absurdly cheap fares to various destinations around Asia/Australia, there are a lot of extra fees involved depending on how much luggage you carry, if you want to choose your seat and even to use a credit card to book your ticket. In the end, the price of my Bangkok to Chiang Mai flight was only $8 USD cheaper than a flight with Thai Airways (a wonderful airline!), so AirAsia might not always be worth it. I ended up using Air Asia because Thai Airways didn’t have a flight that fit my schedule, otherwise, I would have gladly paid the extra $8 USD.

One thing I noticed this time upon arrival at the Chiang Mai airport is that there is a kiosk located right next to the luggage carousel where foreign visitors can receive a free SIM card for their phone. You can’t miss the kiosks as they’re bright yellow with a sign that says “AOT” and I definitely recommend taking advantage of this offer. It takes only a minute to sign up and once you have your free SIM card, all you need to do is add some credit (which can be done at any 7-11 shop, of which there are dozens in Chiang Mai) and you’re ready to make phone calls. While it may not sound like such a big deal, this offer will save you about 200-300 Baht (the normal cost of a SIM card) as well as the potential hassle of having to get your phone set up once you get into the city.

When leaving the airport in Chiang Mai, I recommend heading straight for the exit doors at the far left end of the arrival hall. Immediately outside you’ll see another kiosk with a sign that says “120 Baht Taxi”. Simply tell the staff at the kiosk the name of your booked hotel in Chiang Mai and they’ll immediately assign you a taxi. Once you reach your destination, you pay the driver 120 Baht ($4 USD) and that’s all there is to it.

So on December 12th, I eventually reached my final destination, a small guesthouse down a small lane in the middle of the Old City of Chiang Mai. It was quite a smooth, enjoyable journey in the end as I managed to get some work done, sleep a decent amount, watch a couple of crappy movies and meet some interesting people along the way.

And I don’t know about you, but whenever my final destination is home to mango and sticky rice, I’m one mighty happy traveler.