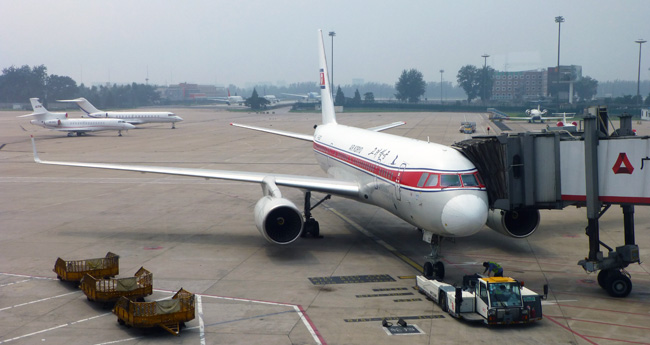 There was a time when I didn’t enjoy flying at all. In fact, it wasn’t too long ago that I wrote a post about that very subject, reaching the conclusion that the older I was getting, the more afraid I was of flying. It turns out I was wrong though. It was only a temporary bout of flying fear that had gotten a hold of me. Last week I was flying through the air at 38,000 feet, from Europe to the US, and I had a groovy time, no worries at all. I didn’t exactly want to stay inside that plane for another 8 hours of course, but that had more to do with KLM’s lack of a decent entertainment program than it did with being high up in the sky in a moving metal object that was occasionally passing through some turbulence.

And it’s a good thing that I’ve been okay with flying for the overwhelming majority of my life. A few months ago, during a flight from New York City to Frankfurt, Germany, I decided to try and calculate the exact number of flights I’ve been on. I reached 336 before I couldn’t remember any more. That’s a lot of flying.

Not only did I fly to the US a few days ago, I’ll also be taking two flights while in the US, then I’ll be off to India. After six weeks in India, off I’ll fly once again, this time to Florida in order to visit some family before returning to Romania just before the end of the year. For 2013 I’ll have averaged 4.5 flights per month by the time New Year’s Eve comes around.

Isn’t all of this flying expensive? It could be but it doesn’t have to be. The key is flexibility. If you’re flexible with dates, and even destinations, the chances are high that you can move the numbers/places around until you eventually find a flight that will take you to the general region you want to visit, for a price that seems very reasonable. Of course, another key is not taking 4.5 flights per month. It would obviously be far cheaper to fly to a certain country and then travel overland around that country and to neighboring countries, without stepping foot on a plane. A local bus or train is almost always going to cost far less than a flight.

However, there are times when you just need to fly and when those times present themselves, it also helps to experiment with different airfare search engines. I’ve definitely done my fair share of experimenting over the years and I’ve tried out dozens of sites, some that impressed me and others that made me wonder how on earth they even became popular at all. I’d actually be interested to know how many hours I’ve spent researching fares on airfare search engines during my life. My guess is that the answer would be quite depressing.

Luckily, right now, I seemed to have find my ideal website and therefore, I don’t do as much experimenting anymore. As I mentioned a few weeks ago, I’m completely hooked on Vayama.com these days simply because, for the flights I’ve needed over the past twelve months, they have consistently provided a combination of the lowest fares and the most attractive routes. They are particularly good for lengthy, inter-continental routes, most of which my flights happen to be, and as a result, I’m not spending nearly as much on flights as one might think, despite all of this criss-crossing the globe.

As an example, using Vayama.com, I’ll have flown from Bucharest, Romania to NYC to Delhi to Istanbul to Fort Lauderdale, Florida over a period of two months for a total of $1800 USD. Four long flights that will take me all over the planet for that amount seems like as good of a deal as one could possibly find, which is why I definitely recommend adding them to your list of search engines to try out.

Many people have asked what programs I use for frequent flyer points and how I work the system, as this is surely another way to save money on flights. And while I’m not a ‘frequent flyer hacker’ kind of person, here’s what I do:

Star Alliance & SkyTeam – These are the two airline alliances that I use almost exclusively in order to make sure that I am constantly earning points that I can eventually use for free flights. Between the two, there is a wide variety of airlines to choose from so the chances are high that the lowest fare I find for a particular route will be on an airline that is part of one of these two groups. And then, for every mile I fly, I earn a point that, upon earning enough of these points, I can redeem for a free flight or an upgrade.

Jet Blue – This is the only airline I’ll use while in the US in order to fly to various cities to visit family and friends. As a result, I’m also signed up to their TrueBlue award program and I have a Jet Blue credit card as well. I only use this credit card to purchase Jet Blue flights because they offer a large points bonus for doing so. In my experience, there is no other program that makes it so easy to earn free flights. Book a couple of tickets, pay with the Jet Blue credit card and you’ll already be quite close to a free trip.

Airline Credit Cards – Up until last year, I had a couple of other credit cards that were tied to particular airlines. I had a United MileagePlus credit card and a Delta SkyMiles credit card. This way, all of the purchases I made would immediately give me extra miles as I was earning anywhere from 1 – 3 miles per dollar I spent. The more I spent on my cards, the more miles I earned and the quicker I had free flights with those airlines and their partners. However, the problem was that ‘free flights’ started becoming quite expensive. The taxes and fees that one must pay these days on the free flights earned through points can be absurd at times. Sometimes the taxes and fees charged are almost as much as just buying a normal ticket for that route. So in my opinion, it became less and less useful to rack up these miles when, in order to benefit from them, I still had to shell out a good amount of cash to cover those fees.

Bank of America Credit Card – This is what I now switched to and it’s based on a points system. I gain points for the dollars I spend and when I’m ready to cash those points in, they can be used as a statement credit for any travel-related purchases. So if I have $300 USD worth of points, I can just find a charge for a flight or accommodation booking that I had made and apply the credit. And the best part about this credit card is that when I do redeem my points, I receive a 50% bonus. That means that when I’m ready to use that $300 credit, I actually get $450 to redeem instead. To me, this is a far better deal than the airline credit cards I was using in the past.

That’s really all I use. I prefer to keep it simple – two airline networks, one main credit card, one other credit card. So far, this has worked very well in helping me earn a free flight here and there. And while the whole airline miles credit card setup isn’t as equally accessible to everybody (depending on your country), at the very minimum, all travelers should sign up to the frequent flyer programs for one or two of the major alliances. Every flight you take should earn you some kind of miles or points.

How do you try to save money on flights? Have you used Vayama.com before? Any questions about frequent flyer programs?