Two Days In Beijing & Where I’m Going Next!

Two Days In Beijing & Where I’m Going Next! 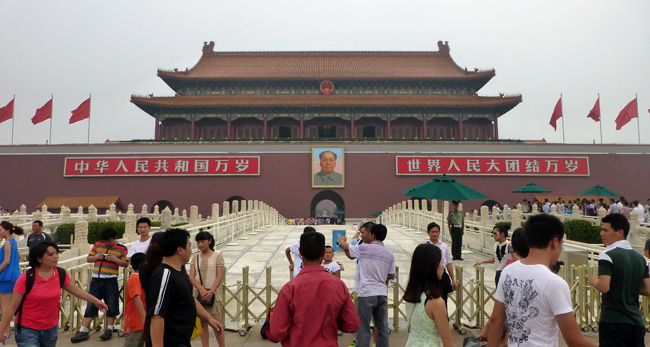 While I knew that I would be back in Bucharest on August 18th, just nine days after leaving Ukraine, my flight out of Kiev this past Saturday took me to a destination far, far away from Romania. It was going to be a busy week.

First, I landed at Moscow’s Sheremetyevo Airport where I enjoyed a relatively comfortable five-hour layover before boarding Aeroflot SU200 at 1:00pm, a direct seven and a half hour flight to Beijing’s Capital Airport.

The flight was uneventful and involved mostly sleep as I tried to fight off the remaining remnants of the illness I had been battling for a week in Ukraine. And somehow I managed to sleep for most of the flight, which left me feeling quite good as I stepped off the plane and into mainland China for the very first time.

Immigration was quick as I asked for, and instantly received, the “72 hour transit visa” that citizens of 45 countries are now able to obtain upon arrival in Beijing and Shanghai. A few minutes later, at around 1:30am, I found myself standing outside breathing in the heavy Beijing air that I had heard so much about, before I jumped into a taxi.

After twenty minutes, and because I had already done some research on places to stay in Beijing, I arrived in the Santilun district of the city, checked into my hostel and went straight to sleep.

For the past two days in Beijing, I have wandered around the city as much as possible. I have visited the Forbidden City and Tiananmen Square, I have become lost in the hutongs (lanes and alleys that make up certain neighborhoods) and I have checked out a few palaces and markets and random neighborhoods as well. It’s been a quick visit but a decent introduction to this country, a country that I have openly stated is last on my list of countries I have a desire to really travel around (more on this in a minute).

My initial reaction to Beijing probably won’t surprise anyone. It’s polluted. I’ve actually yet to see the sky during my stay, or at least any blue sky. The city has remained covered in a depressing light brown layer of smog the entire time.

The streets seem to be mostly wide avenues that create massive city blocks, so as you walk around you don’t feel as if you are in the ‘downtown’ of a city of 20,000,000 inhabitants. It’s just huge block after huge block, where you walk on wide footpaths and must cross many major intersections. Speaking of walking around Beijing…doing so in August is absolutely exhausting with this heat and humidity. I’ve been drenched in sweat about 80% of the time I’ve been here!

The people I’ve encountered during my wanderings have been friendly, if not a little sneaky and dishonest, and more people speak English than I was expecting. The food I’ve eaten – ranging from noodle soup to roast duck to other random dishes that I randomly chose from the photos on the restaurant menus and don’t really know what they consisted of – has been decent. The prices are about average, nothing that I would classify as very cheap but it’s not too expensive either (hostel room – $15 USD / meal – $6 USD / metro ride – 33 US cents).

With that said, you do have to watch out when spending money as even the staff in the hostel try their hardest to get some extra money from you as often as possible. People will make up anything in order to convince you to part with your money right away. While I was standing outside of a restaurant trying to decide whether or not to enter, a waiter came outside and told me that I should come inside because they had their best dish ready and they were closing in twenty minutes. I didn’t enter in the end but about two hours later I walked by again and they were still open. So, don’t take anything too seriously over here and from what I’ve heard, you usually have to haggle for just about everything.

As for the ‘sights’, the history of the Forbidden City and the Ming and Qing Dynasties is interesting but seeing the actual Forbidden City now was quite underwhelming. I would probably say the same about most of the temples and palaces I’ve visited. Getting lost in the markets and hutongs was definitely more exciting to me.

While I’ve had a good time over the past two days, and despite knowing full well that two days doesn’t even give me a tiny, tiny, tiny speck of an idea of what this city or country is all about, I must say, though, that my short stay did not exactly change my original thoughts. I still don’t have much of a desire to visit more of this country and I can’t see myself adding it to my travel itinerary any time soon.

I know some of you love traveling, or even living, in China and many of you will tell me I’m crazy and that I should definitely spend more time here. And while I’m happy that your experiences in this country were so positive and while I understand that there certainly is no shortage of places to explore in this vast land, again, it just doesn’t appeal to me much. Not sure why exactly, that’s just how it goes.

Where I’m Going Next…

Anyway, I won’t have a chance to experience more of this country this time around. That’s because, early tomorrow morning, I’ll board a flight that leaves Beijing for…

That’s right! The idea to visit North Korea came into my head about six weeks ago and while it is true that you can only visit this country on an organized tour, I thought it would be quite interesting nonetheless. An opportunity then arose to join such a trip and that was that. I’m heading over there for five days and after the orientation meeting last night with the group, I’m even more excited about the upcoming experience. I’ll even have a chance to witness the Mass Games during my stay. I know that traveling to North Korea can be a controversial topic but I’ll be writing more about this, as well as the details from my trip, once it’s all over and I’m back in Bucharest.

Until then, I hope you all have a great week everyone!

**I won’t have internet at all during my five-day stay in North Korea so I will reply to all comments and emails and catch up on Facebook and Twitter once I am back out on the 18th.

How was your experience in Beijing? Or do you have any interest in visiting Beijing, China in general and/or North Korea?