My Mexican Neighborhood Teaches Me About Making Judgments

My Mexican Neighborhood Teaches Me About Making Judgments 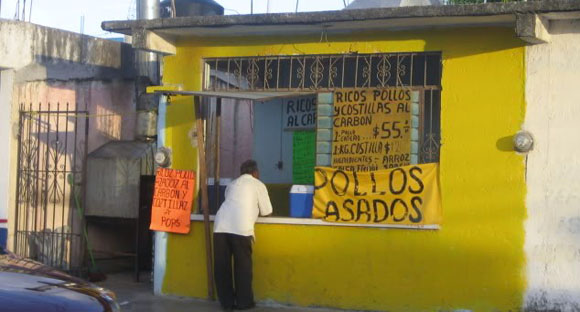 A white, rusty, beat-up, early 1980s pickup truck came to a screeching halt only seconds after driving right by me. And as I stood on the side of the road, my heart began to beat a little faster as the truck shifted into reverse and backed up at a frighteningly fast speed. Again, the tires screeched, this time as the truck stopped right in front of me.

The driver, a large man with a torn and dirtied t-shirt, and a serious, angry-looking face, remained in his seat while the passenger, an even larger man with a ripped t-shirt and lack of any expression resembling a smile, jumped out of the truck and approached me. Without a word he pointed at himself, continuously tapping his own chest as if trying to emphasize that I somehow had done him some harm. He then stretched both of his arms towards me, and without giving me any other option, grabbed the spare tire and wrench out of my hands.

He then jacked up the car, replaced my blown-out tire with the spare, handed me back the equipment, refused to take some money that I tried to offer him and then climbed into the truck and sped off again with his friend.

That’s the kind of neighborhood I live in.

If you were to visit me (and the invitation is always open!), I’m certain that after a few moments, you would repeat the same words that all of my friends and family who have either visited or seen the photos, have spoken: “Oh…hmmm…so this is where you live? This is what you came to Mexico to experience?”

But I wish you could be sitting here next to me right now.

I’m sitting on my small balcony. To my left is a view of the turquoise Caribbean Sea (the view in the photo above), straight in front of me is a large patch of dry jungle and to my right extends my neighborhood. Two elderly men are sitting on the curb a few buildings down, playing guitar and singing for nobody but themselves. A group of children are playing soccer in the street, smiling Mexican families are walking by on their way to the beach and a flock of parrots are providing some beautiful back up music to the two old men. The sun is shining and the air is warm.

As I sit here looking around at my surroundings, I’m happy to be living in such a place.

MAKING QUICK JUDGMENTS IS MORE COMMON THAN I THOUGHT

Truthfully, had this been several years ago, I would have immediately decided against moving to this neighborhood after seeing it for the first time. Driving past one cinder block hut with chickens running around the front yard would have been enough to make me want to live elsewhere.

While I was thinking about all of this today, it occurred to me how many times over the years I’ve allowed myself to formulate an instantly negative opinion about a certain place or even group of people without ever really getting to know them.

I’m sure, in fact I know, there must be hundreds of times. The more I think about it, the more I realize how many times, even per day, that I make rash judgments based upon insufficient knowledge.

For example, only a few hours ago I went shopping for food and decided to go to a supermarket that I’d never been to before. As soon as I walked in and noticed the concrete floors, unorganized layout of the aisles and piles of empty cardboard boxes scattered along the walls, I said to myself, “This place is terrible. Coming here was a mistake.”

But not wanting to head across town to a different supermarket, I stayed and did my shopping. Thirty minutes later, as I handed over my money to the cashier, I was thrilled as I could not believe how much food I had purchased for approximately 30% less the cost than had I gone to my regular supermarket. Now, I’ll definitely be coming back to this new place every week.

Of course, making a judgment about a supermarket is a relatively innocent and harmless situation. But I fear that I’ve made those same quick judgments about towns, cities, countries and even groups of people, more regularly than I’d probably care to admit. And when this happens, I am denying myself an opportunity to learn, because the desire to learn is greatly diminished as soon as we’ve made up our minds about something.

I’m also doing a great injustice to those who fall under my unwarranted generalizations – the people whose country I’ve suddenly labeled “boring”, “dangerous”, “not worth a visit” or “full of lazy people” after having passed through the airport or spending two nights there en route to someplace else.

(This is the reason for my general dislike of certain guidebooks, mostly those that seem to do a mighty fine job at helping people form opinions about places before ever even visiting them. But that’s an entirely different post!)

I’m not trying to say that all initial judgments and generalizations are negative and all future realizations are positive. But to me, the important aspect is not what those perspectives actually are, but how we arrive at them.

Did we see one police car zooming down the street with lights flashing and declare a place dangerous?

Did we hear a story from an Australian guy that taught primary school in Dubai about the rude and hateful parents he had to deal with and then declare the United Arab Emirates to be a terrible place? (Yes, it was during my earlier years of travel!)

Or did we interact with the people ourselves and get to know the culture and lifestyle as much as we possibly could?

Here in my current neighborhood, I would have maintained my initial apprehension had I not ventured out and interacted with the woman who owns the laundromat (as a customer, keep it clean!), the family who runs the local breakfast eatery or the staff at the 24-hour shop who take care of my late-night chocolate urges.

And now, I’ve been happily living here for two months and have nothing but positive things to say about this neighborhood, its people, the businesses that operate here and even the transvestite prostitute that hangs out a few blocks away (it’s not what you think – s/he just gives me a friendly ‘hola’ and doesn’t hassle me anymore when I walk past).

Initial judgments should be treated as thoughts to be built upon and crafted, not as absolute truths. When it comes to traveling, who are we, as outsiders, as travelers passing through, to categorize, classify or stereotype a place and its inhabitants?

I know that I’m going to start making an even more dedicated effort, not to avoid having initial reactions, this is a part of being human, but to avoid mistaking those reactions for ultimate conclusions.

Do you often find yourself making quick judgments and then being proven wrong? Are there places you won’t visit simply because of some small thing you heard or read?