When I decided to start my trip to the Balkans with a ten day vacation from the blog, I began searching for an ideal beach town in Montenegro where I could do nothing but relax. At the time, I admittedly knew very little about Montenegro and as I did some research, I found it quite difficult to determine which of the many towns along its coast would make for the perfect destination.

After considering Herceg Novi, Budva, Petrovac, Bar and Sutomore, I finally chose the one location that I had trouble finding any information about at all. So, I booked an apartment in the town of Ulcinj, located just 40kms from the border with Albania, in a region of the country that seemed to receive far fewer visitors than the towns farther to the north.

Then, upon arrival in Montenegro last week, and with no real knowledge of what to expect, I hopped on a bus from the capital city of Podgorica and just hoped for the best.

And oh how lucky was I!

Not only was this town exactly what I was looking for – small, picturesque, laid-back, full of beaches – my vacation in Ulcinj turned out to be far better than anything I could have ever expected.

The Town Of Ulcinj

It’s a small town for sure, with one wide avenue of supermarkets, simple shops, restaurants and a market that suddenly turns into a small road as it curves toward the coast and straight through a narrow valley that leads down to the main beach and the historical fortified Stari Grad (Old City).

You can enter the gates of the tiny Old City via a short climb, either by road or steps, allowing you to explore it’s cobblestone streets and medieval buildings while taking in the view provided by it’s interesting location atop a piece of land that juts out from the coast into the Adriatic Sea.

Back down below the Old City, the main tourist strip behind the beach has the normal collection of pizzerias, shops selling towels and swimsuits and dozens of ice cream stands. But at the same time, the scale of this tourist strip was so small in comparison to what you might expect when you think of a tourist town that it was able to maintain it’s relaxed, local atmosphere. This was not an overwhelming tourist scene at all and was instead, quite pleasant to walk around.

Apart from these areas, the rest of town was situated on the sides and tops of several large hills that dotted the coastline, which not only made for some impressive scenery, but acted as the most ideal location for many of the residential neighborhoods. In fact, the apartment I rented was located at the top of one of these hills, something that allowed me to enjoy this evening view every day… 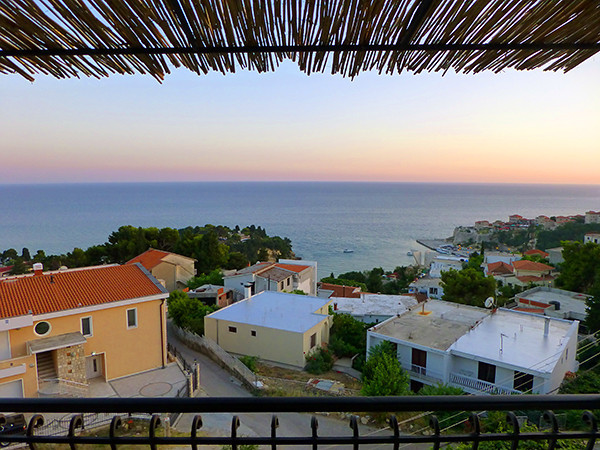 The Beaches of Ulcinj

The main beach was simple and incredibly overcrowded. The view of the Old City from the sand was wonderful, but the water was quite dirty, as was the beach itself, littered with empty Coca-Cola bottles and bags of junk food carelessly tossed away by beach-goers. I’m actually not too sure I’d ever been on such a crowded, dirty beach before and after one afternoon squeezed in between so many other people and trying not step on garbage, I decided to try a different beach the next day.

The 13km stretch of beach known as Veliko Plaza is about a 10-minute drive outside of the center of Ulcinj and this is where you will find private beach clubs, all of which have names such as “Copacabana” and “Miami Beach” and charge about 6 Euros for two beach chairs and an umbrella. I chose Miami Beach and with a restaurant and bathroom facilities on the premises, as well as a dozen staff members constantly cleaning the beach, this was a major improvement from the day before. And even though this beach probably had the same number of people as the main beach in town, it was so well-organized that it didn’t feel nearly as crowded.

I ended up at Miami Beach two days in a row, and while I was prepared to return to Miami Beach for a third day, I had noticed another small beach near the Old City during a short walk I took one evening. This beach was hidden at the bottom of a hill and despite being a rocky beach without any sand at all, it seemed so appealing simply because there were so few people there and the water was so clean and clear.

Sure enough, Liman Beach turned out to be my favorite of them all and had I found it on the first day of my vacation in Ulcinj, I probably would have gone here every single day. Tiny, with cheap umbrellas for rent, such beautiful water (which also seemed much warmer than the water at every other beach), a convenient snack/drink bar and excellent views of the Old City, this was my kind of beach. 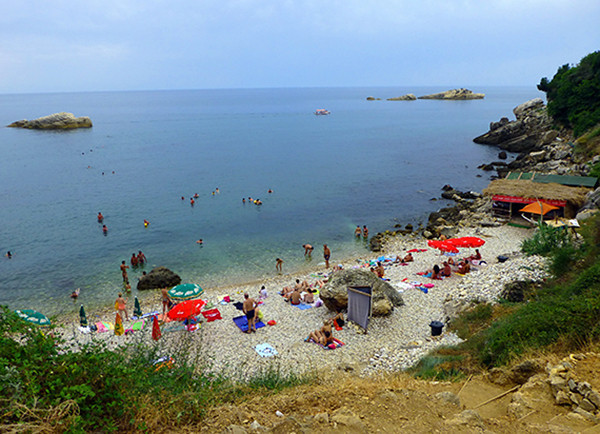 And during the two days I spent on Liman Beach, swimming around and laying in the sun, I finally reached that point of relaxation that I had hoped this vacation would bring me.

The People of Ulcinj

The local population of 11,000 residents, of which 70% are Albanians, are quite laid-back and friendly, just as one would expect from those who live in a beach community. And despite having a mix of religions, ranging from the majority Muslims to Orthodox to Catholic to the three Buddhists who live in town, everyone lived in harmony according to the locals I spoke with.

In addition, crime is apparently non-existent here and it’s one of those destinations where you could ask anyone in the street for assistance and basically be guaranteed of a helpful, generous response.

As for the other tourists in town, they were made up mostly of Bosnians, Serbians and Kosovans, as Ulcinj is clearly a tourist destination for those from other Balkan countries. And while English is spoken by most of the people working in the tourism industry, I almost never heard it being used considering that the overwhelming majority of tourists here could communicate in either Albanian or Montenegrin, the two languages most widely used in Ulcinj.

And that was perfectly fine with me. All I wanted was to find a place where I could quiet my mind, get a tan, eat some good food and talk to some nice people.

That’s what I did during my vacation in Ulcinj and I loved it. And in case you can’t tell from the simplicity of this post, I am currently about as relaxed as I have ever been at any time during the past three years, which is exactly why, the next time I decide to find a quiet beach community to spend a month or so living in, Ulcinj will definitely be on my final list of options.

Does Ulcinj sound like your kind of place? Are there any other quiet, non-traditional vacation destinations you’ve discovered or want to visit?