A Moment’s Loss of Faith in Humanity

A Moment’s Loss of Faith in Humanity

This is a tale about my day today. While at this very moment I am able to laugh about the day’s events, I cannot say that this was the case earlier.

Actually, far from laughing, I found my legs shaking, my heart beating fast, my arms and chest tensing up and my ears burning as I was stricken with an overall feeling of hopelessness.

And it all began with trying to pay a credit card bill.

Of course, when we arrived, the woman behind the counter informed us that such a transaction was not possible.

We then walked across the street to the Banamex Bank, only to be told once again that we could pay every kind of credit card, except American Express.

Over the following three hours, we proceeded to visit three more banks and an American Express office, where we waited for a total of two hours in line, only to be informed each time that our transaction could not be processed for one inexplicable reason or another.

But eventually, after being forced to close our eyes and take deep breaths on several occasions, we managed to get the situation in order…sort of.

With an air of triumph, we walked out of the fifth bank of the day with all of the money we needed stuffed into my friend’s purse. All we had to do now was drive two miles down the road back to the American Express office, hand over the money and be on our way.

THAT WOULD HAVE BEEN TOO EASY! 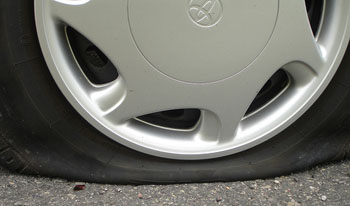 Just one block from the American Express office, we got a flat tire.

We then pulled over to the side of the road and began to assess the situation. Not the most skilled tire-changers in the world, my friend and I spent about two minutes crouched down next to the rear right tire, trying to figure out how to remove the oddly-shaped bolts.

Once we eventually figured out what needed to be done, I suggested to my friend that she head over to the American Express office while I changed the tire. She walked around the car, opened the driver’s side door and…her purse was gone.

Before getting out of the car, she had placed it on the driver’s seat and now it simply wasn’t there. Somebody had opened the door while we were on the ground trying to set up the car jack, grabbed the purse and taken off without us seeing anything. I know it sounds absurd, but it’s the only possibility. With that purse went about $1000 USD, a driver’s license, a passport, every ATM and credit card, the keys to the apartment and a cell phone.

Somewhat distraught and disappointed in humanity, the both of us just sat on the curb for a while, unable and unwilling to move.

After about twenty minutes, I suddenly decided to take off and I began running like a madman all around the streets within a three-block radius, hoping to find some guy sitting behind a bush counting dollar bills. Of course I found nothing.

It’s true, losing $1000 was not the problem as it simply isn’t about the money. Nor is it about the credit cards or the passport or the driver’s license, even though it will now take my friend at least three months to recover those documents given the slow speed of such processes in Mexico.

In the end, it’s about people and what kind of person would do such a thing?

Today’s events honestly made me sad. I simply can’t comprehend such an act and so when it happened right before my eyes, I was at an absolute loss of words. As we drove back to the apartment after this incident, my legs were literally shaking so badly and I felt so nauseous that I could barely concentrate. I ended up driving 25 mph the entire way home.

In all the craziness, I even contemplated putting this blog on hold as I began to lose faith in my long-held belief that people are inherently good. And since my entire mission as a global wanderer is based upon that concept, finding the motivation to write another blog post would have been a most difficult challenge.

ALL I NEEDED WERE SOME QUESADILLAS

I should continue believing that, right?

Today was just a disappointing day, a minor setback.

Just this very moment, and I swear I’m telling the truth, we received a phone call from someone telling us that they have the purse! A girl named Diana found it hanging around a public payphone and after a quick search through the pockets, she discovered a bank receipt with our apartment phone number written on it. Apparently everything is still inside the purse except for the money.

Pardon me while I step away from my laptop for a few minutes of celebratory dancing!  Could it be that this one phone call has officially restored my faith in human beings?

On a side note, I’m a bit confused about what I should think of the person who stole the purse in the first place. Is placing the purse in such a public area, clearly intent on having it found, considered to be an act of kindness? Is it required by some bizarre thieves code of conduct down here?

Well, who cares! Human beings seem to be decent once again and I’m about to have a peaceful night’s sleep.

What do you think? Are people inherently good? Have you ever been forced to seriously question this belief?