Upon arrival in the southern Kurdistan city of Sulamainiyah, Anil and I instantly found ourselves giddy with joy upon discovering two Chinese restaurants in the vicinity of our hotel. After all, up until that point, the only food we’d eaten were chicken and falafel sandwiches, not because of an abnormal love for such food, but because that was all we could find in other parts of the region.

So as soon as evening approached and our hunger grew, we eagerly wandered over to the larger of the two Chinese restaurants we’d seen and prepared ourselves for a much needed feast of yummy Asian cuisine.

Of course, had we taken a few minutes to properly think this plan through, we might have paused before deciding to enter this second floor restaurant. Truthfully, the sign out front prohibiting us from entering the establishment with any guns or knives should have acted as a clear indication that this was not your typical “lo mein-fortune cookie-free green tea” type of Chinese eatery.

And I’m not sure about your friendly neighborhood Chinese restaurants, but the ones I frequented when I was younger and living in the United States, did not require me to be thoroughly frisked by a large, leather jacket-clad man upon walking through the door. Luckily, Anil and I had both decided at the last minute to leave our AK-47s and machetes in our hotel room and so we both passed the security check, after which we wandered over to a table near the windows.

And as we sat down, the first thing that we noticed, as if this shouldn’t have occurred to us before, was that the Great Shang Hai Chinese Restaurant was one seedy establishment. Not only were we the only customers, but it was eerily dark inside, with only flashing fairy lights on the walls, which created an atmosphere that more closely resembled a brothel in the backstreets of Mumbai (from what I’ve seen in films of course).

Regardless of our observations, we were willing to put this sketchiness aside and concentrate on satisfying our hunger with some Chinese food.

But when the waitress, a young Chinese woman, approached our table, we were quite surprised to find ourselves in the midst of a conversation that went something like this:

Waitress: She says something in Kurdish
Us: We stare blankly at her

She then walked away and returned with a menu, although given her reaction above and the dusty state of the menu, it was quite clear that this Chinese restaurant was not exactly accustomed to serving Chinese food. In fact, we might very well have been the first people to ever request a menu.

And when we did read through the menu, the expensive prices listed next to each item finally forced us to change our minds about sampling the local Chinese cuisine.

However, at this point, we were quite fascinated by our surroundings and wanted to learn more about what was going on in this joint and so we handed the menu back to the waitress and ordered drinks instead. We figured one drink would be reasonable before taking off once again in search of some food. 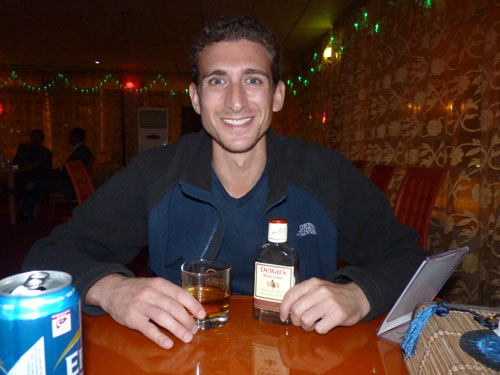 Little did we know that the beer Anil ordered would be of the “abnormally large can” variety nor that when I asked for a “whiskey”, I was ordering an actual bottle (albeit a small one) of the stuff and not just one glass. As a result, one quick drink turned into a 2.5 hour session as we sat there in the Great Shang Hai watching the place fill up with other men who also ordered nothing but drinks. And the entire time, Anil and I debated back and forth as we tried to make sense of what was really happening in this peculiar place.

It could have very well just been a bar, but after watching some of the patrons slip wads of Iraqi Dinars into the hands of one of the waitresses and then proceed to beg the bartender to allow the waitress to sit at their table with them (such requests were always refused), I began to think otherwise.

Here’s a short video to give you a better idea of the fascinating restaurant that is the Great Shang Hai:


Somewhat reluctantly, after finishing our drinks (yes, I finished the bottle of whiskey and Anil finished off two large beers), we decided to leave due to the fact that we were now beyond hungry at this point.

And when our bill arrived, it was remarkably cheap, perhaps an indication that this wasn’t a brothel or underworld hangout after all. Usually at such places (again, so I’ve heard), you can’t drink the amount we did for a mere 10,000 Iraqi Dinars ($8.50 USD).

GIVE ME SOME FOOD!

Ten minutes after leaving the Great Shang Hai, we stumbled into a restaurant called “Pizza Plus”, which we were not surprised to discover actually specialized in sandwiches. Although, my eyes did nearly bulge out of their sockets and drool did begin to drip from my mouth upon noticing an assortment of fresh salads as well.

But naturally, since this was Iraq, not even a simple meal of sandwiches and salad could take place without something interesting happening. This time it was the man behind the counter who served us the food, a young Kurdish fellow who informed us that he now lives in Norway. And upon hearing that this young chap lives in Norway, we then asked him why he was back in Kurdistan.

His answer was quick and to the point, although somewhat confusing: “I come back to Kurdistan for money and sexy, sexy!”

Enough said. We sat down at our table and shoveled our food into our mouths in silence.

THE FINAL STOP OF THE NIGHT 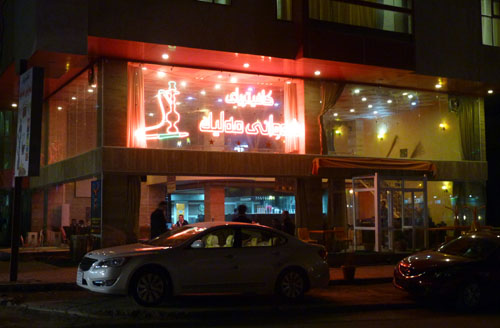 With bellies full, and the night still young, Anil and I decided to pay a visit to what appeared to be the most popular night time hangout in all of Sulaimainiyah – the Shawany Maliek Cafeteria.

We stumbled inside this crowded, two-level shisha cafe and grabbed two large, comfortable chairs in the corner. And before long, there we sat, taking turns blowing smoke high into the air as we shook our heads in disbelief at the day’s events. (The day began with our encounter with the US Marine who was shocked by our presence in the region.)

In the end, we sat in this cafe for over three hours, simply too content to move. 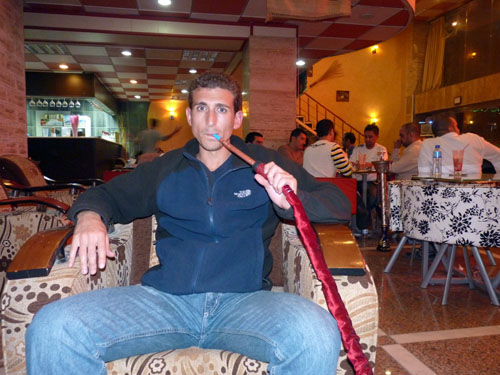 When we finally walked back to the hotel just before midnight, both Anil and I were in agreement that this day ranked quite high in terms of memorable travel days we’d each experienced. And perhaps that’s hard to believe, as I don’t know, maybe it sounds like an unexciting or even dumb story when read here.

So if that’s the case, then I guess next time you’ll just have to join me and experience it for yourself, which you’ll actually have an opportunity to do once I announce, within the next few weeks, the new project I’m working on 🙂