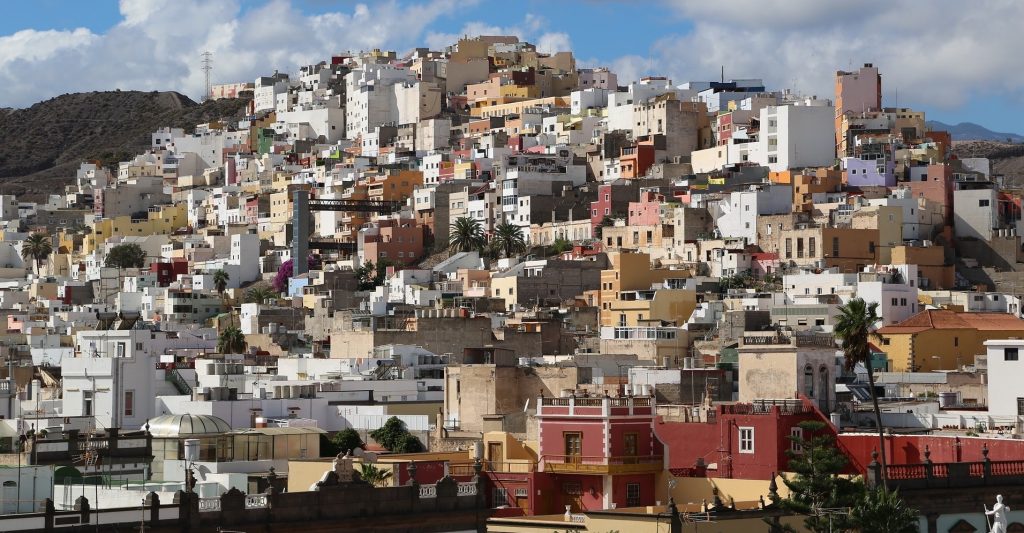 On the wall is some graffiti that I can’t make much sense of. I think there are small round robots buzzing about, working on computers and talking on the phone. The table where I sit is long and white. There are four of us sitting here, laptops open, yet eight seats still remain empty. Inside this space it feels modern and industrial, yet welcoming enough, with wires hanging form the ceiling, a minimalist design and a front door that opens with the use of an app.

Outside plastered on the wall across the street is an advertisement for rum, next to a brown door that leads to a currently closed nightclub. In front of the wall and the door stands a tall green parking meter on the sidewalk.

How did I end up here in the Canary Islands? I hear a coffee machine rumble in the back of the room. There is a small yellow wooden duck on wheels only inches from my laptop, its black dot of an eye staring me down since I got here. It is the duck that won’t stop asking me how I ended up here. A middle-aged man with a worn out backpack, holding in his hand a salad in a plastic container, straight from the supermarket, just walked in to the room and sat down across from me.

I need to pee.

It reminds me of high school. Not the duck or the salad or the robots. The need to pee. Too often would I be at a high school party or a gathering at a friend’s house and despite the need to use the bathroom, I would just remain seated on a sofa or chair, for minutes, hours actually. My fear was that I would stand up, walk across the room and trip over my own two feet. And people would laugh. So I wouldn’t get up.

I’m more confident now of course. If I need to go, I go.

Sometimes the thought crosses my mind at the most random of moments, the thought that I’ve been traveling for 18 years. The funny thing is that no matter how long that thought stays in my head, a half a second or ten minutes, it always leaves my eyes ever so slightly covered in moisture. They are not tears though. It’s an impossibly thin layer of wetness that appears and then dries up almost immediately afterwards.

Is it a quick wash of these old dusty eyes? I like to believe it is the flash of a transparent curtain that marks yet another scene in this never-ending adventure.

Yes, this current scene takes place in the Canary Islands. I’m hunkered down in the town of Las Palmas on the island of Gran Canaria. We’ve rented a large apartment near the ocean, for five weeks, five whole weeks in Las Palmas, rented on Airbnb for 1000 Euros. A routine, a closet for my clothes, a renewed dedication to my push-up regimen, a sea breeze as soon as I walk out the door and two extremely chill pugs sitting on the street corner that I look forward to seeing every day.

Our apartment is far from being homey though. A couple of hallways and empty spaces too many, cold areas that seem to serve no purpose. But my stuff is scattered around nonetheless and this apartment is slowly becoming that place I return to and which I recognize. How odd indeed.

Only two small blocks from our pad on Calle Fernando Guanarteme is where you’ll find Playa de las Canteras. Sometimes I think I need the beach to be happy. It’s a golden black beach here, far from the white sands we dream of, yet it’s still an ideal location for an hour or two sprawled out on my cheap beach towel, Kindle in hand. Low constant waves, cool and lightly tinted turquoise water, topless sunbathers, flocks of surfers, views of the town and distant mountains whenever I sit up and look around.

Behind the beach sits the long boardwalk, the Paseo Las Canteras, that stretches perhaps two miles from the funky-looking Auditorio Alfredo Kraus in the south to Calle Prudencio Morales in the north. We walk much of this boardwalk every day. It’s alive with tourists, locals, cafes and bars, the occasional street performer, runners and groups of friends. I like the energy in the evening, the low lighting, the chatter, the boom of the waves.

The boardwalk is our real base. It’s the foundation of our stay here so far and unlikely to change over these five weeks in Las Palmas. There won’t be a day that we do not stroll upon it, at least once.

Fresh seafood, tapas of all sorts and home-cooked delights are found on every corner in Las Palmas, along the water, in the small, still lanes, on the main avenidas. A table on the boardwalk, a bottle of local wine, paella for two. 20 Euros. Potatoes arrugadas con mojo with grilled octopus, some grouper and a plate of fried cheese. 20 Euros. And satisfying. La Taperia, a cozy restaurant that we blindly entered on our first night, has proven to be a favorite. La Tosca Lonja around the corner served up Spanish seafood in divine form. That alluring Spanish flair helps of course, from the surrounding architecture to the bustling about of the dedicated waitstaff to the loud conversations that hum like meditative chants.

On Saturday we went for a long afternoon walk. One and a half hours each way. Through the commercial center of Las Palmas and along the other coast, the more residential and affluent section, with its streets loaded up on villas, private schools and language institutes. Twenty minutes later and things shifted. A bit darker, a bit more rundown, with people just sitting on the curb smoking their cigarettes and giving us a quick, grumpy ‘what’s your deal?’ kind of glance. And then another street crossed and we found ourselves in the most quaint and atmospheric neighborhood yet, and we cut straight through it along the overly pleasant pedestrian lane of Calle Perez Galdos, with its sense of art, active residents, attractive eateries and charming street lamps.

Las Palmas has it all.

After some time lost in conversation and smiles, we came upon an old, blue, mint condition palace. It’s now a music conservatory. We passed a small park with a colorful playground. And then a Burger King and the Catedral de Santa Ana before we landed on the steps of the Casa de Colon, right among the weathered, empty structures and narrow passageways of Vegueta.

We spent an hour wandering this museum, sprawled among four historic, connected Canarian homes, all while learning about Cristobal Colon, or Christopher Columbus. We also battled two giant parrots that fiercely guarded a courtyard leading towards the exit. Columbus visited the Canary Islands on several occasions. The first time in 1492 in order to stock up his fleet and fix a rudder on the Pinta before heading off towards the unknown. It appears he spent several weeks in Las Palmas too.

Columbus seemed unable to sit still. Each time he returned home from a voyage, he soon set off for yet another.

I also have trouble sitting still. Maybe that’s why I worked on cruise ships at one point. The constant journeys to New Worlds. New Worlds to me at least.

When I stay in one place, I do get anxious. It’s as if my body and mind still think we are constantly on the go. They get confused by the closet with my clothes inside, by the sight of the same bed for more than a few nights, by the lack of urgency to explore. As I attempt to sit quietly, they instead shout, “Do this, do that. We must do and see everything there is to do and see here by this Friday.”

Last night on a stroll through the lively Parque de Santa Catalina I actually saw two cruise ships docked in port. As always, I was nostalgic for a few moments as I recalled my old teammates from around the world and those quiet times when I just stood on the open deck watching the flying fish and wondering what lay beyond the horizon.

But these two mighty vessels I saw yesterday, and all their passengers, would of course be gone by morning, without me. As would the flights and buses and trains of the world.

Now I shall stay put. An exchange of New Worlds for New Experiments.

And what better place to give this a shot than Las Palmas. Life is easy here. You can enjoy your surroundings within minutes of arrival and there really isn’t much to worry about. Food, people, atmosphere. Easy.

My eyes have watered again. 18 years. I feel hungry right now as I sit here at the Coworking Canary Islands location in Las Palmas. The one with the robots on the walls and the long white table. And the duck staring me down.

I start to think of volcanoes and ferries. But then I think of making a salad in my kitchen.

This is me trying to make sense of being a traveler in one place for some time.

I think I can handle five weeks in Las Palmas. I’m excited to find out.

Thoughts on slow travel? Have you been to the Canary Islands?