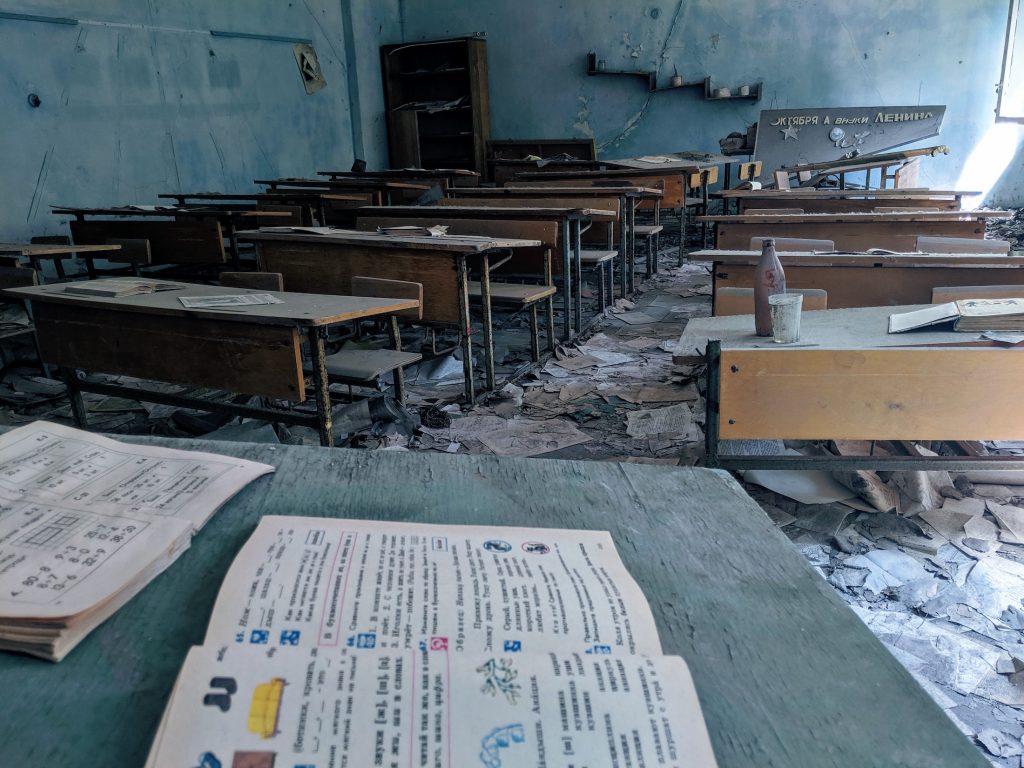 I thought it would only be about abandoned buildings. And while we did visit and wander through dozens of schools, cafes, bus stations, hospitals, hotels, boat houses, supermarkets, television shops, summer camps, and a ton of more places, the experience of a Chernobyl trip went far beyond all of that.

It was eye-opening, educational and very raw, all in one. We stayed in an old Soviet hotel in Chernobyl city, the only working town in the exclusion zone and home to several thousand people, almost all of whom work in some power plant / disaster related job. The rest of the population in town run the shop, two hotels, restaurant and other small businesses that support the workers.

Each day of our Chernobyl trip we learned more about the 1986 disaster, with our excellent guide, Nazar, providing details and information about every single site that we visited.

In between the education, I was left to stare out the window of the van or walk quietly along paths that meandered through the spectacularly overgrown forest, pondering the remains of a once flourishing region. I was left to try to comprehend the masses of people whose lives were uprooted and left behind, all within a few quick days (or slow days depending on how you look at the response to the disaster). Sure enough, I found myself equally affected by the stories of those who sacrificed their lives to ensure the disaster didn’t escalate even more. And by those who knew the risks but decided to play a major role in securing and cleaning the area nonetheless.

Even today, there are still a couple of thousand people who work at or near the nuclear reactor, in various capacities. They spend 15 days in the exclusion zone and then they’re required to leave the zone for 15 days before they can return. Such workers include scientists, security personnel, contractors, technicians, engineers and more.

Again, this Chernobyl trip was far from a mere stream of photo opportunities.

Did you know that Sweden played a crucial role in uncovering the disaster?

Sweden detected radiation soon after and in their search for the source, they put pressure on the Soviet Union to confess if something had occurred. Had Sweden not detected the radiation and forced the Soviet Union to admit the situation, who knows if we would ever know what actually happened. And that would have been even more dangerous. Places Visited During My Chernobyl Trip

As we traveled around, there were indeed the checkpoints, the bursts of radiation in certain areas, the feeling of desolation and the disgust at how the situation unfolded. There were the lunches at the local canteens, the memorials and the sad tales around every corner.

But at the same time, most of where we went inside the exclusion zone had a radiation level that would not be considered terribly excessive. The reason, I learned, is that the radioactive elements are heavy and as a result, have sunk into the ground by this stage.

We still found areas with levels as high as 10 uSV (microsieverts) and one piece of machinery that was a very high 750 uSv, but most places were between .4 uSv and 1 uSv on the Geiger counter radiation detector.

As the days passed, I saw the abandoned ferris wheel and the main square in Pripyat. I stood in front of the now covered Nuclear Reactor #3 where the disaster all began. There was a massive, rusted 1920s steamboat we climbed around, stuck in the mud near the Belarussian border. The piano shop was simply eerie, with rotting pianos lying silent all around the room. The once grand swimming pool, the isolated summer camp on the shores of a river, the massive Duga radar station and an abandoned school deep in the woods along a road that seemed to receive no traffic for a long time. Dusty doll heads, broken desks, a boxing ring.

Dental implants and vials of chemicals, huge propaganda posters sitting behind a massive stage, an open purse on a kitchen table, in a house that was clearly abandoned in an instant.

A boat house, a rusted bus, a field of huge silent tractors. A cafe with impressive stained glass windows, a supermarket with shopping carts still scattered along the aisles, a room where soldiers studied the various missiles that might one day attack the Soviet Union.

Paperwork and school books, toys and broken televisions, old drink dispensers, gas masks and scattered clothes. Everywhere we went, every day, was a trip deep into the abandoned lives of thousands of people, into the stories and education and work and social activities of those who once called the region home. 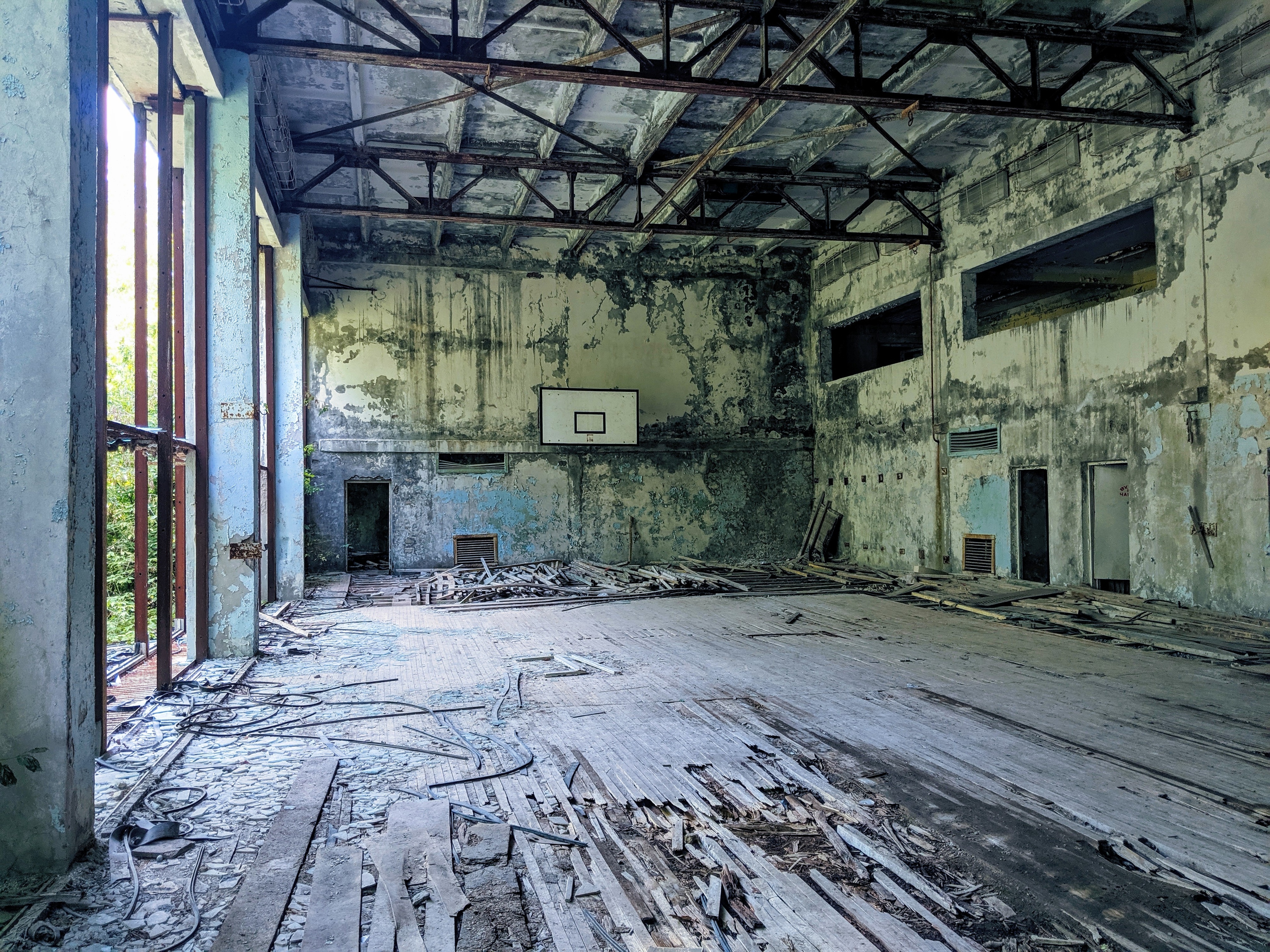 And then, there was Vasily. One of 170 remaining re-settlers, this kind, golden-toothed 64 year old man returned to the exclusion zone shortly after the disaster, unwilling to have his life uprooted.

Today he lives way in the countryside, in an otherwise empty village located a one hour drive from any other sign of civilization, a village that can only be reached along a narrow, terribly pot-holed, completely forgotten road.

Vasily lives in an abandoned village, in a simple, but warmly decorated home. He grows an incredible amount of fruit and vegetables on his land, with beautiful looking cabbage, apples, plums, potatoes, berries, pumpkin, eggplant and more filling up the fields. He also raises chickens and some ducks, feeds the local storks and makes his own liquor, even though he doesn’t drink.

He leaves the village 1 or 2 times per year, that’s it. 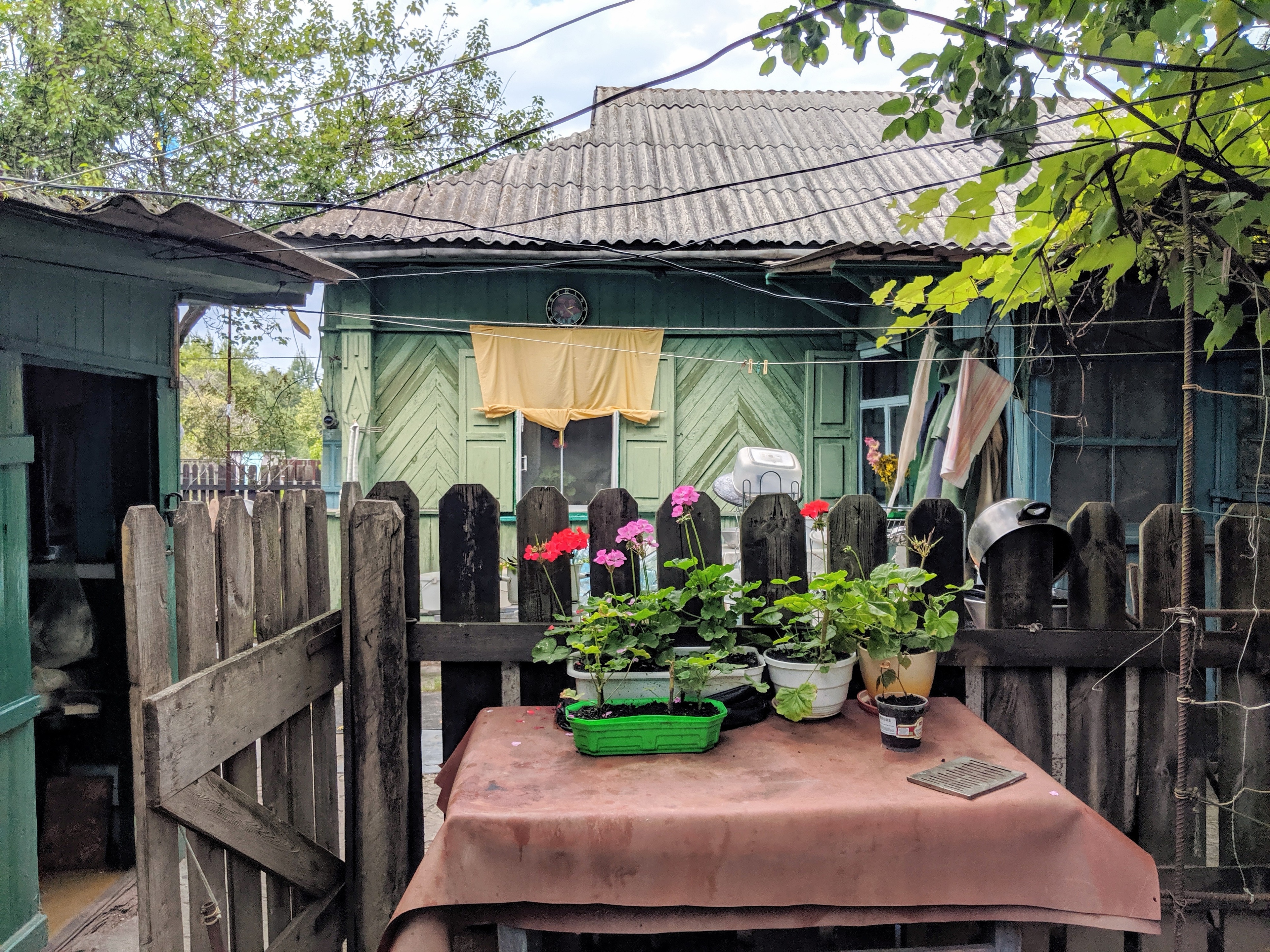 Our guide knew of Vasily but had never been to his village in the 7 years he’d been leading Chernobyl trips. He decided to take us out there on our third day.

What was supposed to be a quick stay to say hello turned into 5 hours as we dined on a wonderful spread of food – salads, eggs, stuffed tomatoes, sweet bread and of course some shots of his homemade brandy. Generous with his time and happy to have visitors, we asked him endless questions and listened to his stories of life before and after the disaster as we continued to nibble on the endless plates of food he served us.

And while you might hesitate to eat from his garden, the radiation level in his village is around .4 uSv. To give you an idea, a chest x-ray is about 100 uSv, some 250 times as strong. Even with that, Vasily’s health, his house, his land, chickens and even his cat are checked twice per year by scientists and doctors to ensure that it continues to be safe for him to live in this area. 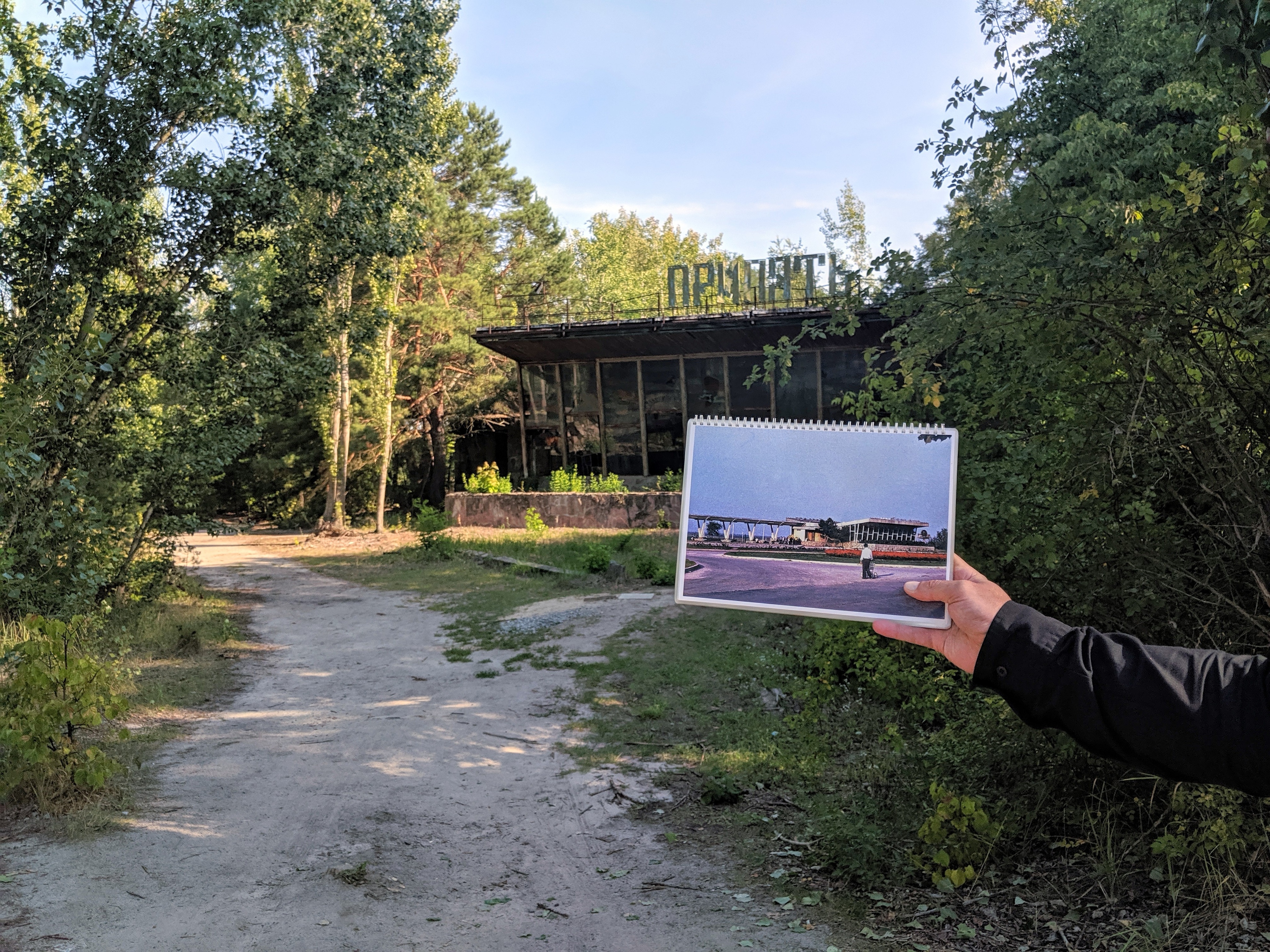 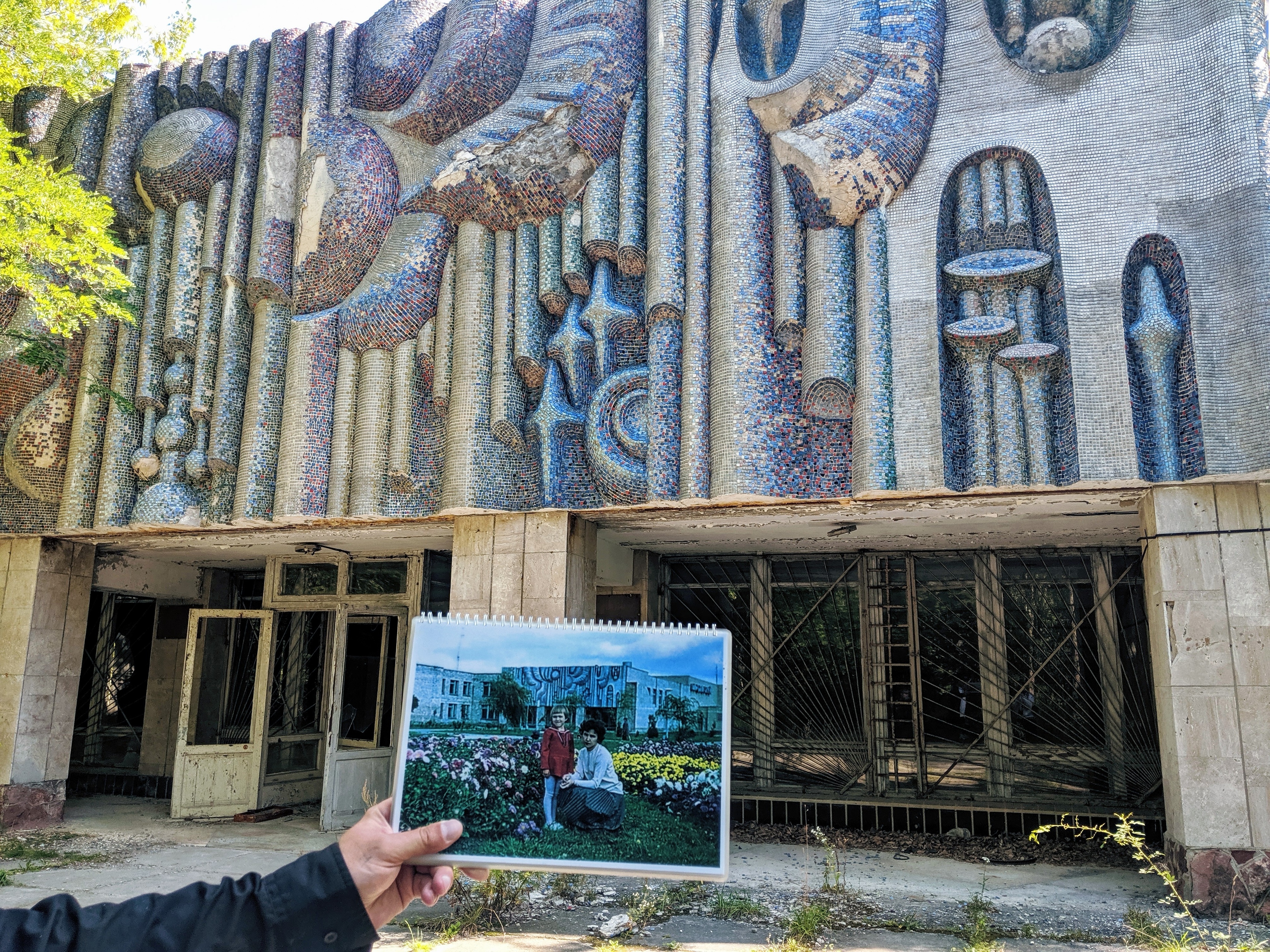 On our last day of this Chernobyl trip, I woke up in my simple yet somewhat cozy room at the Hotel Pripyat, took a shower in an impossibly small tub and soon found myself eating eggs and pancakes for breakfast. Life in Chernobyl city was remarkably normal considering the devastation that lies only a few kilometers away.

We passed through one last checkpoint, each of us standing inside a radiation detection machine in order to ensure we were radiation free. Then we handed over our lanyards/personal radiation detection devices that we were required to wear during our stay and we crossed the ‘border’ out of the exclusion zone.

And that was it. The Chernobyl trip was over and the exclusion zone was left behind, in a much different fashion than the thousands of people who had no choice back in 1986.

Quick Tips for Your Chernobyl Trip

I highly recommend visiting Chernobyl if you get the chance and I definitely recommend doing a multi-day trip.

A one day trip simply covers the same handful of sites that 95% of visitors see. If you spend a couple of nights in the exclusion zone, you’ll get to visit endless locations that very few people get a chance to explore.

In our 4 days, we saw almost no other tourists apart from at our hotel and at a couple of monuments in Chernobyl city. Everywhere else, we basically had to ourselves, all day, every day.

And while the temptation is high to turn a visit to Chernobyl into one big Instagram photo session, something important is definitely missed if you do. It’s worth taking time to learn as much as you can and to really appreciate the scale of the disaster and its effects. It’s quite an intense and draining experience when you do but it’s extremely valuable nonetheless.

Any questions? Just send me a message and I’ll be happy to assist!

Looking for more photos from my Chernobyl trip?